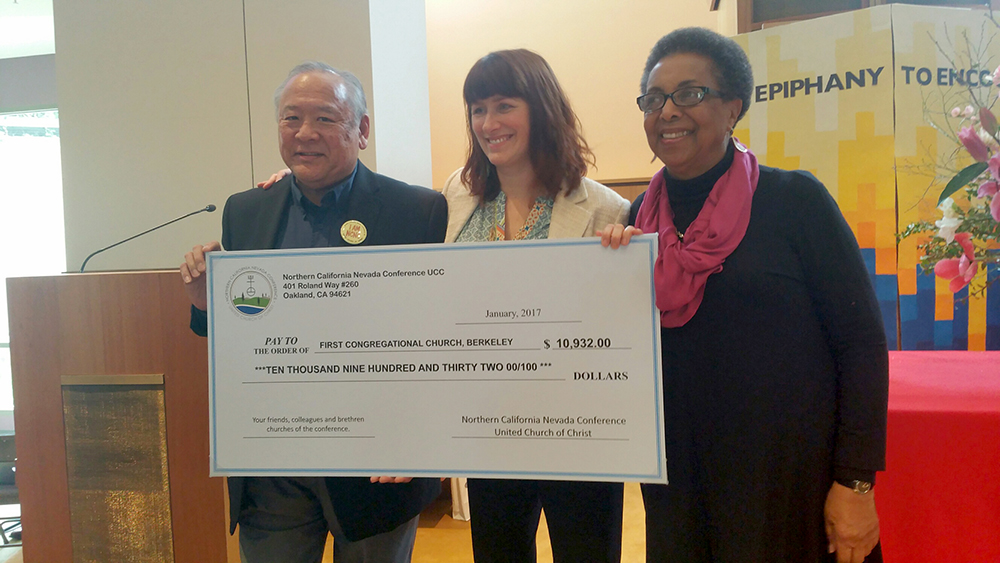 Work is underway to repair the sanctuary roof of a historic United Church of Christ congregation in California that was badly damaged in a September fire. To help with recovery costs, First Church UCC in Berkeley, which could be back in its sanctuary by May or June, has received the support and generosity of its neighbors with, so far, more than $100,000 in donations.

"I think this is primarily what is keeping people's spirits aloft," said First Church Senior Minister the Rev. Molly Baskette. "Though nine months is a long time to be displaced from our worship space, it's so much better than three or five years."

Representatives from the Northern California-Nevada Conference gave a gift of more than $10,000 to the congregation at the beginning of February.

Dick Hom, moderator of the Pacific Islander & Asian American Ministries of the UCC, and Eunice Aaroner, council president of the Northern California-Nevada Conference presented a check for $10,932 to Baskette during the church’s annual meeting. Another member of the church made an on-the-spot donation that put the total contribution beyond $11,000.

Roy Mosley, conference moderator, and Hom said they wanted to show their support for First Church and planned a fundraising campaign, “Raise the Roof.” They encouraged churches, members and colleagues of the Northern California-Nevada Conference to help with the repair costs related to the fire. They also planned two music concerts that included performers from churches within the conference.

"The concerts were so joyful and wonderful. They did so much to raise our spirits and make us feel so connected and cared for by our wider UCC," Baskette said.

The building was constructed in 1925, and the congregation traces it roots back to its formation in 1874. In the liberal town of Berkeley, the church is well known for its progressive theology. Much of the fire damage was to Pilgrim Hall where the offices and an assembly area are located.

First Church carried a multi-million-dollar insurance policy, of which it has received a partial payment of $6 million. The congregation expects to receive more once the final costs of the fire are tallied. That annex building is unstable and unsafe for entry, and it may cost First Church more to update the building and bring it up to code, or to expand the space.

"We have just launched a Blue Sky Team made up of folks of all ages [and] tenures at the church to guide the wider congregation through a visioning process for how to rebuild the building that was far more damaged, Pilgrim Hall," Baskette said. "We will take into account green building standards, universal accessibility as well as considering rebuilding bigger (taller) in order to better serve our wider community, possibly with an affordable housing component or non-profit space. All options are on the table right now! The time line for that rebuild is far longer — more like 2.5 to 5 years."

In the sanctuary, it will take an estimated three to four months to complete the repairs to the roof. The final steps include replacing water-damaged carpet and re-installing the pews — which were removed for the duration of the reconstruction.

While waiting on completion of the worship space, the church is renting space from a Jewish congregation, Congregation Beth El, for weekly services. "We have had some joyful, meaningful collaboration with them — for example they have invited us to their Passover Seder, which we will attend and help prepare, and are doing entirely en lieu of a Christian Maundy Thursday service," Baskette said. "People are finding out just how strong and resilient they are, and are enjoying a newfound intimacy in the wake of the fire. It has also forced some cultural shifts in our congregation which are so welcome — for example, coffee hour, before a slender affair that was over before you knew it, has become an all-out feast as many more people home cook for it, and linger to deepen relationships."