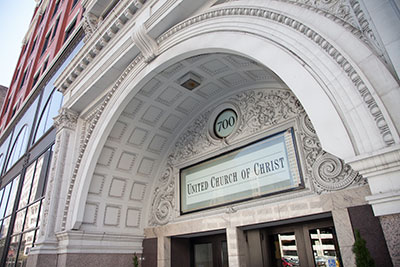 A reorganization of the United Church of Christ national offices was announced on Oct. 5, consolidating the departments of communication and philanthropy, and finance and administration. The new organizational structure also distributes oversight of the workforce among the three national officers of the church and realigns the work of Justice and Local Church Ministries.

The restructure, which is creating several new roles, also prompted a reduction-in-force, with fourteen employees notified that their positions had been eliminated.

"I call for prayers for all those who were let go," said General Minister and President John Dorhauer. "They gave many years of faithful service to this denomination. Their work, their passion, their commitments helped shape what we have become. I call for prayers for co-workers here who are their friends and companions – and who now grieve the absence of those companions."

Two years of preparation has gone into the staff reorganization, one which clarifies the mission of the United Church of Christ and aligns the national setting workforce to better articulate the vision and the goals of the denomination. The move is expected to save more than a million dollars in 2018.

Much of the structural staff changes come in the Office of General Minister and President. The creation of an Office of Philanthropy and Marketing reshapes the departments of Publishing, Identity and Communication (PIC) and the Office of Philanthropy and Stewardship (OPS) under one director who will be named after Jan. 1. Current directors, PIC's Tina Villa and OPS' Mary Paxton, will transition the work in their areas until the end of the year.

This combined marketing/philanthropy team will work to drive clear and consistent messaging to engage the UCC audience and to inspire giving at every setting of the church.

To support that mission, two new manager positions, for web strategies and for grant writing, have been created to integrate web platforms to curate UCC story-telling to make the case for financial support, position the site as a gateway to cultivate prospective donors, and transition grant writing to full-time focus. The national setting has also enhanced support around meeting services and has contracted with a consultant to examine ways of boosting IT resources.

Administrative and financial functions will be consolidated to maximize shared services in the areas of finance, property management & insurance, technology and building operations. Chief Financial Officer Steve Jones will manage the combined functions, reporting to Moos. The position of Chief Administrative Officer will be eliminated at the end of the year, and Lee Foley will be available until that time to transition the work of the CAO.

"The work of Local Church Ministries and Justice and Witness are intertwined. Romans 10:14 comes to mind," said Blackmon. "The ekklesia, the church, the gathered body of believers called out from various places for the purpose of advancing the message of the gospel, requires both the message and the messengers. I look forward to new insights and greater reach through the intentionality of maximizing our intersections."

"The next few months will be a time of deep transition and change," said Dorhauer. "We will be looking to nurture the development of new teams, new collaborations. We will be refining in greater detail work that will no longer be carried out by the national setting. We ask not only for your prayers, but your patience. We have an enormously talented, and for a time short-handed, staff that will seek to transition to new orientations, new responsibilities, and a new future."

In addition to the staff changes, the national setting is reducing its travel budget, and looking at changes in health care benefits to meet a goal of realizing $1.4 million in cost savings.

"We are committed to aligning the National Setting with where we hear the Spirit leading us," Dorhauer said. "There is joy and hope in that. The pain and grief that accompany this, however, is felt deeply when good people, hard workers all, are transitioned out to make room for new positions we deem mission critical. It will take some time for these wounds to heal. Our fervent prayer is that God's Holy Spirit abide with us through this. For a season we grieve. May the hope of the Risen Christ, and the deep wells of faith that sustain us, strengthen us for the work to which we are called for the sake of a mission that matters."