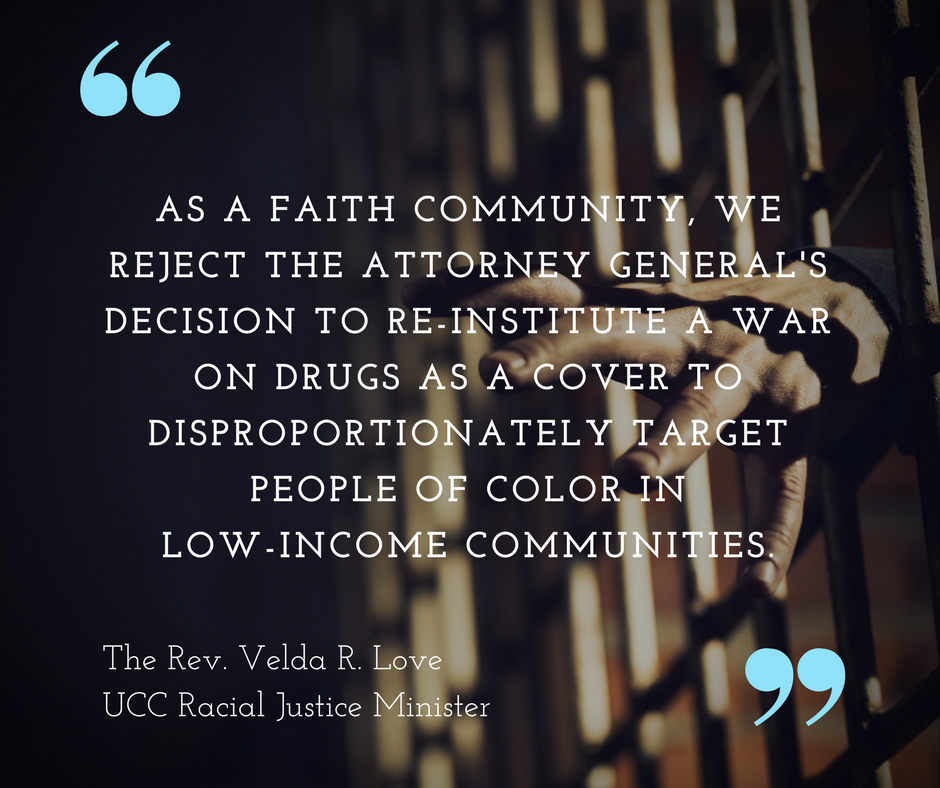 Critical of new guidelines from the U.S. Department of Justice outlining tougher punishments for nonviolent drug offenders, United Church of Christ racial justice leaders are calling on the wider church to protect vulnerable communities and to renew their commitment to justice.

In an eight-paragraph memo, Attorney General Jeff Sessions instructed federal attorneys to seek maximum sentences — including mandatory minimums — in a reversal of Obama Administration policy that sought to ease punishments. The guidelines were released on Friday, May 12. UCC leaders are fearful the policy shift would resurrect the war on drugs from the 1980s and 1990s that led to a disproportionate number of incarcerations of black men.

"As a faith community, we reject the Attorney General's decision to reinstitute a war on drugs as a cover to disproportionately target people of color, and low income communities further by instructing prosecutors to pursue the strictest charges and sentences in the handling of drug cases," said the Rev. Velda Love, UCC racial justice minister.

"The United Church of Christ remains a faithful witness and advocate for criminal justice reforms and an end to the disproportionate number of people of color within the prison industrial complex," Love said. "We stand solidly on the biblical principle that all humans are equal."

Sandy Sorensen, director of the UCC policy advocacy office in Washington, D.C., said there is widespread, bipartisan support that the criminal justice system needs reform and that mandatory minimums should be eliminated. "Members of Congress on both sides of the aisle, along with significant progressive and conservative voices, know this and have been working toward agreement on legislation to begin to reform the criminal justice system," she said.

According to 2014 polling from PRRI, a nonprofit and nonpartisan research group, 77 percent of the country believes that mandatory minimums should be eliminated for non-violent drug crimes — including 83 percent of Democrats and 66 percent of Republicans.

Given that data, Sorensen believes that Sessions' actions take the country "180 degrees in the wrong direction. To have this directive come from the Justice Department is the ultimate hypocrisy," she said. "And, it is a reminder for us as justice advocates that we can never rest in this work, even as we make steps forward — as we have in the last session of Congress, where we came so close to passing some of the most meaningful criminal justice reform legislation in decades."

"Faith voices were absolutely critical to this work, and they will be critical now," Sorensen said. "The witness of many conferences in the UCC led to several significant resolutions in 2015 on the need to change the criminal justice system and the systemic racism at its heart. It also helped to initiate a national UCC conversation among advocates committed to addressing the need for criminal justice reform and the virulent racism it embodies.

The 30th General Synod of the UCC (2015) identified mass incarceration as a critical human and civil rights issue and, through the passage of two resolutions that summer, resolved to turn the tide of institutionalized racism and economic injustice within mass incarceration.

Love and Sorensen encourage the wider church to protest about the Department of Justice's changes by educating members about their rights against racial profiling, how to respond to police harassment or arrest, and knowing local pro bono and civil rights attorneys.

"Given the announcement of Attorney General Sessions," Sorensen said, "this is a critical time to re-engage this work."