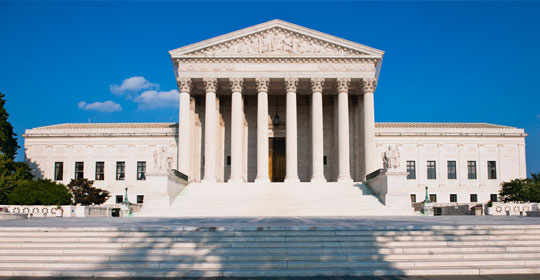 The NFL's Washington Redskins may have the legal ground to continue using their nickname — which has come under fire because of its derogatory nature toward Native Americans. But racial justice advocates of the United Church of Christ believe the team still lacks the moral standing to keep the racially demeaning name.

The U.S. Supreme Court on Monday, June 19, struck down a law that prohibits the government from registering offensive trademarks because it infringes on free speech. The ruling is expected to help the NFL team's legal battle over its nickname.

"The term 'Redskins' was imposed upon Native people in this country," said the Rev. Velda Love, UCC racial justice minister. "It symbolizes the diminution of Indian people into being both less than human and savages. The truth is this nation was built on the genocide of the Indigenous peoples. Using Indians as a mascot is another form of European invasion, appropriation, and white privilege."

The court's ruling was a victory for an Asian-American rock group that wanted to trademark its name, and was closely watched for its potential impact on sports teams (such as Washington's football franchise and the Cleveland Indians baseball club) and schools who use native imagery and nicknames. Washington lost its nickname trademark when it was revoked in 2014.

The Rev. Alex Vishio, assistant minister for social justice and witness with the Central Atlantic Conference, believes the Supreme Court's ruling raises questions about the distinction between speech that offends and speech that has been shown to be harmful.

"While you can't ban speech that offends someone, what about speech that has been shown to harm individuals and youth?" Vishio said, pointing to the American Psychological Association's recommendation in 2005 to drop all use of native-themed mascots, nicknames and logos.

"We still hold that it's morally impermissible, and our position does not change in principle," Vishio said.

The General Synod of the UCC passed a 2015 resolution that called the church to boycott the franchise's merchandise and all games until the team changes its nickname and logo. Prior to that, the 2013 General Synod adopted a resolution for the church to repudiate the Doctrine of Discovery, which authorized the genocide of Indigenous peoples and the theft of their lands by asserting non-Christian lands could be possessed by those discovering them.

"This doctrine is still operative today in U.S. law and in international law," Love said. "It continues to have serious impact on the ordinary daily lives of contemporary Native American communities. Therefore, we, the United Church of Christ, stand in solidarity with American Indian people opposing the use of the name 'Redskins' and the logo."