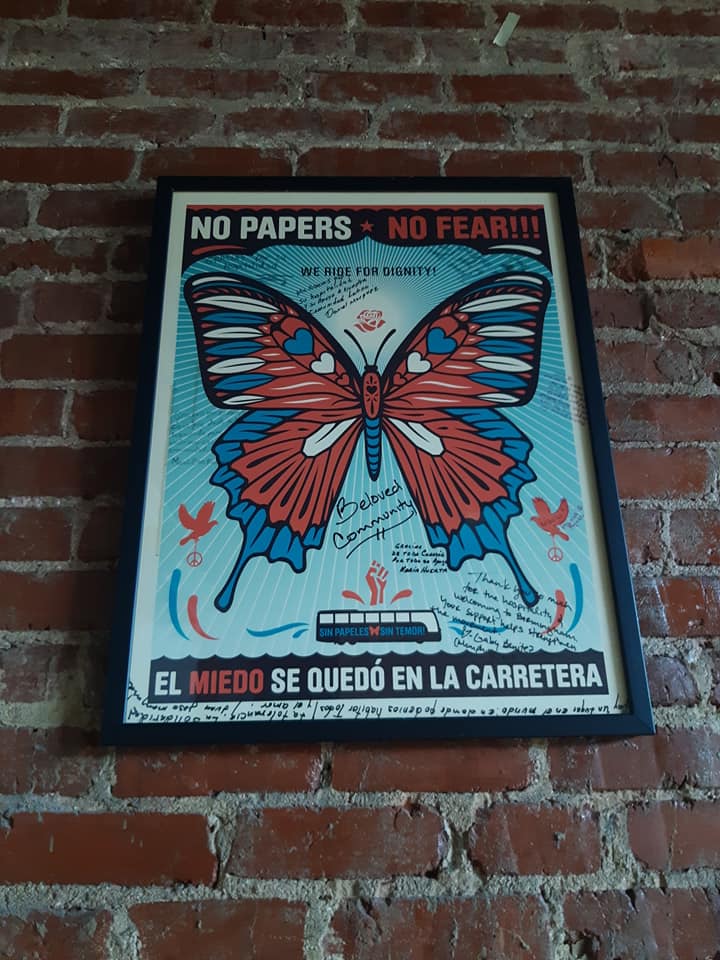 A diverse group of religious leaders in Birmingham, Ala., have forged a commitment to sanctuary for their migrant neighbors, proclaimed their stand publicly and are planning a practical response to possible Immigration and Custom Enforcement action.

Forty-seven clergy and faith leaders representing several theological perspectives and traditions have signed a “Proclamation of Sanctuary,” affirming their houses of worship as sanctuaries for those seeking refuge. “We will not allow immigration authorities to enter into our houses of worship without a warrant signed by a judge,” the proclamation states.

United Church of Christ congregations are integrally involved in the effort. Five signatories are UCC clergy.

The Rev. Jennifer Sanders, pastor of Beloved Community Church UCC, said the public statement is part of a strategic approach to inspire both action and conversation. “What can you do and what can you commit to? It’s important have those conversations ahead of time so you are prepared should the need arise in your community,” Sanders said.

The grassroots network of Birmingham clergy, organized in 2017, "appalled by the hostile policies applied to immigrants and asylum seekers," came together again recently to prepare an organized faith response after mass ICE raids in neighboring Mississippi.

"We are taking our cues from local immigrant justice groups, as allies, in solidarity and consultation with the people affected," said Sanders. "We are asking what we can do to be useful."

To prepare to act at any given moment, the Beloved Community congregation hosted a "Sanctuary in the Streets" training on Monday night, Aug 19. The exercise, part of an ongoing commitment to immigrant justice at Beloved, aimed to prompt thinking through a crisis response. 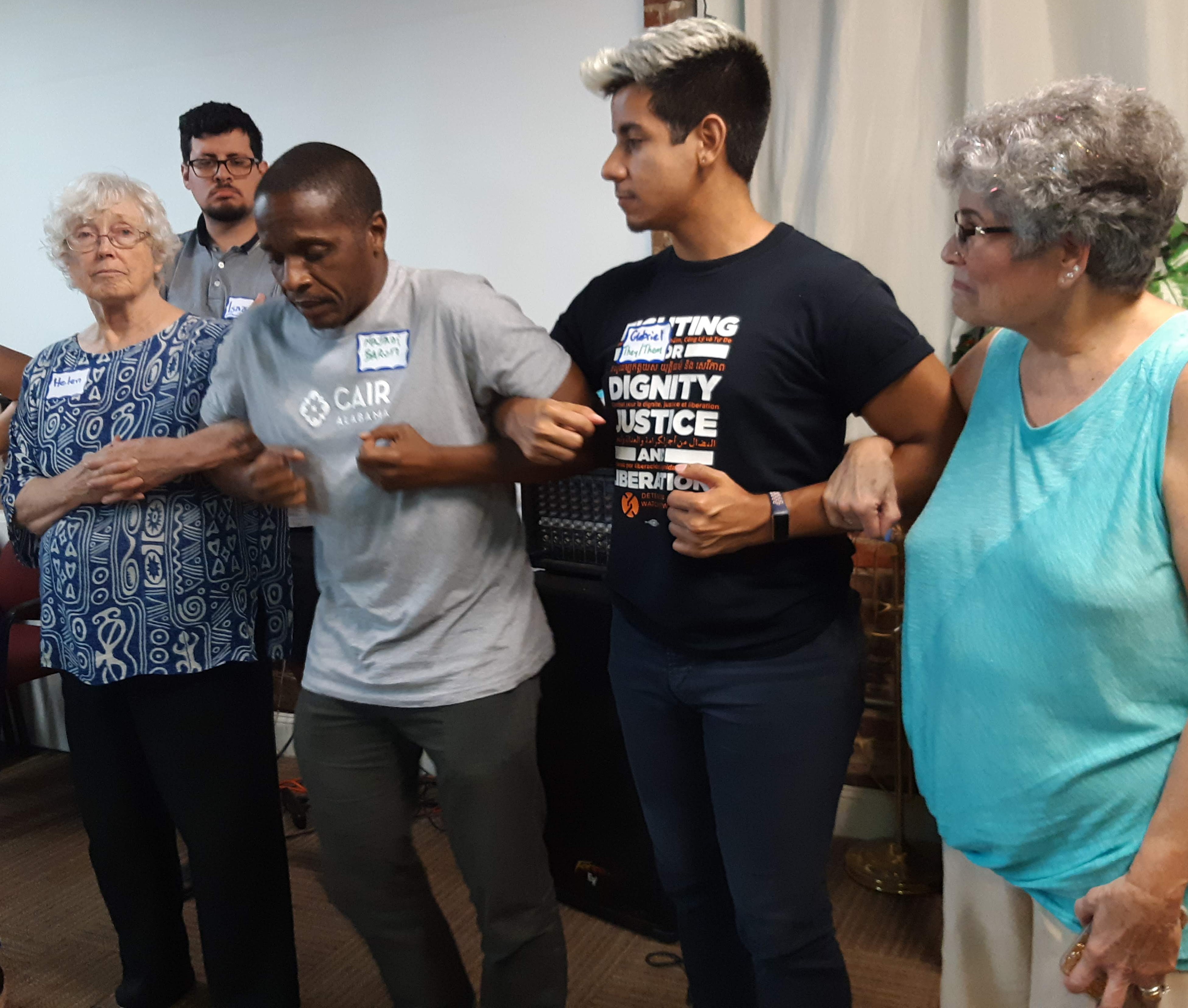 "Sanctuary in the streets training creates a direct action triggered by an ICE presence – part of a rapid response process," Sanders said. It’s place-based sanctuary. "Preparing people to show up in an organized fashion when ICE shows up. And creating a space that is claimed as sanctuary in that moment. Maybe with a worship circle. Maybe with a faithful witness. Maybe by putting bodies on the line. We want to interfere with ICE’s action in a given moment."

Goals of the grassroots faith network include turning people out to be an ethical witness, supporting existing efforts by local immigrant justice organizations, hosting conversations about place-based sanctuary and rapid response and educating the community about issues in general.

"The letter makes it clear that there are people here that care about this issue," Sanders said. "My goal in having people read this is for others to say, 'Here are some ideas how to implement this in our own setting.'"

Here is the text of the letter:

Though we represent diverse theological perspectives and traditions, our mutual commitment to the sacred and ethical treatment of our neighbors transcends boundaries: we believe in loving our neighbors as ourselves, in doing no harm, and in seeking the best for every member of our community. We believe that our ethical and theological commitments require us to take a stand against policies and language that dehumanize our immigrant siblings.

Our faith communities have watched with growing astonishment the racist, xenophobic, and violent rhetoric from our national leaders, and we see how this language is used to vilify both documented and undocumented immigrants. We are appalled by the hostile policies applied to immigrants and asylum seekers. And though we love and support members of law enforcement who seek to serve and protect their communities, we lament the way law enforcement policies have been weaponized as part of an agenda to promote ethnic nationalism. We are resolved to resist the dehumanization of our neighbors, and stand for their human and civil rights.

To that end, we affirm that:
· Our houses of worship will be sanctuary for those seeking refuge. We will not allow immigration authorities to enter into our houses of worship without a warrant signed by a judge.
· Those of us who cannot safely offer sanctuary will actively and intentionally support those who do open the doors of their houses of worship to provide sanctuary to those who are being targeted by immigration enforcement operations.
· Following the lead of the communities who are most impacted, we will take action and speak out when ICE raids target our neighbors.
· We will challenge xenophobic, racist, and white nationalist rhetoric both inside and outside our places of worship. We will seek to create intentionally inclusive and accepting worship spaces that protect the rights and dignity of all human beings.
· We also call on our elected city and county officials to refuse to comply with federal infringement on the rights of our neighbors; specifically, we call on [Jefferson County] Sheriff Mark Pettway to no longer detain community members without a warrant or transfer them into ICE custody.
· Stories from our faith traditions are full of saints and holy ancestors who stood up for the rights of their marginalized neighbors, or who opened their doors to strangers and were blessed by visiting angels. We stand firmly on our scriptures and our traditions that this witness is necessary, timely, and in keeping with our faith.