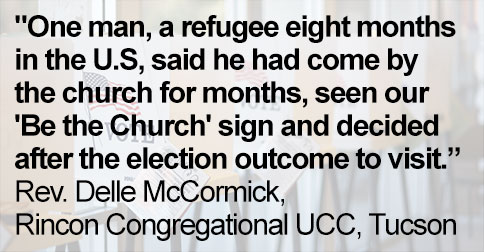 On Sunday, the first since Donald Trump was elected the next president of the United States, UCC clergy from Asheville N.C. to Tucson, Ariz., and Brooklyn, N.Y. noted more people in the pews during worship.

"Both services were more crowded than usual," said the Rev. Delle McCormick, who pastors Rincon Congregational UCC in Tucson, Ariz. where Nov. 13 attendance was up by 30 from the week before. "We had about 20 visitors between the two, mostly people who came in solidarity with a brave and bold church and/or needed a safe place to worship."

McCormick, who "absolutely" believes Rincon's visitors were drawn to find community in church because of the presidential election, took the time to talk to all of them. She shared the stories of a few.

"One man, a refugee eight months in the U.S, said he had come by the church for months, seen our 'Be the Church' sign and decided after the election outcome to visit. He said he would be back. A young white couple who visited for the first time said, after hearing a strong message about our work ahead as followers of Jesus, that they wanted to join. A group of three people of color who looked worried and fearful visibly relaxed after being welcomed warmly and even more as they listened to the message. A gay man whom I met at our local grocery cooperative and has said he would like to visit our church for the past three years, but never did, attended yesterday and wept visibly. Afterward, he hugged me and said he would be back."

McCormick has spent much of the last week listening, ministering to a number of people who have shared troubling experiences.

"Since the elections I have heard from church members and friends that they and their children experienced racist, sexist, and homophobic epithets. One woman was walking with her two girls in a public park and a man yelled at them that now men could do anything they wanted to women. Her girls were afraid to go to school the next day."

"After a terribly hard week of accompanying so many people who are angry, sad, and scared, Sunday services gave me the strength to get up and do the next right thing," McCormick continued. "Ministry is both soul and life-saving - we have always lived into that truth. But that was never more clear than yesterday."

The Rev. Sara Wilcox, the founding co-pastor of Land of the Sky United Church of Christ in Asheville, N.C. agreed. 210 people came to worship, significantly more than the  average of 150 on any given Sunday. Wilcox and her co-pastor the Rev. Amanda Hendler-Voss noted a jump of more than 30 worshippers from the previous week, and welcomed 19 new faces.

"On top of visitors, the service also saw a handful of long-time friends who had not been to church in a quite some time," said Wilcox. "They all came seeking sanctuary from the heavy weight of the world. Many of them posted on social media how grateful they were to receive the space of community as a place of healing and hope."

"We do believe that the election results brought people to church," she continued. "Our visitors seemed to be in a place of struggle, more than usual.  A father who was visiting questioned how the results were possible and where compassion can be found. Another woman shook hands (with us) and started to depart, but turned around and came back sharing she needed a hug."

Land of the Sky also held a 'Service of Lament and Hope' Wednesday night with a sister church which drew 80 to the sanctuary on the evening following the election.

"People were invited to sing a song, bring poetry, or a testimony of lament.  The offerings were sacred and beautiful, raw and true," Wilcox said. "The service brought folks from other faith communities, and no faith community. It involved tears, anger, and despair and it led us to proclaim the promise of love, hope and community."

The Rev. Ann Kansfield, a UCC minister who co-pastors Greenpoint Church in Brooklyn, N.Y. said she had a full house on Sunday with 100 people in worship, including several visitors.

"I think the election results have created a sense of uncertainty among people," Kansfield said. "Many people have said that they feel as though they are mourning a loss of something. My sense is they came to church on Sunday looking for a word of hope."

Kansfield and one of the other pastors pointed out that this type of reaching out, relying on faith in a time of uncertainty, is certainly not limited to their churches, and expects it is happening across the UCC and in other faith traditions as well.

"I have seen so many arrive stunned and scared and sit weeping in the pew. Love and genuine appreciation and celebration of all God’s people melt fear and allow for healing and spiritual growth," McCormick noted. "Having a community of support improves the spiritual, mental and physical wellbeing of those who feel excluded, abandoned, isolated, and lonely. And those who are almost always welcome wherever they go are also transformed in the relationships that evolve."

Kansfield's wife and co-pastor the Rev. Jennifer Aull 'Here I Am: Bringing All Our Feelings to God.'

At Land of the Sky, Rev. Hendler-Voss preached "Be The Church."