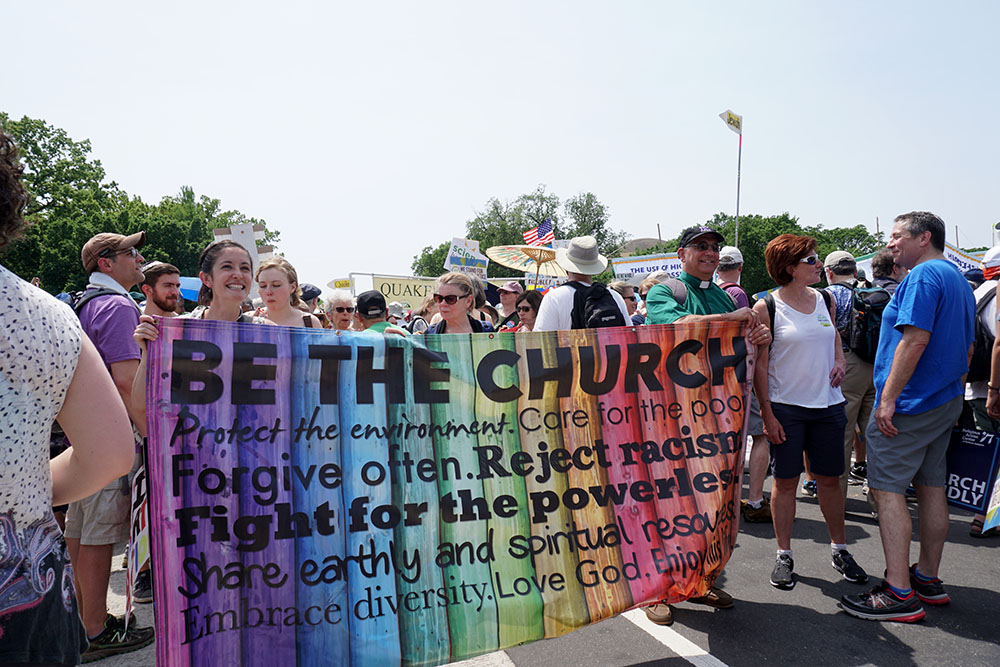 Building on the momentum of the People's Climate March, the United Church of Christ is endeavoring to build a partnership centered on climate justice with the like-minded people of 350.org. That framework, a pilot project just announced this week, invites green teams of the congregations of the UCC to affiliate with the grassroots organization that began mobilizing in 2008 to create a climate movement that "holds our leaders accountable to the realities of science and the principles of justice."

"Strength and vitality are found when 'I's' become a 'we.' A march (like the People's Climate March) is a tangible way in which a bunch of 'I's' become a 'we,'" said the Rev. Brooks Berndt, UCC environmental justice minister. "The task before us now is to build and strengthen that 'we' through effective partnerships."

Two hundred UCC activists were among the 200,000 who turned out in Washington, D.C. to march for environmental justice on April 29, with more taking part in 370 sister marches across the country for climate, jobs and justice. In a post-march conference call on Thursday evening, May 11, more than 2 dozen people gathered to plan the 'what next.' 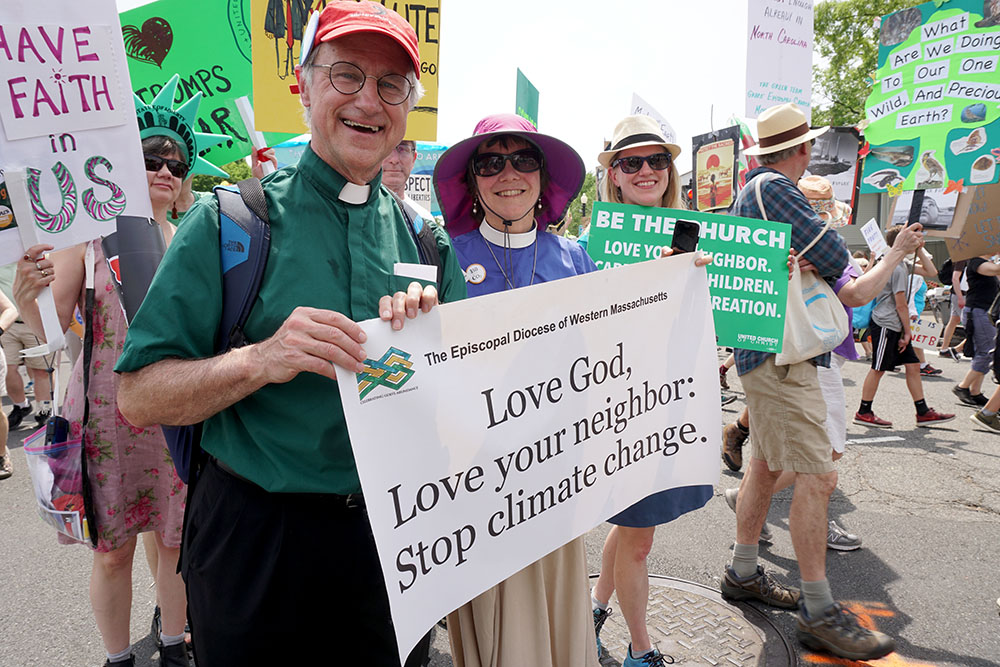 A partnership with 350.org on the local level in communities around the country just seemed to make sense to Berndt, to the organization, and to the Rev. Jim Antal, one of the denomination's longtime leaders in climate justice.

Antal partnered with the founders of 350.org before they even settled on that name. The number 350 means climate safety — reduce the carbon dioxide in the atmosphere from more than 400 parts per million to below 350.

"Their vision, passion, and recognition that intergenerational witness could change the course of history is what drew me in," said Antal. "I've joined them on three occasions in actions of civil disobedience, and each time I was impressed by their on-the-ground strategic expertise, coupled with the overall vision that informs and inspires each action. Leveraging the power of the church to address the most significant moral issue humanity has ever faced is critical. I have found 350.org to be an inspirational partner in this prophetic witness."

So has the Rev. Meighan Pritchard, a UCC environmental justice curriculum trainer and pastor of Prospect UCC in Seattle.

"In September 2016, 350 Seattle began renting office space in our building. Some of our members have been involved in 350 Seattle activities, and we make sure to mention upcoming 350 events in our bulletins and newsletters," Prichard said. "In spring 2016, a number of our church members participated in the Break Free from Fossil Fuels effort that 350 put together in Anacortes, Wash., and just this past week, the partner of a church member was among those arrested at a 350-organized bank action to promote defunding pipelines. Members have a passion for creation and want to do what they can to be good stewards of the planet." 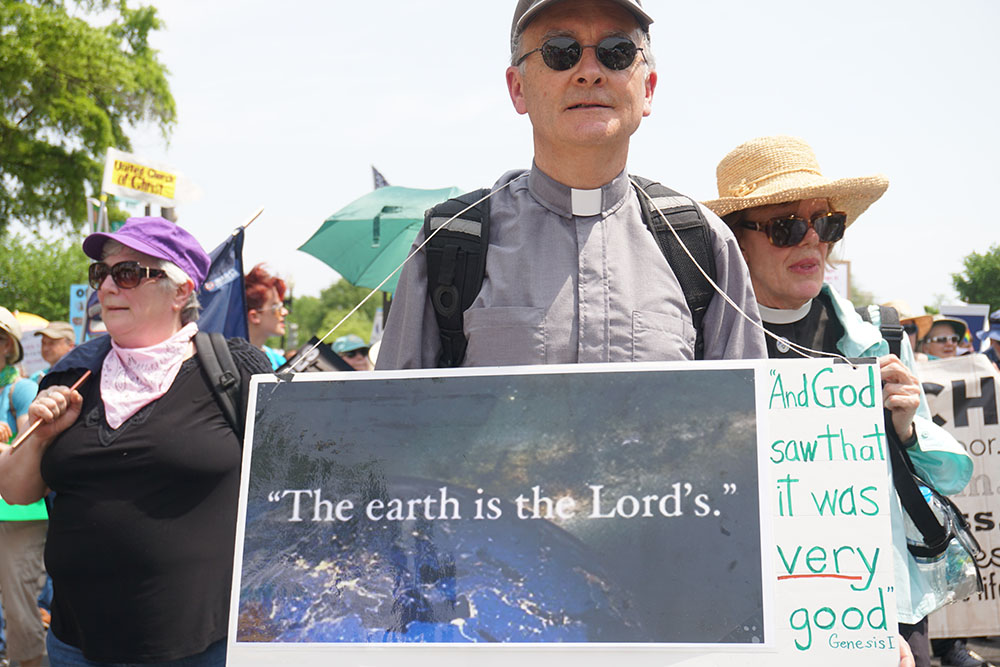 "The congregations of the UCC's Southern Conference are increasingly engaged in the work of climate justice," said the Rev. Karen Richardson Dunn, co-director of the Southern Conference Creation Justice Network. "Quite a few of our churches now have, or soon will have, solar panels. As well, both our clergy and laity are engaged in a statewide, interfaith campaign, 'Faith in Solar,' to invite Duke Energy to begin partnering with people of faith to provide solar panels for North Carolina's houses of worship that cannot afford them. This feels like a perfect time for our conference to begin collaboration with 350.org, to strengthen our resolve and activism in transitioning to renewables in North Carolina."

"In this critical moment, we at 350.org are excited about strengthening our relationship and building a bolder and stronger movement to preserve the Earth and our collective dignity," said Everette Thompson, 350.org national justice and equity coordinator. "From the beginning of 350.org, we have worked with UCC clergy on a national and local level. We are excited to formalize this partnership and harvest the fruit of our collective labor."

"It seems like a way to connect some dots between greening our own church and helping the greater community in our own small, but meaningful way," said Tom Hocking, a member of the Penn Central Conference Green Justice Team and of the UCC Council for Climate Justice. Hocking marched in the New York Climate March in 2014, and as a delegate to General Synod 31, he hopes to help "harness some of obvious faith-based energy and enthusiasm" seen at the latest march, saying, "It seems like the time is ripe to find ways to put the 'justice' in environmental justice."

People should contact Berndt if they want to be part of this initial pilot endeavor. "I want to know who is doing this and learn from their experiences as we consider ways to broaden and further this partnership," he said.

"All the ongoing attention to climate issues," Pritchard said, "especially with the risk that we may pull out of the Paris Climate Treaty, has certainly fired people up to get involved as never before."

"I think affiliating with 350 or working with an already existing affiliate is a logical next step for green teams that realize an enormous problem like climate change necessitates the building of a broad and active movement," Berndt continued. "The best way to be part of such vital work is to join an organization that is already doing it and has excelled at it."