A consistent commitment to sacred conversations on race, a congregational affirmation to find opportunities to learn more about the impact of racism and white privilege, and a ministry team whose goal is to create the space and the curriculum to make that happen are three good reasons why Old First Reformed UCC, in Philadelphia, has been selected for the 'Reject Racism' award in the UCC's monthly "Be the Church" contest.

"Old First will be delighted and honored when we announce this award," said Margaret Rohdy, one of the members of the Old First Sacred Conversations on Race (SCOR) team.  "The Sacred Conversation on Race has been part of our congregational life since 2014, before we even knew about it as a UCC program."

After Old First became focused on developing a deeper understanding of the origins of racism and white privilege and learning more about the impact of race and racism, members organized house meetings around sacred conversations on race in 2014, using the Questions for Individual Reflection in the UCC SCOR resource guide. The congregation invited several churches of the Philadelphia Association to be part of the conversation. In January 2015, the congregation passed a resolution affirming its commitment to the Sacred Conversations on Race at its annual meeting. This year, the SCOR team created a series of three workshops called 'White Privilege 101' to help those interested gain the tools to have substantive conversations with other people who might not be of the same mindset.

"We saw a need for learning and growing our knowledge of race and racism. Many wanted to know what they could do. The theme of 'equipping the saints' for action (Ephesians 4) emerged as a guiding principle," said Rohdy.  "White Privilege is a new concept for many of us, difficult for even right-thinking UCCers, maybe especially so."

The 90 minute monthly workshops, which have followed worship on Aug. 28 and Sept. 25, and will conclude on Oct. 30, have delved into the origins of racism in America, the economic costs of mass incarceration, and the idea of 'whiteness' and how to dismantle the privilege and oppression that comes with it.

"We created the 'White Privilege 101' workshop series because our team felt that we needed to create some intentional space to learn more deeply about the root causes of racial injustice and white privilege in our society," said Michael Johnson, one of the leaders of the SCOR team at Old First. "Our hope is that participants come away from "White Privilege 101" with the realization that although racism feels insurmountable, ubiquitous, and eternal, it can indeed be dismantled. By examining the past, we're giving folks tools to confront the present and change the future." 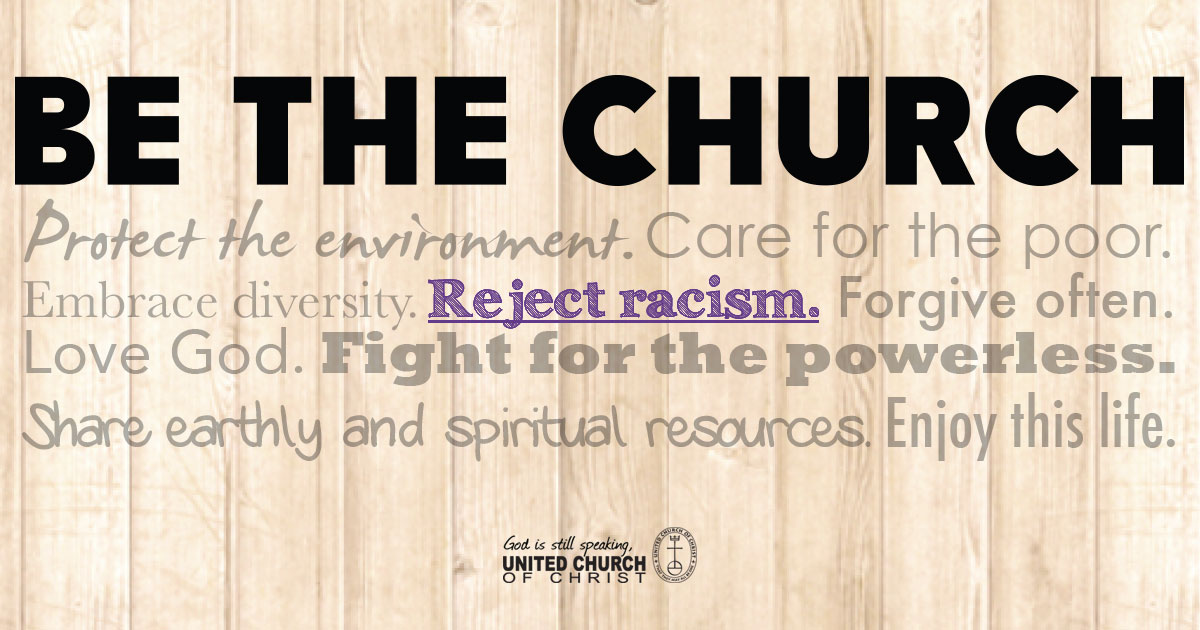 The nine-month "Be the Church of the Month" contest invites congregations across the UCC to send entries detailing how they are living out each of the nine values proclaimed on the denomination's "Be the Church" banner. The nine value statements reflect the UCC's mission of extravagant welcome. Each month, the contest focuses on a different statement, and encourages congregations to share –– in emailed text, photos and video –– what they are doing in their communities to put these statements into practice.

Old First administrator Teresa Warnick entered the September 'Be the Church' contest on behalf of the congregation and the SCOR team. "I admire what this church does and hope they feel affirmed by the attention, she said. "I don't think they realize how important the work is that they do."

"You honor us, and we are grateful, but more than that, we are encouraged to continue this work," said Rohdy. "We don't know what our next steps will be. We want to use the new UCC White Privilege: Let's Talk curriculum in some way. There is a lot of interest in the topic. Many have expressed a desire to learn how to respond when white privilege is apparent.  Also, we want to bring these issues more into our spiritual life. How can we bring a greater understanding of the sin of racism into what we are doing?  After all, we are a church."