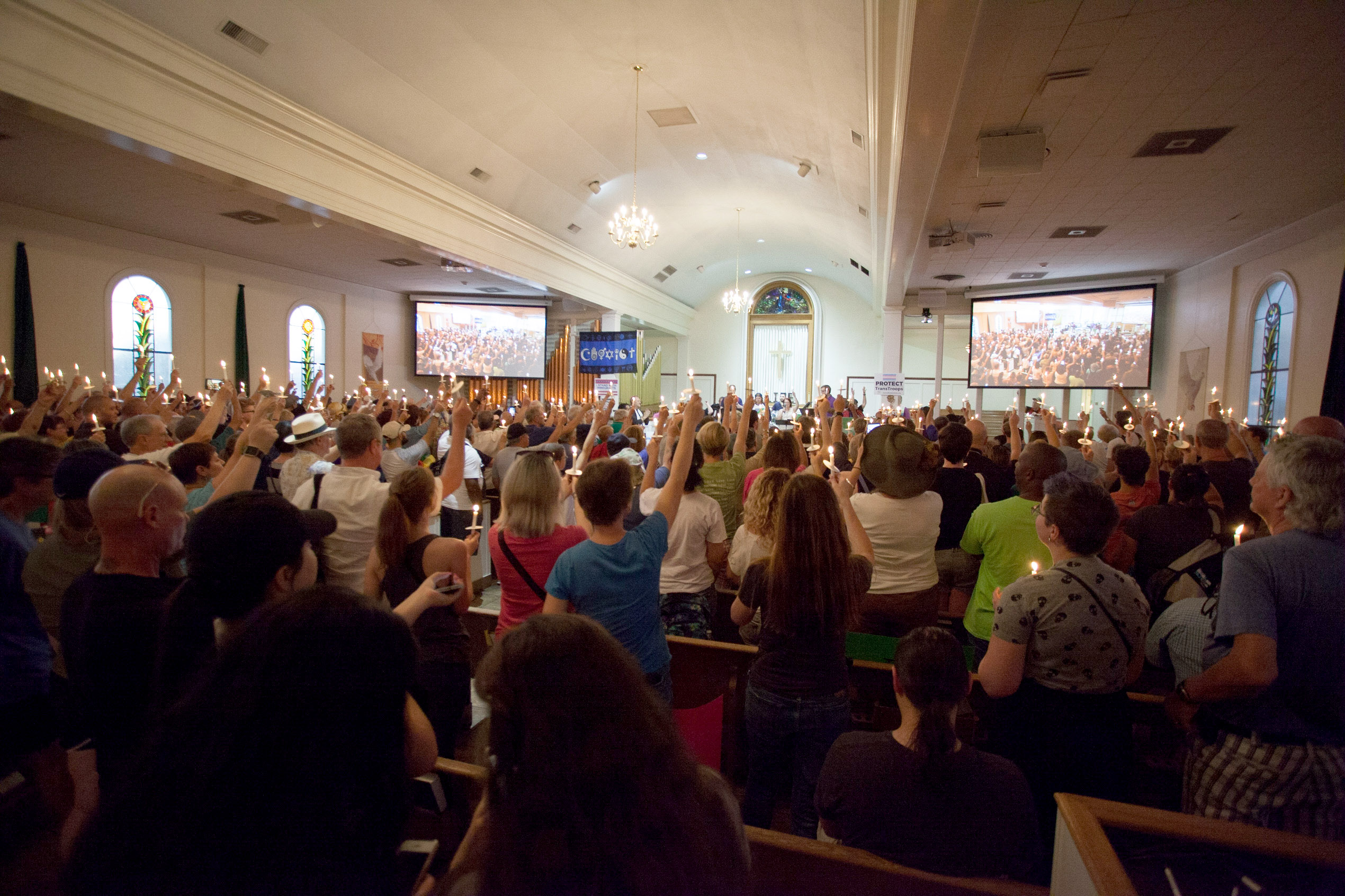 Hours of contrasting experiences for United Church of Christ clergy involved in an interfaith worship service and peaceful protest in Phoenix on Tuesday evening, with emotions changing from joy and hope to disappointment and grief.

A Unity Prayer Vigil and March, planned at First Church Congregational UCC, as a way of bearing witness to President Trump’s campaign-style rally at the Phoenix Convention Center, drew more than 600 people, with the crowd overflowing out the doors of the sanctuary and onto the sidewalks. The Rev. John Dorhauer, UCC general minister and president preached.

"The vigil at the church was just phenomenal," said the Rev. William Lyons, conference minister of the UCC Southwest Conference. "People were packed shoulder to shoulder in the pews and around the walls, with more people standing outside in the heat, listening to was going on inside. There was a Congressman from Tucson who spoke; John delivered a dynamically powerful rally speech. We had Jews and Muslims in attendance, one of the members of the Islamic community spoke. It was a beautiful time and it really communicated the love and hope we have for our country. Had the police not behaved the way they did, those would be the headlines."

The headlines, which point out that Phoenix police hit protestors with tear gas outside the Trump rally, don’t tell the whole story. According to UCC ministers, it started as a beautiful, albeit extremely hot, night. After worship the people of faith from First Church marched about a mile to a safe space close to the convention center, set up by Shadow Rock UCC in the courtyard outside St. Mary’s Basilica, where the churches were offering water, first aid and pastoral care. 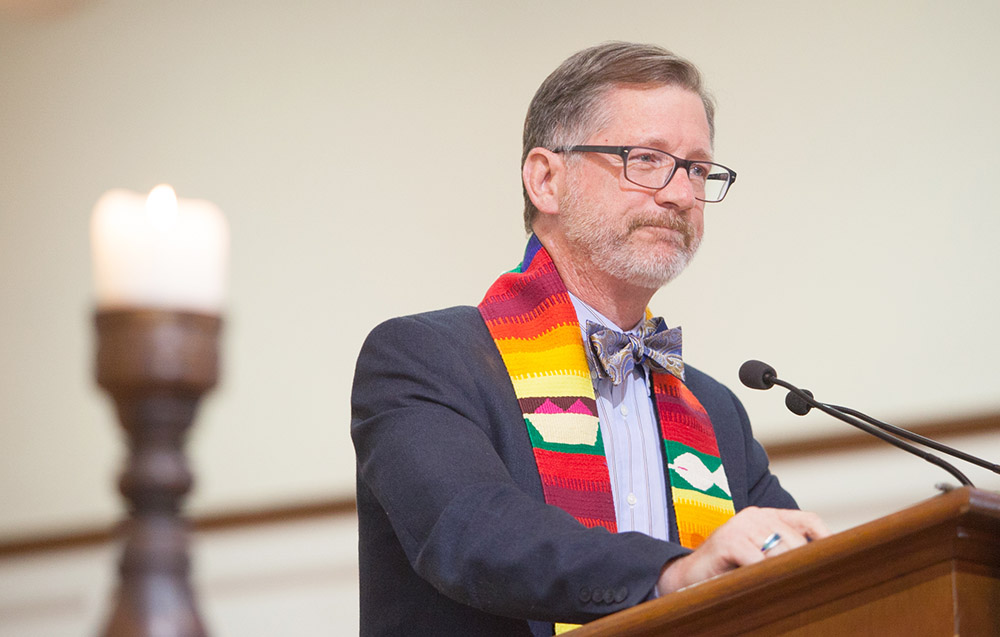 "It was a peaceful march with drivers honking in support and people on the streets cheering us on," said Dorhauer. "I was proud to be here among faith leaders calling for peace and justice."

The safe space, situated on the side of the park, was kind of quiet, a place for reflection, for conversation and prayer. A place for bearing witness.

"It was a really powerful night; I didn’t see many people in clergy collars in the crowd," said the Rev. Delle McCormick, pastor of Rincon UCC in Tucson. "Randy Mayer (pastor of Church of the Good Shepherd UCC, Sahuarita, Ariz.) and I walked through the crowds to get to the safe space set up by Shadow Rock UCC."

McCormick said despite the sweltering temperature of 111 degrees, it started off as a celebratory, festive gathering. People were chanting about acceptance, against hatred. That changed some as Trump spoke inside. For more than an hour, the president went after his critics and the media for the division of the country, and hinted at plans to pardon former Arizona Sheriff Joe Arpaio, convicted of contempt of court for ignoring an order to stop racial profiling of Latinos in immigration enforcement. The president also threatened to shut down the government if the border wall isn’t built.

"As soon as Trump started speaking, the tension rose," McCormick said, describing the mood of the people listening outside. "We got word that heavily armed types were coming through the crowd of protestors to the sanctuary site. The fire department water cannon arrived, and was set up facing into the protestors, and the riot police were coming out, dozens at a time, prepared to act, walking into the crowd."

The faith march, which was to continue to the State Capitol after a peaceful witness outside the center where the president was speaking, was cancelled. The crowd from First Church walked back in small groups when it appeared the situation was changing.

The Rev. James Pennington, pastor of First Church, was shepherding the crowd along, offering encouragement by loudspeaker.

"My role was to get people out of harms way," he said, noting that despite the change in plans, the faith group created some peaceful energy by being in community together.

"People were saying how powerful and profound the experience was — that it seemed to be a transformative, divine moment. I think that’s significant."

Lyons stayed back to bear witness. He said he wanted to see what the police were going to do when the crowd in front of him backed away from the barricades with their hands in the air, and shouted "peaceful protest."

"The police use of force was disproportionate to the threat of the crowd," said Lyons, who was standing near the steps of the Basilica watching it all unfold. "Basically as far as I can figure out what happened, two masked individuals threw water bottles at police lines. People in the crowd put their hands up, shouting peaceful protests, as the police lobbed tear gas and smoke grenades into the crowd."

Lyons got tear gassed. As he was talking to the pastor of St. Mary's, watching what was going on in the intersection, one of the smoke canisters ricocheted off the step a few feet away. He said the officers on the scene should have measured their use of force response based on the level of threat before them.

"I know the steps, as state prison chaplain (in Ohio) I had to learn ‘use of force’ training. You measure the response of force to the threat you face. A crowd standing up shouting peaceful protest does not call for you to continue to deploy chemical weapons."

"They could have stood down and allowed the peaceful protest to continue," Lyons continued. "It became very clear that their intention was to clear the streets; they didn’t want us there anymore."

Lyons, who initially couldn’t see and couldn’t breathe in the thick of the gas, got treatment from the medics in the sanctuary area. He said as he eventually walked back to First Church from the convention center, flash grenades continued to go off.

"It’s unfortunate that some protestors used tactics that obscure their message," Lyons said. "Without that the headlines would have read tens of thousands fill the street to peacefully protest the president."

"I think it is really important for church people, for clergy to hold the space for peace," said McCormick. "To not be a part of the crowd. To be that wise compassionate presence, that Jesus embodied sense that we are here, we are holding the space, we are here for peace and nonviolence, and we are not going away. With the specter of the cross we are not going away."

"This is a new reformation," she continued. "The church is calling out to its people to follow Jesus. Not to stay in the sanctuary, but to get out in the streets."