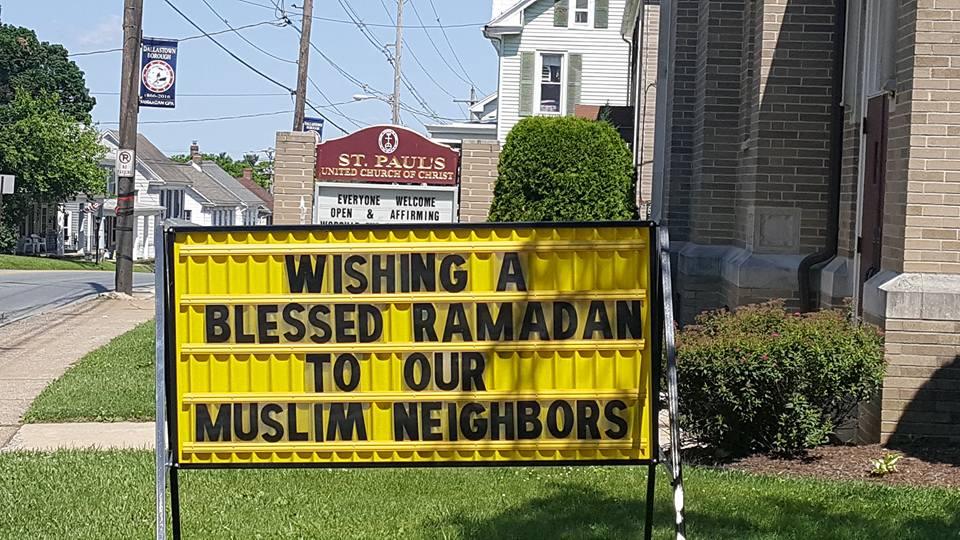 When St. Paul's United Church of Christ in Dallastown, Pa., used the sign on its front lawn to wish the Muslims in the community a blessed Ramadan, the Rev. Chris Rodkey never expected the aftermath to come. An angry phone call from a local official who was offended by the sign spurred more negative calls and social media comments – and even a physical threat to Rodkey – that left him surprised and disappointed. But regardless of the hateful responses, the church’s pastor stands by his decision to support the Muslims in his community and says he will continue to do so.

"When I put the sign up, I didn't think anything of it other than it being a thoughtful thing to do," Rodkey said. "My basic motivation remains the same: I want to show love to my Muslim neighbors, I want my Muslim neighbors and those of other faiths to see St. Paul's United Church of Christ in Dallastown to be a beacon of hope for this community, and in doing so I wish to give a voice to the voiceless and expose the political hypocrisy which oppresses our neighbors."

During the Islamic holy time of Ramadan, Rodkey changed the church sign to read, "Wishing a Blessed Ramadan to our Muslim Neighbors." The sign changes weekly based on happenings within the congregation, and was changed the following Monday to promote a free community dinner.

"The sign wishing a blessed Ramadan to our neighbors was up before the homophobic terrorism in Orlando, and it did not come down as a response," said Rodkey. "The sign now is announcing that we're having an outdoor worship service and potluck this Sunday at a local community park. Next week it will be something different."

Despite the negativity, Rodkey said he has been touched by the number of non-Christians, especially Muslims, who have reached out to him. He adds that it is this kind of "hateful, backwards-looking" behavior that causes people to turn away from the church, and he hopes St. Paul's actions can instead send a message of love, acceptance and inclusivity. The caller who initiated the backlash has since apologized for his words and actions, and Rodkey has decided to "practice forgiveness and move on."

"As this story exploded online, which surprised me, the calls and messages turned from hateful to overwhelmingly positive," Rodkey said. "The number of Muslims who have invited me to their communities and luncheon groups is really touching, and the blessings they have pronounced on me, my family, and the St. Paul's congregation has been really awesome. Someone even sent me flowers just out of nowhere with a message thanking me for speaking up for the rights of Muslims."