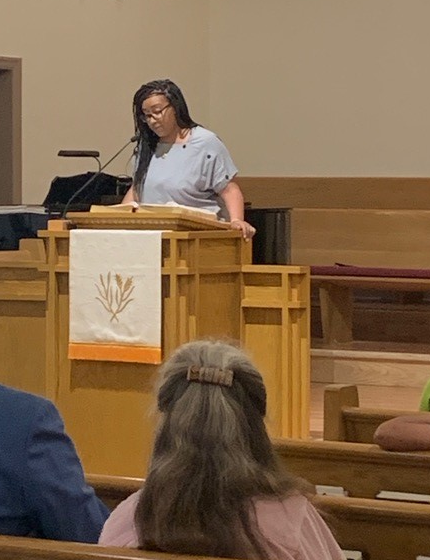 It's a simple concept — enable people living in poverty to overcome the barriers and the issues that keep them in poverty. A rural congregation in West Milton, Pa., is successfully applying this idea in a 16-week program called "Circles of Love" offered to its neighbors in need. The concept is changing lives.

"I knew that I needed a change and this was God opening up a door for me. I needed to break generational cycles. Being part of Circles of Love motivated me, encouraged me, taught me how to get ahead in life and stay ahead. They gave me the tools. When I was finished with my program I had a job, a rising credit score — I even stepped out on faith and started my own cleaning business."

Jones is one of seven women who completed this year's class on Thursday, May 16. (Eight graduated in the program's first cohort in 2018.) But she's not finished with the people Circles of Love brought into her life.

"I gained a family in the process," Jones said. "They gave me a fresh start so I can be a better woman and mother. It all started with love and changed my life. My hope for this program is that it reaches all over the world into different churches, communities and schools. So others can get ahead."

"It's my passion to see the Holy Spirit moving in community and us being the church," said the church pastor, Timothy Hogan-Palazzo. "I learned some time ago when people bring ideas to you as a pastor that you listen and encourage."

Hogan-Palazzo was brought the idea, based on principles from Getting Ahead: Bridges Out of Poverty, by a new member who was trained as a facilitator. Rose Williams wanted to provide her neighbors an opportunity to break the cycle of generational poverty by offering resources for people to help themselves get ahead and ways to build strong positive relationships.

"I am a firm believer in 'building a longer table,'" Williams said. "I believe it starts with a conscious decision to reach out to people in need and trying to get to know them, so they might join our table of friends."

In 2017, Saint Paul's pastor put the program outline before the church consistory and the congregation and got full support. He would raise the money to launch Circles of Love while Williams worked on the creating the ministry. Volunteers began to clean and paint rooms in the church that hadn't been used in years.

"Funding just came," Hogan-Palazzo said. "We received a grant from our [Penn Central] Conference, some assistance from our Association, and several small gifts from the congregation." Neighbors in West Milton came through too. He offers this example. "I was having dinner at a restaurant in town with my family, and a man in the community approached me, laid an envelope on the table and said, 'this is for the program you are trying to start.' I didn't know him well. But he gave me $500. Now he and his wife and his six kids are coming to our church."

Saint Paul's raised 25 percent of its then annual budget to birth this new ministry as members of the congregation, other churches and the wider community got involved as volunteers, allies and co-facilitators.

"I have volunteered for the program helping with child care for the past two sessions," said DeAnn Hansum, who attends Saint Paul's. "I am married, in a stable home and financially comfortable, but it was not always this way for me. I have also been a single mom living paycheck to paycheck, having no money for life's emergencies. It's so uncomfortable and often scary. No mom should have to feel that way when trying to do the best for her kids."

This belief in building community through love and empowerment has also enabled Saint Paul's United Church of Christ grow exponentially. About 15 souls attended worship when Hogan-Palazzo was called to The church. Attendance grew to about 40 each week at the time Circles of Love launched. Now Hogan-Palazzo leads a Sunday service with 90 to 100 people 2 ½ years later. 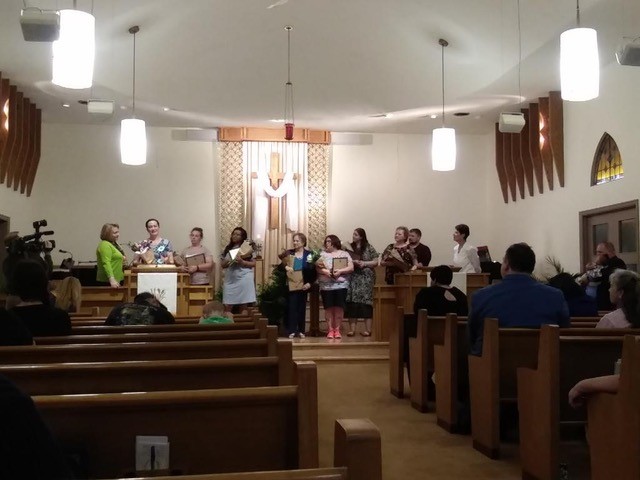 Their recent Circles of Love graduating class is preparing to enter into "a second semester" focusing on financial literacy at a local credit union, "which came from someone just hearing about the program and saying, 'I think that's something we want to partner with you on,'" Hogan-Palazzo said. "So for the next six months the group will meet monthly (with their allies) and they will talk household finance, budgets, planning, saving, borrowing, credit scores. At the end of the class, each will be given a tablet to take home and use to help them manage their finances."

The West Milton congregation is now getting referrals from those completing the program, community members and local advocates.

"Lifting families out of poverty means teaching them how to wisely manage their limited resources and to surround them with allies and a community that cares," said the Rev. Monica Dawkins-Smith, former Penn Central Conference Minister. "I'm thankful for the vision and courage of a small congregation like Saint Paul's UCC to partner with various community groups to provide resources like fresh food and education that empowers families to break free from the cycle of poverty."

"I am just giving back, in a small way, as thanks for the abundance God had ultimately planned for me," Hansum said. "My hope for these moms is they can envision a brighter future, and make it happen. Evidenced by the program graduates, it IS happening!"

"Volunteers get much more than they give, the contributions are far exceeded by the relationships built with fellow volunteers and participants alike," Williams said. "Circles of Love has brought together many congregants into close fellowship. It is a familial, Christian bond."

"There are amazing stories coming out of these groups and as an added bonus we now get to call these folks, the participants, family," said Hogan-Palazzo. "While most are unchurched, some have discovered our community of faith or other communities of faith in the area as they seek to build strong healthy relationships."

"I encourage other church families to take a step of faith and hope, shifting efforts from enabling to empowering people," Williams said. "Look at how to help provide needed resources; the most important resource is relationships of mutual respect."