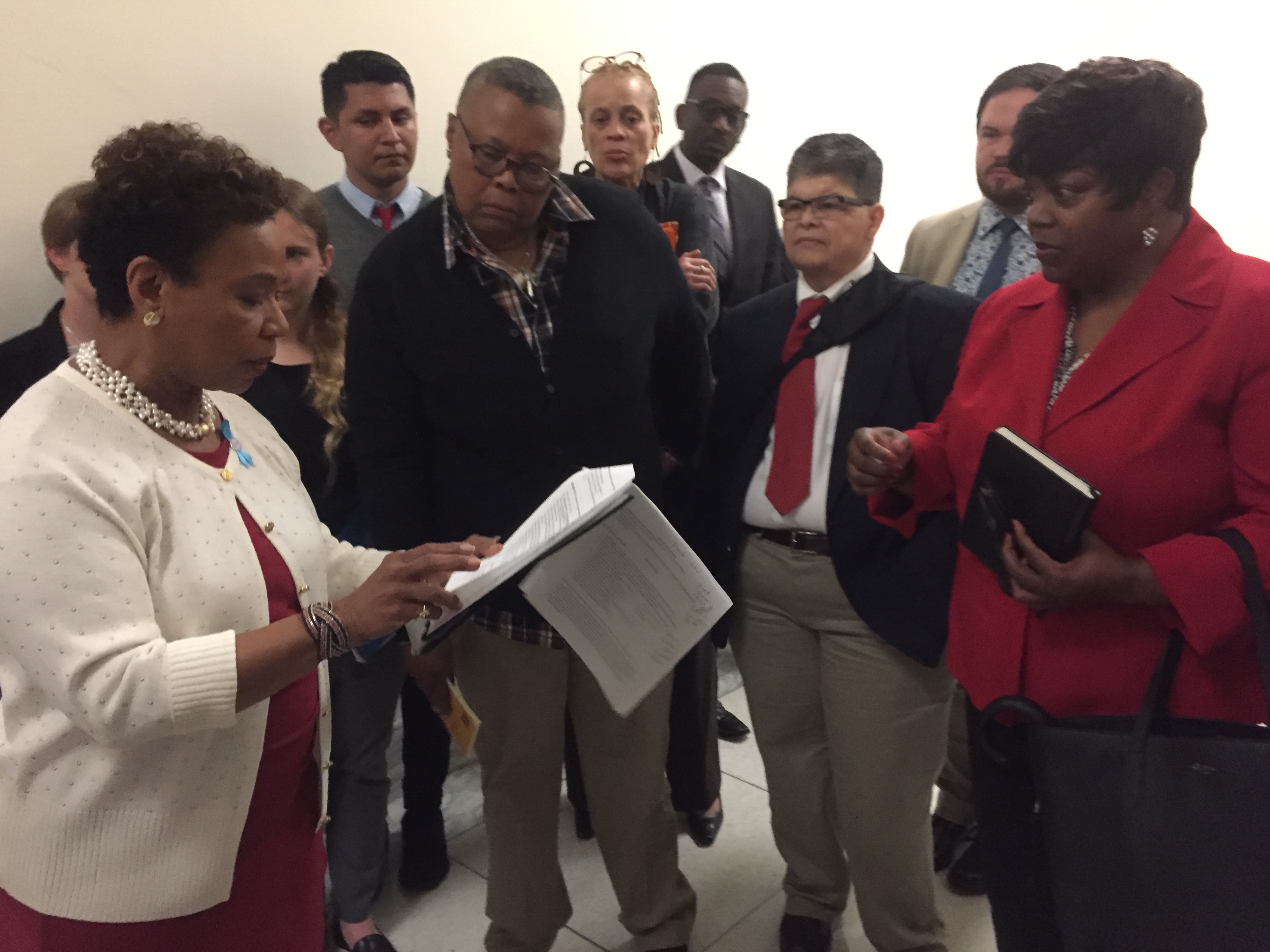 Classes may have concluded for the semester at Pacific School of Religion, but applying knowledge is far from over for more than a dozen seminarians and recent graduates, now in Washington, D.C., learning how to put their faith in action.

Through the end of May, 16 students from Pacific School of Religion — a handful of whom recently graduated last Sunday — are on Capitol Hill for 10 days to study with multi-racial, multi-cultural and multi-faith organizations about how and why religious leaders engage in public policy advocacy. The United Church of Christ's D.C. office, with the help of inter-religious partners in the nation's capital, is equipping these students to articulate their life's stories — and the stories of real people affected by Congress' decisions— to lawmakers, and to work for more just public policies.

Tara Hamilton, a third-year seminarian from South Carolina, discovered that she enjoyed advocating on Capitol Hill. "You see politicians and their staff as practical and as real people. It's de-mystified," she said. "And I realized we could make some change, and that I like it and don't feel afraid to do it anymore. I feel more confident speaking with conservatives and liberals."

Hamilton grew up Southern Baptist before joining the UCC. "Now I'm getting a chance to see a refreshing social activism from a progressive point of view, but I can use my conservative upbringing while speaking with staff from the office of Senator Mike Lee (R-Utah)," she said.

"The primary goal of the immersion is to help students understand that engagement in the public sphere and public policy from a faith perspective is part and parcel of their Christian vocation," said Sandy Sorensen, director of the UCC's policy advocacy office in Washington, D.C. "We're trying to help them see how it may be part of their call to ministry, in whatever contexts they minister, in the sense that advocacy, at its heart, is about telling the stories of those most impacted by public policy."

Sorensen's staff was contacted by the seminary months ago about putting together an immersion program for the students. So her office, located in the United Methodist Building in the shadow of the Capitol, worked with partners to set up a 10-day program that covers topics from immigration, environmental justice, criminal justice, and health care, to international issues such as defense spending with perspectives from Washington's interreligious and nonprofit community.

"Equipping and empowering people for public policy advocacy is at the heart of the D.C. office's function, and it goes hand in hand with the work and witness that we carry out on Capitol Hill and beyond," Sorensen said.

There are meetings with the National Council of Churches and the Human Rights Campaign, visits to the offices of members of Congress, stops at local churches to learn about their witness, and learning about how church and state intersect.

"Thinking about how religion and faith connect with the world is an important question, and this trip is helping me cement those connections," said third-year seminarian Michele Chun, from Oakland, Calif. "Sometimes the policy questions are a little harder to wrap my head around, but I'm seeing how public policy shapes the lives we live and how we see the world."

Sorensen said the most important lesson she and her staff are attempting to convey during the program is recognizing the power of their voice, and the collective power of engaging policy issues among a community of committed justice-seekers.

"As difficult as the work may seem, there really are ways in which they can make a difference, and that's what they are seeing through the course of the briefings they are receiving, and the places where their voice has an impact," she said. "Advocacy is really about sharing a personal story. Hopefully they will go back home, and empower others to do the same."