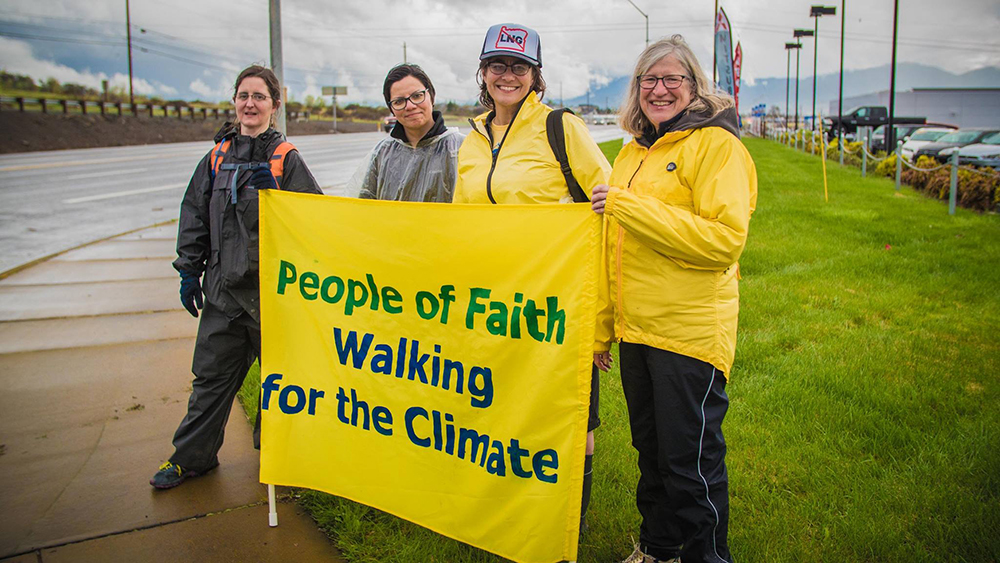 During the week of the Christian calendar that proclaims resurrection and life, 13 people of faith were on the move for climate justice, building community along the way.

This group in Oregon spent the time from Palm Sunday to Easter on a 235-mile journey, an ecumenical quest for Mother Earth, walking and biking from Medford to Salem in a witness that supports putting a price on climate pollution. The walk concluded with a vigil on the steps of the State Capitol building at 10 a.m., Monday, March 28.

United Church of Christ minister the Rev. Paula Sohl, from Ashland, Ore., led the Climate Action Network (of the Central Pacific Conference of the UCC) in its "Walk for the Climate," which is modeled on the caminata, a walk often practiced in Latin America that demonstrates and mobilizes resistance to injustice.

"A caminata is a symbolic action — a journey involving bodies on the move for justice," Sohl said. "In Holy Week, we journey with Jesus to the cross, and death does not have the last word. In Latin American caminatas, step by step, with songs, chants, and conversations, people walk as defenders of nature and life, denouncing injustices and corruption, demanding respect for life and dignity of the people, fighting against concessions of territory and demanding the land for the workers. This is our struggle as well as we defend the planet against carbon pollution."

The journey was also a celebration of the federal government's denial two weeks ago of a permit for a natural gas pipeline and a liquefied natural gas terminal in Southern Oregon. But the group traveled with a new goal of asking state governor Kate Brown to reject export liquefied natural gas facilities in Oregon once and for all. 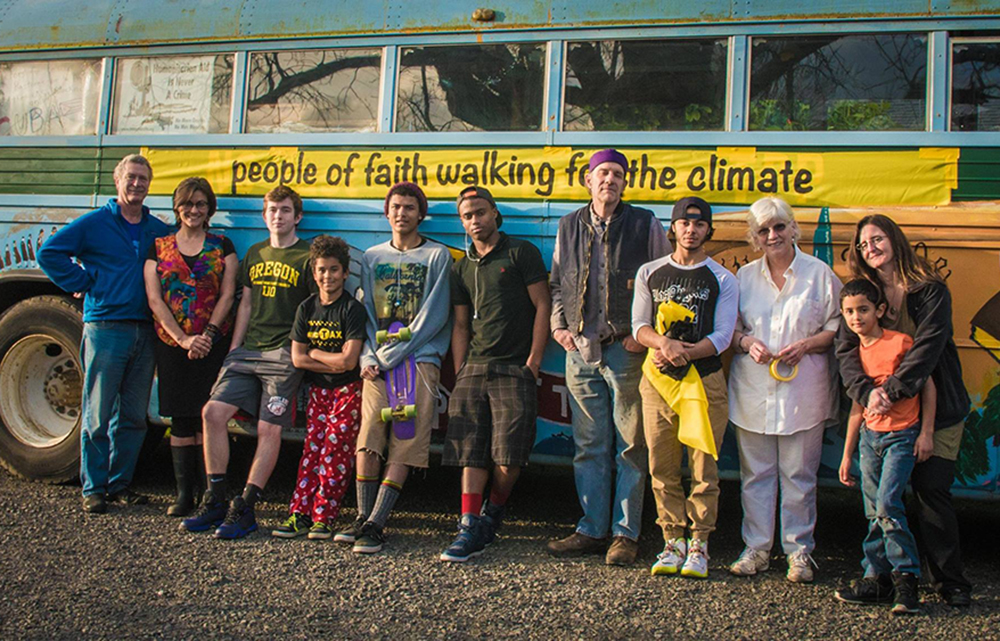 "The impacts of such projects do not outweigh the harm and risk to the environment and landowners, and our path to a healthy economy and new jobs lies in investing instead in clean energy development," Sohl said.

The 235-mile route is no accident. The distance from Medford to the state capitol represented the length of the proposed pipeline.

High school senior Miyk Moore was one of six young people on the trip. He participated to fulfill his school's community service requirement. "I was a little reluctant at first, but it turned out to be really fun," said Moore. "It's been a long trip, but there are a lot of bonds that have been created. We talked about it in my government class … why we're walking and what we'll say to the governor."

Before departing on the journey on March 20, the group of walkers and bikers received a Palm Sunday send-off at Medford United Church of Christ during the morning worship service.

Along the way to Salem, the group stopped in Shady Cove, Milo, Roseburg, Cottage Grove, Eugene and Corvallis, where they shared in evenings of music, poetry, education, and Holy Week events of the hosting community. With each visit, the caminata attracted more attention as locals joined for part of the walk. "We thought that would be the way it would turn out," Sohl said, "that we would gather more interest the farther we went."

Though the governor did not meet with the marchers, their message reached the citizens of Oregon along the route.

"Oregon's legislature enacted goals to reduce carbon pollution nearly a decade ago," said Sohl. "Now we need to enforce those limits. We [went] to Salem to express to the governor our commitment, as people of faith, to the sacredness of creation and the need for the State of Oregon to get behind the movement to lower greenhouse gas emissions through carbon pricing. Doing so would place Oregon among the leaders in the world for smart climate policy, and lead to a clean energy job-creating boon for our economy."