A community of more than a dozen people with no place else to live has established a camp on the property of a UCC church in Corvallis, Ore. So, First Congregational United Church of Christ has started a "Safe Camp" ministry to host and support them.

It wasn't as simple as it sounds. The church has spent months working with Benton County and the city of Corvallis to find the best ways to support this group experiencing what the Rev. Jennifer Butler calls "houselessness."

"Houselessness — because home is not necessarily four walls and a roof. That is not even a historically or culturally apt description of home, but we tend to diminish the word 'home' to mean 'house' in a way that is problematic," the pastor of First Congregational said. "Just as true, a person may be 'housed' and not feel that they are 'home.' A tent can indeed be a home, and in fact, many are. Not just in the U.S. but in other places around the world where folks still live in tents or yurts or similar spaces. We are trying to work against reductionism by using 'houselessness' rather than 'homelessness.'"

People have camped there for years 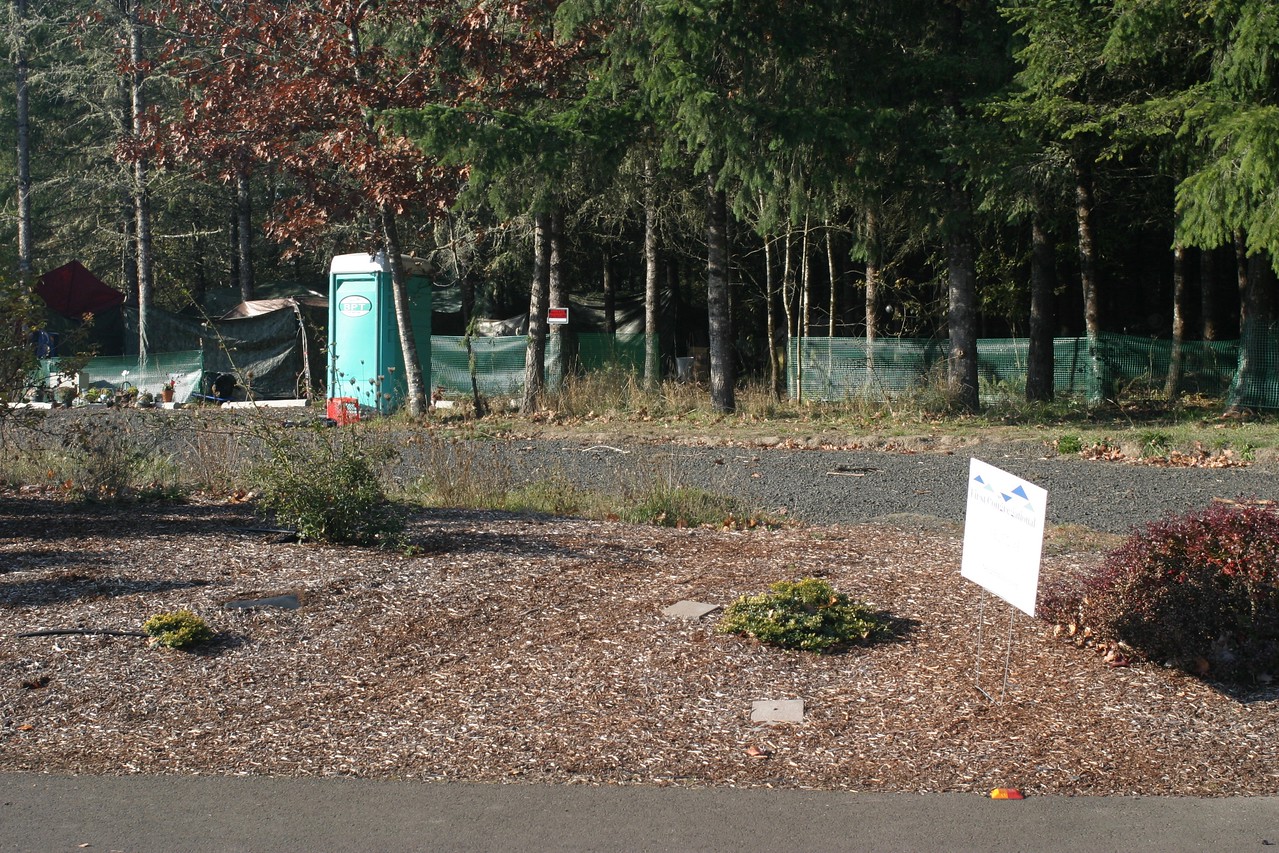 Butler and members of her First Congregational have long been aware of the houseless in their community. The pastor said there have been people camping in the woods adjacent to church property for more than 20 years. The lack of affordable housing is an increasing problem in the Pacific Northwest, with states of emergency declared in several areas in Washington and Oregon as well as cities in California. According to the Corvallis Advocate, the rate of houselessness in Oregon is more than double the national average, affecting 35 out of every 10,000 people.

Last year, Butler said the church put a port-a-potty and dumpster in parking lot and has not discouraged campers from accessing water from its outdoor faucets or electricity at its front entrance. First Congregational ministry teams also began to interact with county social service agencies to think about ways to "interact responsibly with the camping population."

Robin Frojen, a member of the congregation and now part of the Safe Camp management team, said she felt called to participate. "One Sunday in late June, Jen made an announcement that a houselessness ministry team was going to meet and if anyone wanted to join the team they were welcome to come. I felt a physical push to get up and go to that meeting. Not long after, 23 people showed up on our property to be safe. I took on an instrumental role in caring for them —15 to 20 hours a week on top of my full-time job at the university." 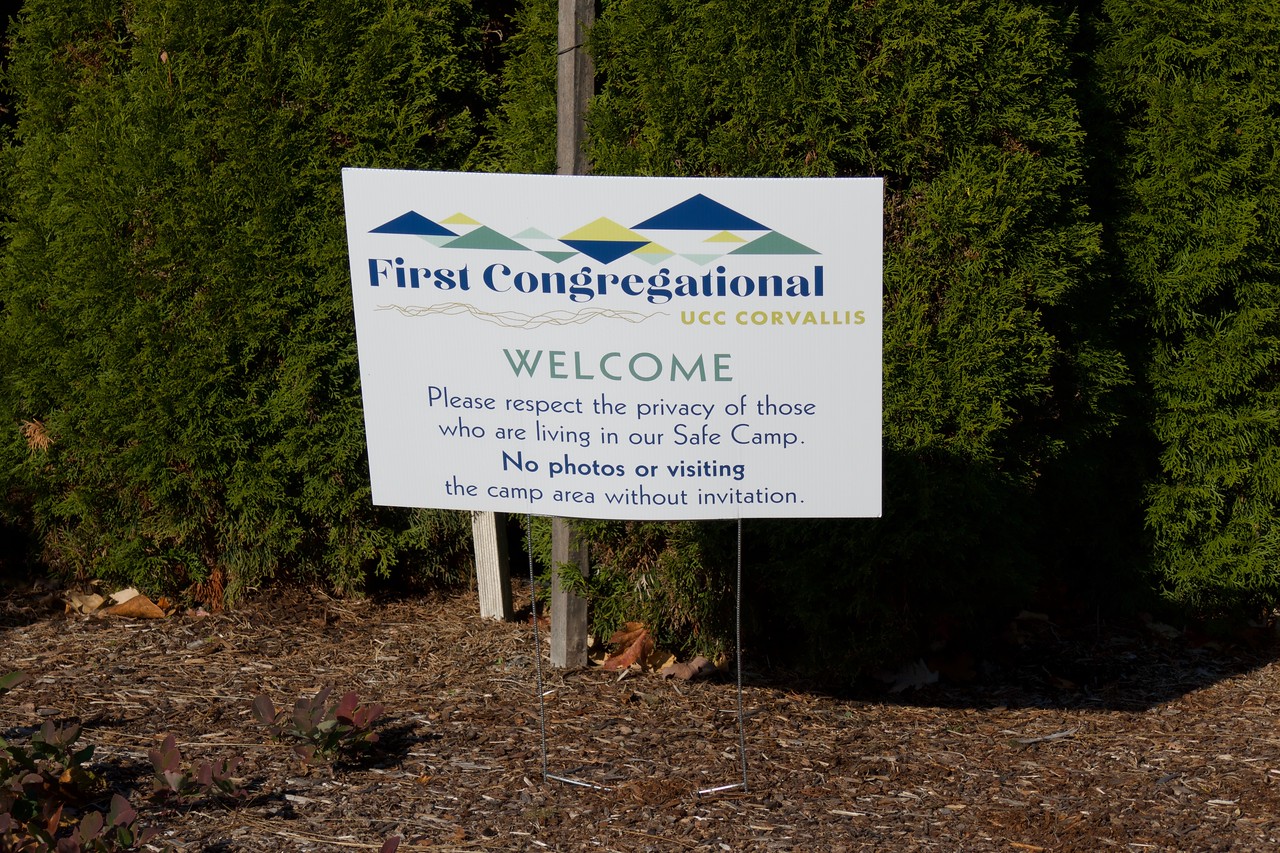 The incident to which Frojen refers — where 23 people came to the church seeking safe shelter — took place in July, after a camper was arrested for trespassing in front of the church after hours.

"After we become aware that law enforcement activity had increased on our property and the larger adjacent field to remove the campers, we let officers know that we do not consider people on our property to be trespassing," Butler said. "We cannot ignore Jesus' mandate to welcome the stranger."

But law enforcement actions continued. A few days after the first incident, one of the campers who Butler said was frightened by the intimidating presence of the officers, called the pastor in the middle of the night.

First Congregational responded by marking off its property line, and church leadership reached out to government officials, social service organizations and community partners to "react faithfully on a temporary and transitional basis to a crisis of safe shelter," Butler said. "The campsite was capped at a particular number and behavioral contracts were created. A plan to walk through the camp every night and establish a curfew was made and carried out."

That is when Safe Camp was formally established on the church's land – on July 17, with those 23 individuals seeking shelter. Ginny Lucker, a land use attorney who attends First Congregational, became a member of a community steering committee that was created to work on the issue. 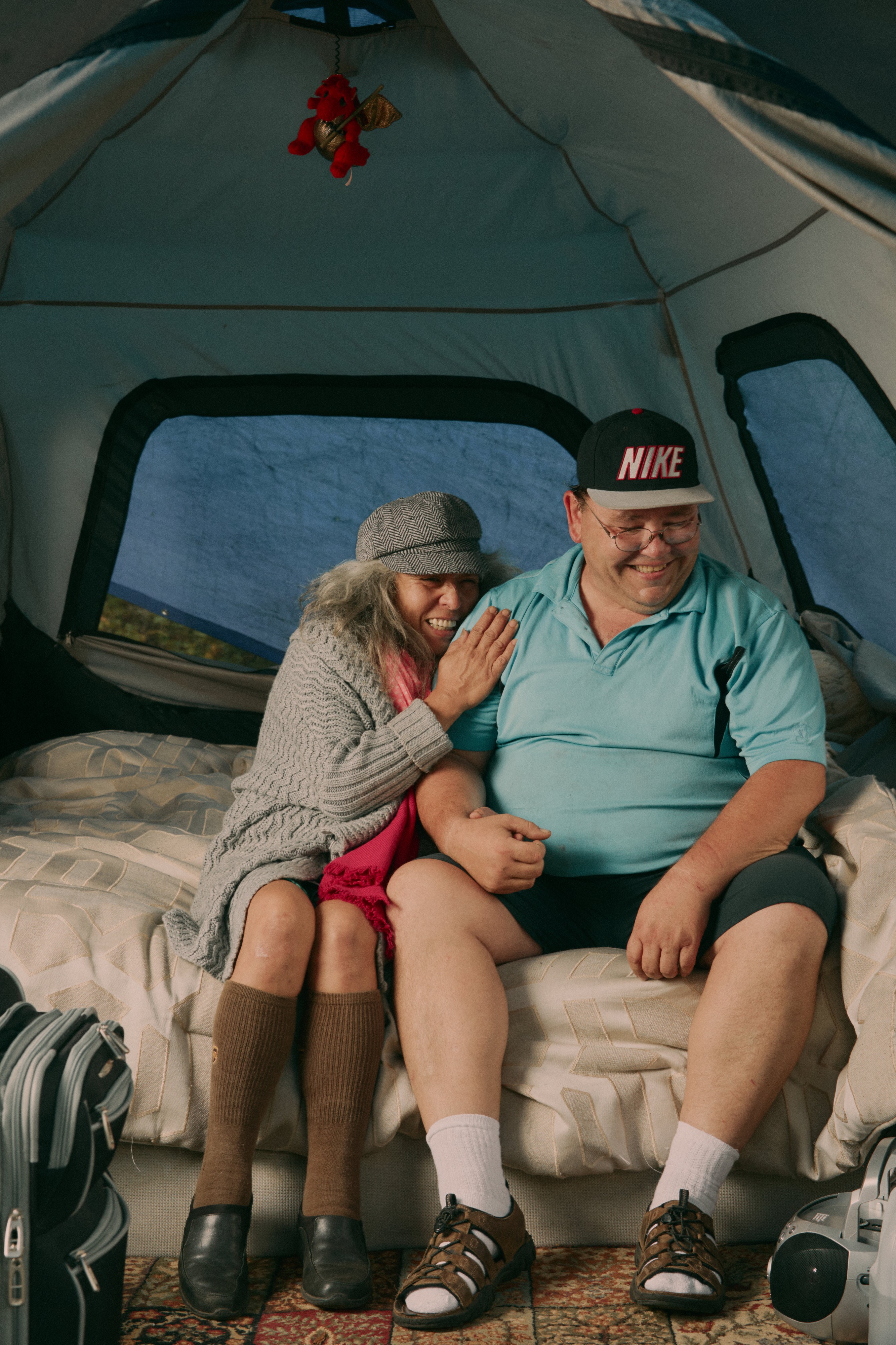 "My reasoning for becoming involved in finding solutions to a growing homelessness crisis — and specifically for becoming involved with the Safe Camp on our church property — is pretty straightforward," Lucker said. "I have a professional skill set that is useful and needed and I have a moral imperative to use my gifts and skills in a way that can help. I did not seek out this opportunity. I don't have a background and history of activism on this particular issue. I do, however, have expertise in Oregon land use law, which has been the focus of my career for the last 30-plus years. And I believe that what we are doing in providing shelter and stability for a marginalized and vulnerable community is critically important and essential to our mission as a faith community."

In late July, as the camp held its first required community meeting to go over agreed-upon behavior and fire safety rules, the church reached out to its housed neighbors about Safe Camp.

Some neighbors were pretty angry, Butler said. First Congregational held a listening session to hear the concerns of the neighborhood. The church, which was not in violation of any land use, zoning or criminal laws and did not plan to interfere in necessary interaction with law enforcement, wanted to make what members saw as their moral responsibility very clear.

First Congregational then was drawn into a series of government meetings and community discussions. Benton County gave the church 90 days to operate Safe Camp, with an Oct. 23 deadline to come up with a process to authorize the continued use of the site as transitional housing.

Law and memorandums may help 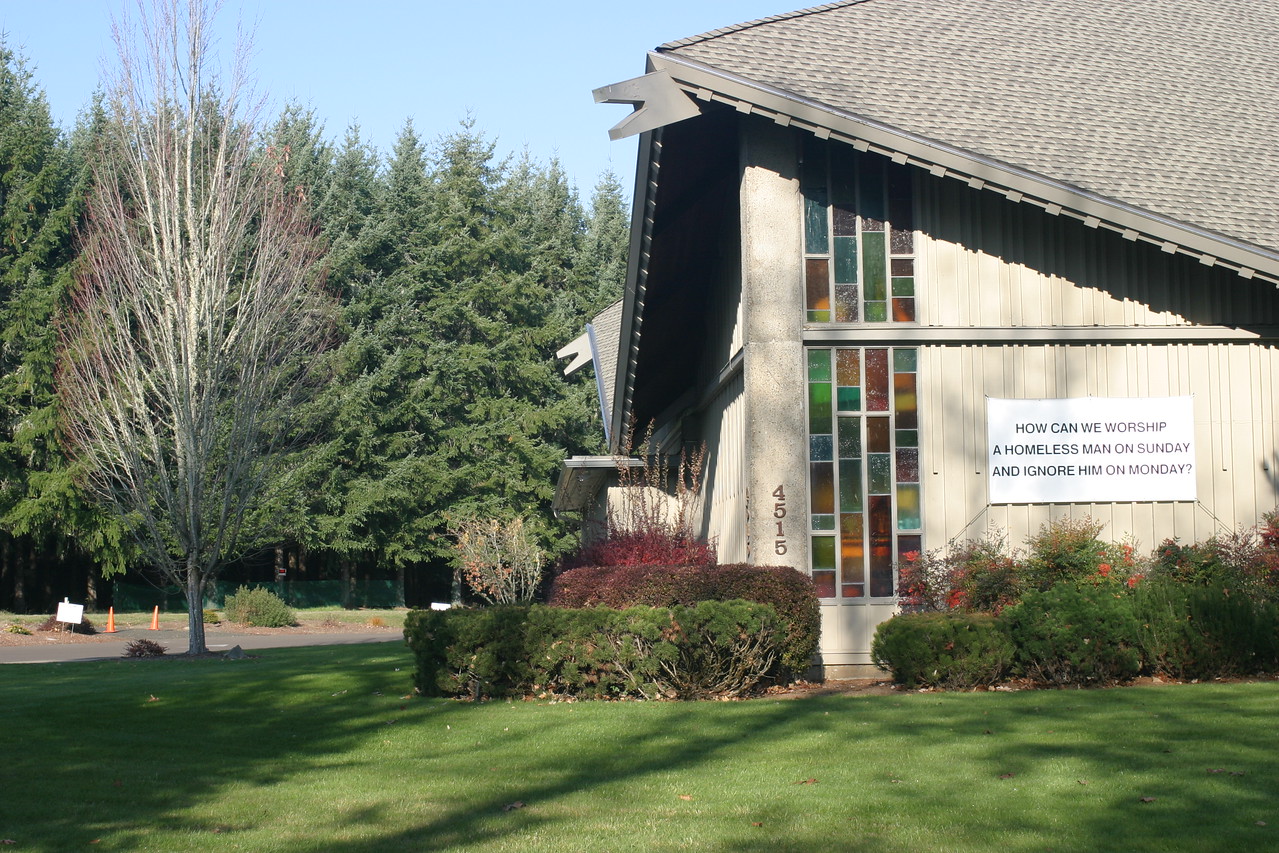 Butler said the church has done two things in response. It is working ecumenically with other congregations in the area to put together a broad framework of faith-based organizations that can help. And it is talking with Corvallis and Benton County about creating a memorandum of understanding around the Religious Land Use and Institutionalized Persons Act (RLUIPA). The federal law, passed in 2000, protects individuals, houses of worship, and other religious institutions from discrimination in zoning and landmarking laws.

"Under RLUIPA, local governments cannot make it difficult on a religious organization to do its ministry on property it owns and cannot ask congregations to apply for a use permit or abide by zoning restrictions to do ministry," Butler said. "We do have to pay attention to health and safety laws."

A precedent exists in Seattle, where congregations and religious organizations have used RLUIPA to create memorandums of understanding with local governments.

In Corvallis, "both city and county seem poised to really engage this issue," Butler said. "Safe Camp feels like the kind of push that was needed to act as a catalyst."

On Oct 17, the director of the Benton County Community Development department announced that a staff team was drafting an ordinance. If adopted, it would enable the County to authorize transitional housing sites that could include a variety of housing types (tents, yurts and cabins, for example) and would be subject to standards to be specified in the ordinance. "Given the above," director Greg Verrett said, "the County will not require the church's camping site to cease, unless and until there is an absence of a viable path to legalization that is being diligently pursued." 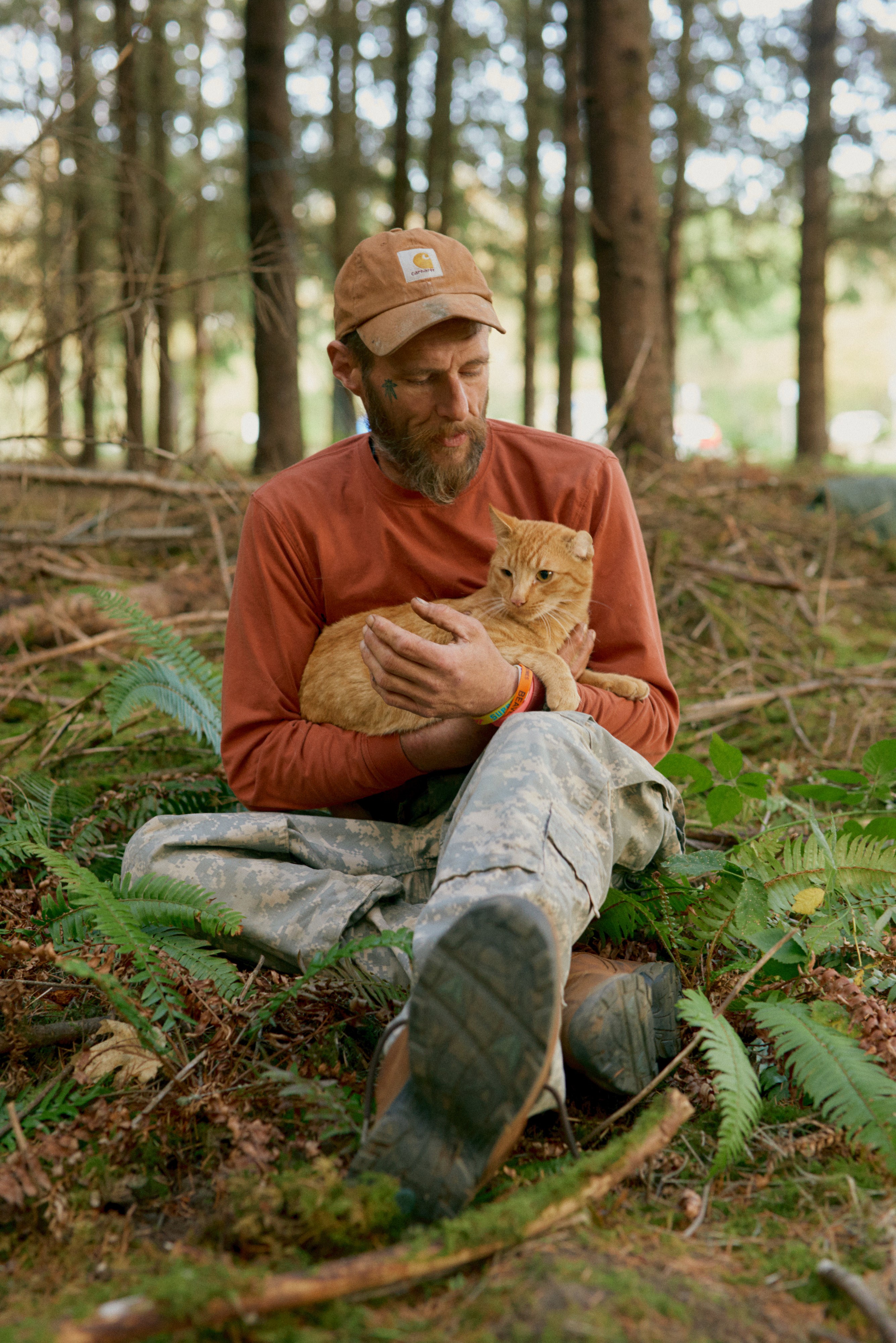 Some of the UCC congregation's ecumenical partners are willing to offer shelter to other houseless people in Corvallis by setting up sleeping units on their property. As winter approaches, seven micro-shelters have been paid for, and the churches are starting to think about ways to heat them.

"I am very proud of my church's commitment to Safe Camp," said Aleita Hass-Holcombe, a First Congregational member who is the volunteer director of the Corvallis Daytime Drop-in Center. "I am currently very hopeful that the seeds we have planted will soon result in many viable options for our community. As more Corvallis faith groups and individuals are joining together to creatively expand the options for housing everyone in our community, I will continue to advocate and be part of the solution."

"We all have different gifts and skills, and I believe that the divine in each of us calls us to use our skills and gifts as only we can," Lucker said. I can't do what Jen, Aleita or Robin are doing — they are all absolutely amazing and I am in awe of them and so grateful to each of them for their leadership, compassion and commitment. What I can do is 'speak land use' and help provide some guidance through whatever regulatory or legal process confronts us as we do this work."

"The whole congregation seems to have galvanized around this," Butler said, noting that the situation has brought "clarity about what it means to be a church in the world today and answered questions about relevancy."

"They are so clear that this is their fundamental duty as Christians," she continued. "We are responding to a situation we did not invite but which landed on our doorstep. The church has made no decision to establish permanency nor shut it down. This is a temporary and transitional response to the systemic problems of houselessness in Corvallis and Benton County."

"I have really begun to feel like I found my calling," Frojen said. "The more time I spend with our residents, the more I realized this is what I'm supposed to be doing. This so far has been one of the most transformative events for me and my faith journey."