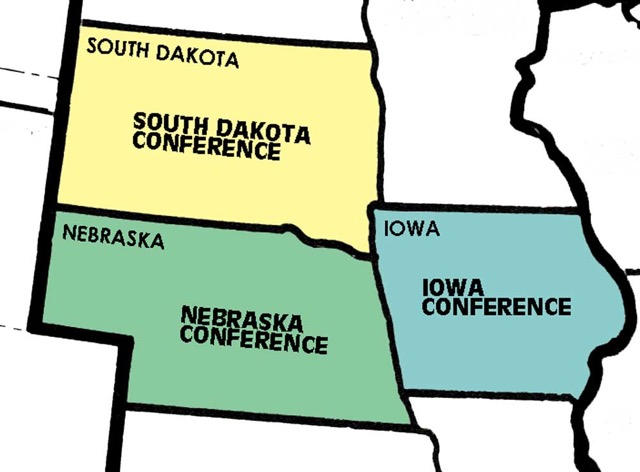 Three United Church of Christ conferences in America's heartland are talking collaboration, voting on a proposal to create one staff to serve three conferences. So far, the Tri-Conference One Staff Model has passed in South Dakota, nearly unanimously, on June 4, and passed in Nebraska on June 11. The final vote comes in Iowa in the fall.

"Roddy Dunkerson (Nebraska Conference Minister) and I began talking about the inefficiencies of the current system quite a long time ago," said the Rev. Rich Pleva, Conference Minister of the United Church of Christ in Iowa. "Then General Synod in 2013 passed a resolution inviting conferences to study – and potentially rework - their 'boundaries.' A careful reading of the resolution and its rationale seems to indicate that it's less about 'boundaries' than it is about the overall structure of the middle level of the church."

Pleva, who's served in Iowa for 11 years and the Rev. Roddy Dunkerson, who has lead the Nebraska Conference for 12 years, seized the idea as a moment of opportunity. With both of them approaching retirement, it's time to think about trying something new. When South Dakota joined the conversation, the group's joint task force drafted a proposal to create one integrated staff to serve all three conferences.

The Rev. Gordon Rankin, the newest member of the group, as South Dakota Conference Minister for 10 months, likes the proposal for several reasons.

"The first goes all the way back to one of the founding documents of the UCC:  The Basis of Union (1943)," said Rankin.  "It says that we as a church will continue seeking further union and to that end we will 'live and labor and, if need be, die'. The good news is we have no out-and-out deaths in our One Staff Model. But that is not to say there won't be a sense of loss. A conference's identity becomes intertwined with who and how their staff is. For our conferences, giving up employing their own staff in favor of co-employing a shared staff will likely come with a sense of loss. However, there is a lot more to that statement for the Basis of Union. The Tri-Conference One Staff Model is doing a new thing, yes, but it is doing it in a way that is a fulfillment of who we've long said we are.  From before the UCC was the UCC, we said we would give everything to move towards more collaborative, more unifying forms of ministry.  What the South Dakota, Nebraska and (hopefully) Iowa Conferences are doing is trying to live that commitment out on a conference level."

Rankin and Dunkerson also support the collaboration because they believe it will be healthier and more productive for the ministry. Both of them are solo conference ministers, without any additional pastoral staff.

"The notion was that no one should do this work alone," said Dunkerson.  "While it isn't reasonable to try to go back to every Conference having at least a Conference Minister and a minimum of one Associate Conference Minister, it doesn't change the fact that conference ministry can be isolating and emotionally strenuous for the person doing it.  I personally have worked hard at maintaining a peer learning group that allows me to test ideas and seek personal support and have sought to keep the relationship with Rich and the Iowa Conference at a more engaged level than simply neighborly."

"Obviously the plan is also more efficient than the existing system, but economic efficiency isn't the principle motivation for the plan," said Pleva. "The fundamental motivations have to do with the inherent limitations presented by proliferating conference staffs comprised of only one professional.  Conference work is hard and lonely and calls for a range of skills not usually all residing in just one person.  A staff of professionals can support each other for this work and enable those individuals to each focus on areas of greater expertise.  It also has the potential benefit to make the work itself more rewarding and thereby more attractive to the most competent and faithful ministers in our midst."

To be clear, it's not a merger. The three conferences will continue to be governed by three individual Boards of Directors, and each will have their own budget and Annual Meeting. But if consolidating under one conference minister works, future integration can be expected.

"Through these changes of re-distributing how staff time is used (both by pastoral and support staff) and through merging three conference offices into one (physical or perhaps only virtual) office we believe we will be able to more effectively adapt to the changing needs of our churches and the world to which we are all called to minister," said Rankin. "Plus, we are doing a new thing and that makes doing the next new thing a little less scary.  Perhaps it even models for our churches how God's Spirit can be at work in doing a new thing."

If the plan is approved at the Iowa Annual Meeting, the One Staff Model takes effect Jan. 1, 2018, and a search for the Executive Conference Minister begins.

"It's not the magic bullet that 'fixes' what ails our structures, but it's a big step in a direction that might open the door to even more experimentation and creativity," said Pleva.

"The Nebraska Conference has experimented with some new ways of being church for all of my time here," said Dunkerson, pointing to a forty year relationship with the Christian Church (Disciples of Christ) in Nebraska that has included joint staff meetings and shared programs including a shared camp and shared lay ministry school. "But the future is going to demand even more experimentation."

"The technical changes are very focused.  But I believe, spiritually everything changes.  We will find ourselves being church on a conference level in a very different way," said Rankin. "The ways in which we think about how what we do affects others will change.  And if we are really honest, we've probably barely begun to imagine the many new things that God's Spirit will unfold as we live into being church on a conference level in this new way."