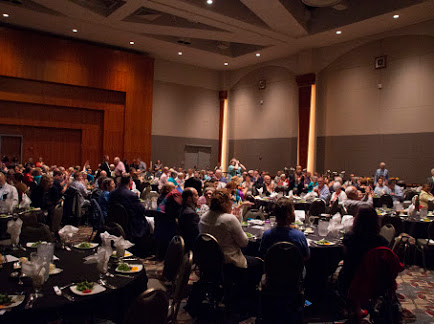 The ONA Coalition wrapped up a pre-Synod gathering with a Friday evening banquet at Milwaukee’s Wisconsin Center. The Coalition’s national conference, June 18-20, was full of worship, workshops, presentations, and celebrations and focused on expanding relationships with partners, including representatives from the Accessible To All movement and WISE (Welcoming, Inclusive, Supportive and Engaged) Congregations for Mental Health. The concluding event on June 21 continued to press the theme of "Living Our Covenants: Into Life," but the evening's speakers stressed that the work is far from done.

After several songs by the ONA Coalition Choir, UCC General Minister and President John Dorhauer began the program by praising the work of the Coalition, especially Andy Lang, the organization’s executive director, describing him as someone with "a gentle, tender, compassionate voice who makes such a profound difference in moving hearts and minds."

Lang addressed the packed room with a brief history of the Coalition's work in which he explained how the organization has grown since 1985, when General Synod voted in favor of inviting congregations to adopt open and affirming covenants. 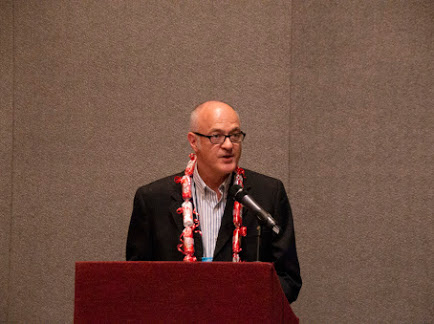 "Since then, we have grown from 15 churches to more than fifteen hundred," said Lang. Last week, the Coalition certified church number 1,612. But Lang went on to point out that this represents only 31% of UCC churches.

"Thirty one percent is not one hundred percent," he said. "So the Coalition cannot stop, will not stop, until the words United Church of Christ on a church sign means always and everywhere that this is a home where queer people and our families are safe."

Lang went on to point out that even ONA churches have more work to do, especially where their covenants fail to sufficiently welcome non-binary or transgender seekers, a number estimated to be as many as 60% of ONA churches.

"That means that our non-binary and transgender neighbors have at best a two in five  chance at finding an ONA congregation that will honor their gender identity and expression," said Lang. "If we are honest, we cannot afford the illusion that our movement has reached or is even close to the point where everyone is safe."

Sticking to the theme of expanding relationships and intersectionality, Lang said that the mission of the Coalition should not settle with inclusion, nor with even expanding boundaries.

"I think our mission is not to widen boundaries but to disrupt them, to build a church without boundaries and without walls," he said. 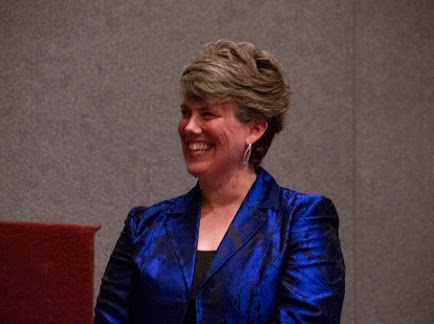 The Coalition awarded the Rev. Rebecca Voelkel with the ONA Courage Award. Voelkel, an ordained UCC minister, has been a national leader working for LGBTQ justice. She was the interim National Coordinator for the UCC ONA Coalition for LGBT Concerns, and is currently the Coalition's secretary and a faith‐based community organizing trainer. Voelkel spoke briefly after receiving the award, thanking many others for their work, saying it was their efforts that allowed her to be where she is today.

González, Interim Conference Minister of the Illinois Conference UCC, shared his personal experience worrying about loved ones at the Pulse Night Club the night of the 2016 shooting in Orlando. González questioned who the shooter had come to kill, the LGBTQ community, the Latinx community, or other marginalized communities suggesting all continue to live in perpetual risk.

González describes what he called "Ay Bendito Syndrome" – a response to tragedy that exclaims "that's so sad" but falls short of any action due to fear. 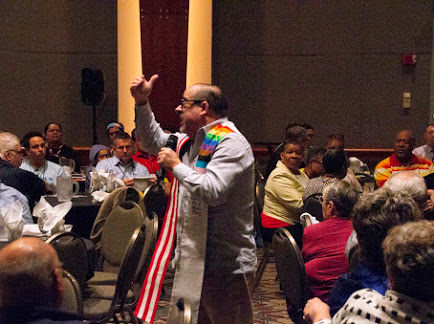 "God and the community and the church and our LGBTQI+ community doesn't need your 'Ay Bendito Syndrome'… what we need is for you to dare to stand up, be loud and proud, and speak to the reality that even though I don't understand you completely, I know that you are a child of God," said González.

He described multiple deaths of LGBTQI+ people just this year and the "So sad" response to these attacks.

"I don't need your prayers," said González, "I need you on the streets, I need you in the line, I need you in the super market, and the by-way and pride parades, and shutting down city hall, and holding politicians accountable. We need to be who God has called us to be."

González ended by taking a minute to talk about Resolution 8, "Stewardship Of Exhibit Space As A Resource For A Mission Of Justice." He said he opposes the resolution because it violates what he believes about being in relationship with others "even if they don't agree with me.

"Creating spaces and places for everyone at the table doesn't mean granting Synod the right to choose who can and cannot be in."