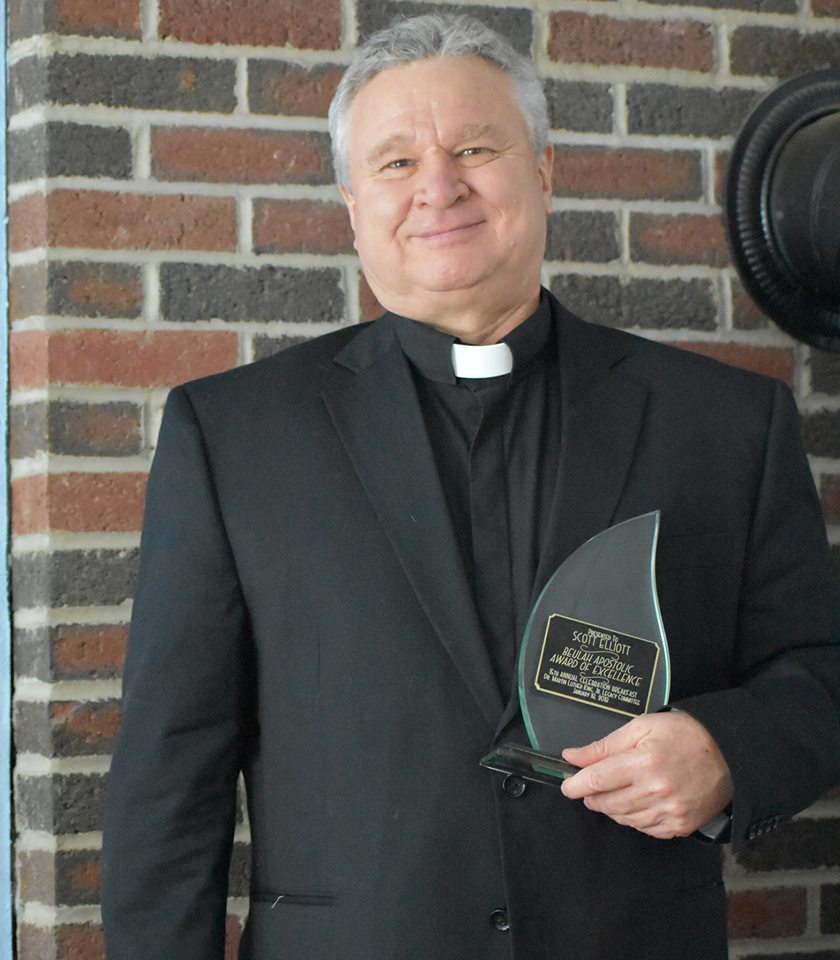 A number of spiritual leaders in rural central Ohio, who have come together in the last year, in a very tangible way, to continue the work of Martin Luther King Jr., used the national holiday as a way to celebrate King's vision of a beloved community, and to check the progress they are making in toward that vision in Knox County.

The Mount Vernon, Ohio group has been leading an interfaith effort against racism in their community through Overcoming Racism classes, a very visible endeavor to continue the work of the civil rights leader. On Monday, Jan. 15, the group honored the local United Church of Christ pastor who had the notion to start the anti-racism classes in 2016.

"In some ways it seems simple to me," said the Rev. Scott Elliott, pastor of First Congregational Church UCC in Mount Vernon. "All of us from different faiths who have come together and been involved have one goal, and that's ending this god awful evil. The small steps we've taken, with classes to overcome racism, have had a profound effect. The manifest is getting together to create an impact in our community."

"This is a very conservative rural area and it is mostly white, but by taking my cues from the UCC justice efforts and from prayers, this work with God leading us has been amazing and grace-filled and love soaked," Elliot said.

His church, First Congregational, has long been involved with justice and peace issues, formed as an-anti slavery faith community in 1834. Under Elliot, the church embraced the Black Lives Matter movement in 2015. Despite some local backlash and after much prayer and study, the UCC pastor decided to take on racism in his community and invited his interfaith colleagues to join him in the Overcoming Racism curriculum.

"The words I heard in opposition, the words I heard in support—along with a lot of prayer—made me realize that the best thing we can do to begin to overcome racism is provide education," Elliott said. He got enthusiastic response from other faith traditions in Knox County, with Christian, Jewish, Buddhist and Unitarian communities joining together to not only partner in the classes, but to hold the first known interfaith service on the Martin Luther King Jr. holiday last year. A spirit of cooperation repeated again on this MLK Day.

In Overcoming Racism, the group devised its own curriculum with Elliott suggesting books for the others to consider and approve. The classes run six weeks, and delve into the connotations of the word 'racism,' offer panel discussions, and space for storytelling around people's individual experiences with racism. Participants have included a college president, professors, politicians, a pastor and civil rights activists, with weekly attendance ranging from 20 to 80 people.

"Attending the Overcoming Racism discussions gave me a new perspective at my local level for a clearly national issue," said Katie Booth, a representative of the Nazarene tradition. "I learned a lot about the history of racism and the realities of its existence in Knox County. More than that, it was powerful to hear stories from those in our community who had unfortunately been on the receiving end of racism because it gave me faces and names to remember when I hear about this issue on a larger scale."

"The interfaith work confronting racism is truly the work of The Church," said William Humphrey, a pastor in the Unitarian tradition. "The response in the community is astounding. One group of community members understand the need, the separation experienced here, and the divide within our community. Another group is oblivious to the need—claiming that it doesn't happen here. One hand has empathy and the other has ignorance. Through the interfaith classes, we've begun the long haul healing process beginning with some acknowledgment of the problems that white supremacy culture brings, and the blindness of the empowered to the plight of the disempowered. This is the start of the healing. "

"The Overcoming Racism course opened my eyes to who my community truly is. I am very involved in our local college, but fail to know our larger community well," said Catie Hayes, a representative of Nazarene tradition. "This course helped me greatly to hear and understand what my neighbors are struggling with and how others are working diligently to make our people whole. This is crucial in the healing process of a community."

"All of this has been powerful and productive and educational," Elliott said. "A glorious interfaith and community effort that has worked to provide regular opportunities to become educated on racism, its existence and how to overcome it; and we have had Sacred time together remembering and celebrating the great civil rights leader Rev. Dr. King and prayerfully considering how to continue the work he and the movement he led began."