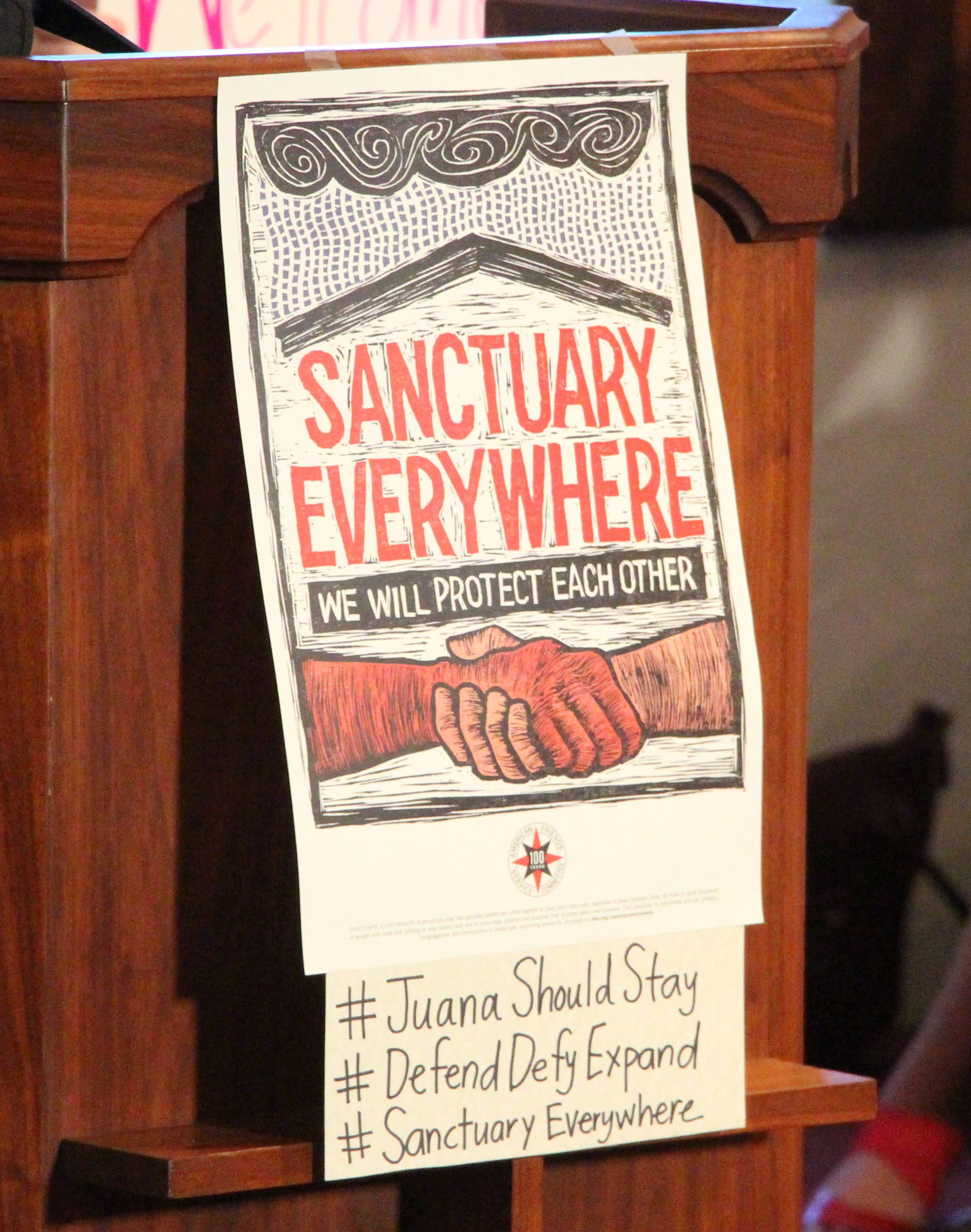 Photo courtesy of the Episcopal Diocese of North Carolina

Two United Church of Christ churches in the Raleigh N.C. area are taking the lead in a discussion and training session around sanctuary this weekend, each hosting one of two workshops that will give interested faith communities an opportunity to network, hear testimony about the need for sanctuary, and discern best practices. More than 130 people from several faith traditions are expected to participate.

"These workshops are important because of the attacks that we are seeing on the immigrant community," said the Rev. Jennie Belle, program director for farmworker and immigrant rights with the North Carolina Council of Churches, and one of the events' organizers. "The decision to rescind DACA is another demonstration that the Trump administration's priority is deportation. Sanctuary is one of the few successful strategies for giving people time to adjudicate their cases and get a fair trial in a court of law."

The United Church of Chapel Hill is hosting the Saturday, Sept 16, workshop, with the Community Church United Church of Christ in Raleigh hosting the Sunday event. "Sanctuary Matters: Testimony and Best Practices" will explore the many ways that congregations can stand up against hate and dehumanization. Topics will include testimony from people who have been in sanctuary and congregations that have opened their doors as sanctuaries, as well as training for congregations that are in the discernment process.

"The conversation around sanctuary began in our church before the Revs. Rick and Jill Edens retired this spring," said the Rev. Susan E. Steinberg, Acting Head of Staff, associate pastor for Faith Formation, United Church of Chapel Hill. "We will go through this discernment, and we have three other discussion sessions after this weekend planned for the congregation to consider different aspects of sanctuary."

Since the 1980's, the Sanctuary Movement has taken up the call to welcome the stranger by providing safe haven to immigrants and refugees in need. Currently, there are three people and their families in sanctuary in North Carolina churches, hoping to win a stay of deportation.

Steinberg said she hopes the testimonies of those involved in sanctuary provide important food for thought. "The Rev. Julie Peeples (who pastors a Greensboro church hosting a mother from Mexico in sanctuary with her two young sons) gives talks about her experience, and says it's lonely work. She wants to help encourage other churches so there's not just a few [in North Carolina.]"

The Rev. David Mateo, an associate pastor at United Church, is a native of Honduras. He'll be offering the opening devotional on Saturday.

"The message I'll be sending will be about the ethical and moral importance of becoming sanctuary," he said. "As a Latino  minister, I can read both sides of the immigration discussion; from somebody who is working with undocumented people and knows their fears, and on the other, somebody who has learned how the system works, and trying to reconcile both moral sides."

Belle said she sees sanctuary as a life-saving ministry.

"My work at the NCCC has changed greatly since the election," she said. "It has always been important for churches to learn more about immigrants and to work together to demonstrate hospitality and welcome to their neighbors. Now it is a matter of life and death; a matter of families staying together. Now more than ever, churches have to work together to protect their immigrant brothers and sisters, and sanctuary is just one way to do that. We will also discuss alternatives to sanctuary as well."

"Most people don't realize that the sanctuary discernment process takes six months to a year, maybe longer," Belle continued. "We need to start having these conversations now so that churches will be prepared when someone needs protection right away."

"Historically, people of faith have been those who have taken a role in social changes," Mateo said. "It is these groups who have read the situations of injustice over the most needy. They are also those who can organize other groups for proposing changes at the political level; but more importantly, they can provide first-hand hope for the affected communities."