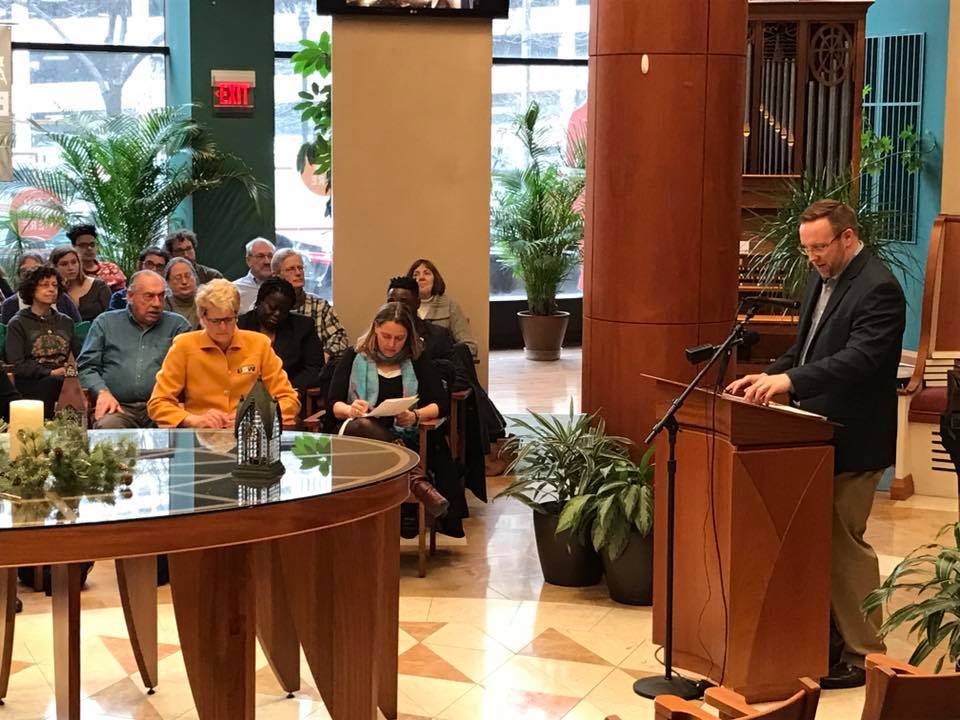 During the first 100 hours of the new administration, people of faith are showing their love for the Earth, and their commitment to people, their planet and their communities.

Faced with a gloomy reality of how the new presidential administration will handle its work on caring for the planet, national leaders of the United Church of Christ and about a dozen congregations are gathering with environmental activists for climate vigils across the country during the weekend to renew their commitment to protect all creation. The vigil at the Amistad Chapel UCC — the street-level chapel in the denomination's national office — began at noon on Friday, Jan. 20, coinciding with the inauguration that brought the new administration into office. It was attended by almost 100 people, a mix of both UCC national staff and members of the public.

"The incoming presidential administration has threatened to send our nation's climate policies into rapid reverse at a time when we should be accelerating our forward movement with heightened moral resolve," said the Rev. Brooks Berndt, UCC minister for environmental justice. "This is a time to renew ourselves to resist harmful policies and recommit to a brighter future for all."

The vigils throughout the UCC are sponsored by the UCC Council for Climate Justice, a group of 28 regional environmental leaders representing 20 different conferences in the denomination. The group is less than a year old, and the weekend vigils will be their first public demonstration to the wider church. The vigils are part of a larger effort of the People's Climate Movement, a coalition of environmental, faith, labor, racial and economic justice groups. The People's Climate Movement was responsible for the largest rally in modern American history, when 400,000 advocates turned out in New York City in 2014 calling for climate action.

Jen Miller, director of Sierra Club Ohio, the oldest and largest grassroots environmental organization and a group that Berndt said is "at the forefront of the environmental movement," said she expects several environmental laws to be pulled back and cuts to the Environmental Protection Agency under the new administration. Already, the White House website was scrubbed of any mentions of climate change shortly after the inauguration. But Miller promised that the Sierra Club will work harder than it ever has.

Mike Foley, a former state representative and director of sustainability of Cuyahoga County, said, "We all come here with anxious minds. There is a sea change at the national policy level of what the environment is going to look like and what our struggles will look like." Foley reminded those gathered that being pushed and challenged is one of the best ways to make progress. "As we work and think about becoming the most environmentally-friendly counties [in Ohio], I encourage you to push and nudge me to do that. Because we have anxious minds."

Bolstered by the belief that the climate affects everything from air quality to residential access to clean water, the vigil at Amistad Chapel was not limited to the environmental realm, but rather justice for all.

"It is about attacking racial disparities in public health. It is about creating green jobs. It is about caring for the future of our children," Berndt said. "For reasons such as these, this vigil is held in solidarity with every struggle for justice waged today, including those concerned with the rights and equality of immigrants, women, people of color, workers, religious minorities, and LGBTQ persons."

Other vigils at UCC congregations planned for later this weekend are likely to echo what took place in Cleveland. At Skyline Church UCC in Oakland, Calif. the Rev. Laurie Manning will gather an interfaith crowd Friday evening of candlelight, poetry, wisdom, and Taize music.

"Many of us are still reeling from the unimaginable reality of the inauguration of Donald Trump as President, and the implications for ourselves, for this country, for this world and for our climate — especially for those most vulnerable," she wrote. Attendees are invited to "experience your experience; feel your feelings and honor all of our inner strength, community, light and hope as we prepare for what’s to come."

Community UCC in Raleigh, N.C., is hosting two vigils this weekend, the first on Friday and a second on Sunday, Jan. 22. While planned as a Christian service, it is open to people of all faiths. "We'll gather with others for a time of prayer as the country inaugurates a new president," said the Rev. Jane Smith. "Expect silence, readings from the Bible and an opportunity for people to speak from their heart."

When the vigils conclude, Berndt said that the energy built this weekend to work on climate care at the local level will build toward a national march on Washington at the end of April. "It's about people pulling together across faiths and organization for an effort for the good of the environment, for our economy — those two things go together — and that people can come together, whether they belong to a union, a faith community or an environmental group," Berndt said. "We have to be vigilant about what's to come."