They may have closed their buildings in response to the global coronavirus pandemic, but many United Church of Christ congregations still offered the comfort of music and prayer – and urged people to rise up and demand better public-health leadership – as they moved worship services to the internet on Sunday, March 15.

At the start of what one pastor called a "season of being together while we are apart," the online experience was not the same as gathering in familiar sanctuaries. But for many UCC members connecting by phone or computer, it was interactive. Some services drew dozens, hundreds or even thousands of remote viewers, with many sending in prayer concerns, greetings, financial gifts and "amens" via text and social media. At Trinity UCC in Chicago, a handful of people even joined the church via an online altar call.

'Adjust with grace and creativity' 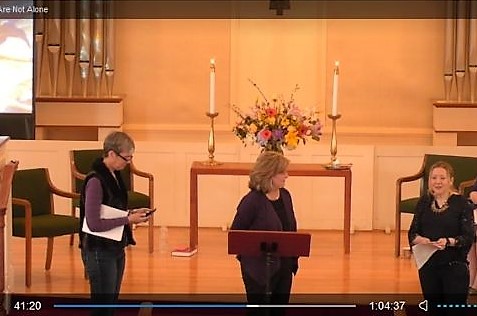 Shifting across time zones all day from his home near Cleveland, the Rev. John Dorhauer, general minister and president, worshiped online with Avon Lake (Ohio) UCC, Countryside Community UCC in Omaha, Neb., Calvary United Protestant Church in Park Forest, Ill., First Congregational UCC in Colorado Springs, Plymouth UCC in Seattle and Kawaiaha'o UCC in Honolulu. "I wanted to bear witness to our endurance and adaptability and also be in solidarity with all who are learning to adjust to our circumstances with grace and creativity," he said. "This has been a faith-filled and deeply enriching experience."

"I'm so inspired this morning by how our pastors and our congregations have met this moment with creativity and perseverance," said the Rev. Shari Prestemon, who leads the Minnesota Conference. Like many of her colleagues in Conference ministry around the UCC, she had urged congregations to suspend in-person gatherings as a health precaution. At mid-morning, she posted on Facebook that she had experienced "five of our congregations' virtual worship services so far, blessed by three sermons, multiple prayers, beautiful music, holy purpose. Even connected with the Rev. Tara Bauer, serving as military chaplain in Italy, who also led in virtual worship."

For larger congregations already in the habit of live-streaming their services, it was a matter of adapting to a sanctuary that was empty except for a few leaders and musicians. Other churches hustled to create live or prerecorded services, using tips like those linked from the UCC's national coronavirus resource page or from Conference websites, such as this one from Southern New England.

People tuning in via Facebook Live to Rock Spring Congregational UCC in Arlington, Va., were greeted by pastoral sights and sounds. An organ played "Consolation," a tune familiar to many churchgoers as a setting of Psalm 23. The camera panned down from a high cross to reveal an altar decorated with flowers and candles. The Rev. Kathy Dwyer, senior pastor, stepped into view and gave a welcome.

"We are so disappointed that we can't be gathering together here in this physical space," Dwyer said. "But we know that the social distancing that is being asked of us is critical to the healing of our world." She introduced associates who had phones ready to receive prayer requests and sermon comments via text message. The camera swung to a projection screen that displayed their numbers and a "text to give" option. She encouraged those at home to light a candle, too – "or open a drapery or turn on a light" – and the service began with a hymn. 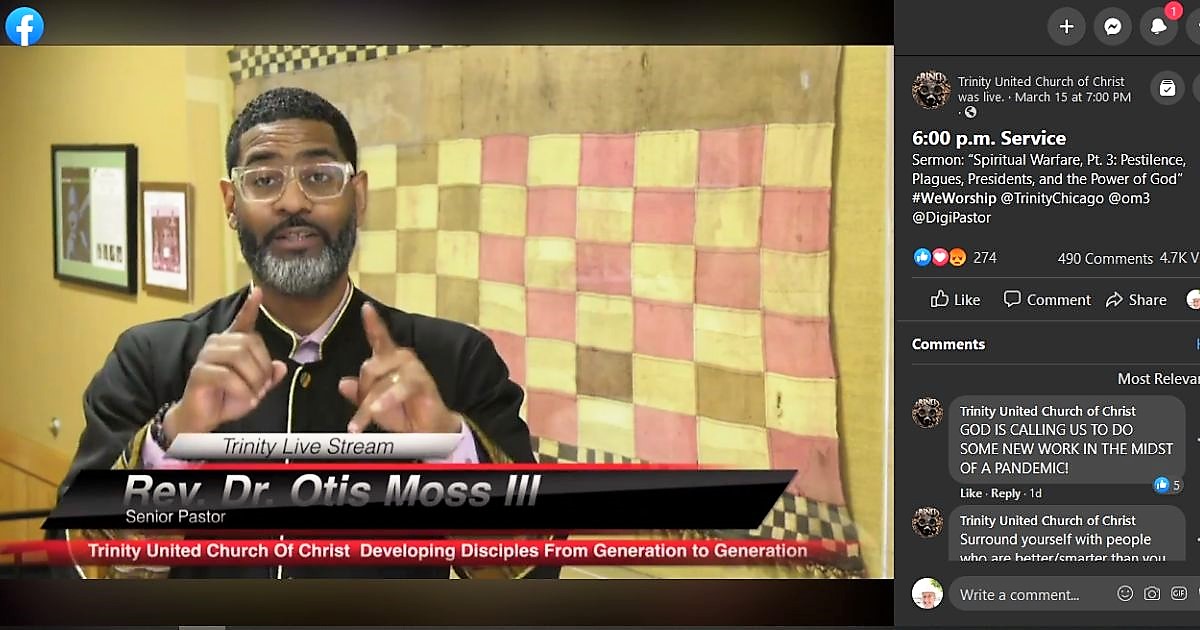 Visuals also helped set the tone at Chicago's Trinity UCC, where the Rev. Otis Moss III described special items arranged at the pulpit: a cross, a Bible and a prayer staff, all from the Ethiopian Orthodox Church, "the oldest tradition in the world." "I take this staff and lean on it because we are leaning on God during this moment of pandemic," Moss said, noting that ancient Africans had "witnessed famines, plagues, political corruption, inept government." "If our ancestors were able to make it through these moments," Moss said, "we also can make it through these moments when we lean on God."

Trinity's Facebook Live stream, which attracted more than 4,000 views, included live music from the Trinity band and choir – with singers spaced farther than usual from each other. Moss encouraged viewers to check in on and help one another, especially the elderly and others in need, even while exercising precautions. In his sermon, "Pestilence, Plagues, Presidents and the Power of God," he said Egypt's biblical Pharaoh should have been humbled by the emergencies that struck his nation – and so should today's U.S. president.

From city pulpit to island farm

At Park Avenue Christian Church in New York City, dually affiliated with the UCC and the Christian Church (Disciples of Christ), the Rev. Kaji Douša, senior minister, also invoked a biblical story to combine pastoral concerns with a call for more government action against the spread of the virus. Speaking via Facebook from the church's stone pulpit, she acknowledged the grief the pandemic is causing. She named Elisabeth Kübler-Ross's famous five stages of grief and singled out one.

"We need to be angry," Douša said. "In the Exodus, Moses was in denial. He was so busy not noticing his people dying of thirst that he forgot to ask God for help. The people's thirst was a 'hoax' manufactured by his opponents to challenge his leadership. But the people stood up. They made their demands. They forced Moses to move past his denial." Whether it's a national official slow to act or a mayor who has not yet closed schools, "We need these leaders to hear from us," she said. "We need people outside of [U.S. Sen.] Mitch 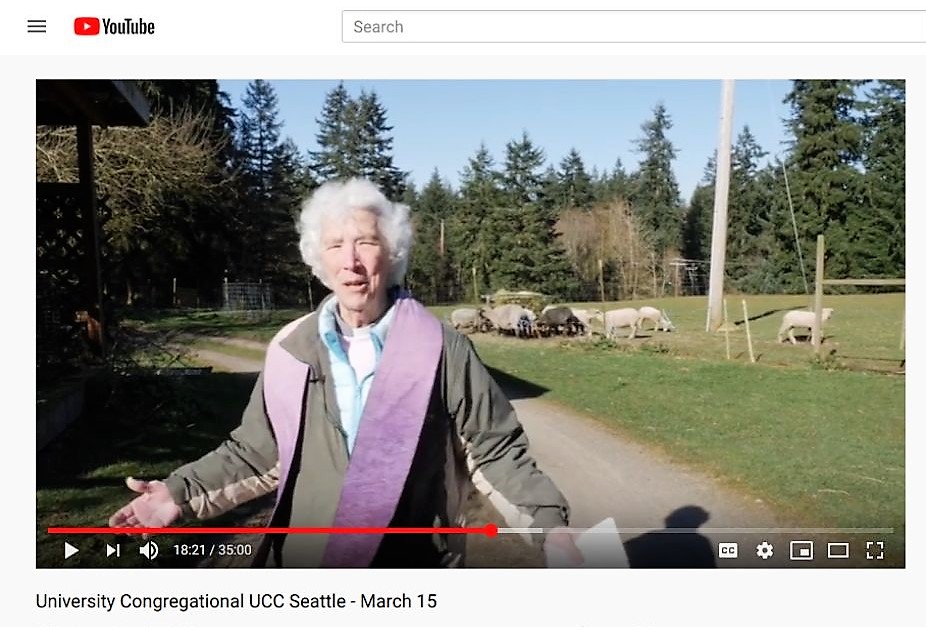 McConnell's house – at least 10 feet apart – making his life a living hell. We need to pick up the damned phone and flood Congress’ lines. On both sides of the aisle."

In Seattle, the coronavirus's first and hardest-hit American city, the minister of University Congregational UCC went live, solo, from an outdoor setting – her farm on nearby Whidby Island. With one associate wielding a phone for Facebook and another recording with a camera for YouTube, the Rev. Catherine Foote moved around the pastoral setting – from a blooming bed of daffodils, to a growth-inducing compost pile, to a barn, where she released sheep to feed in a pasture.

Throughout the walking tour, she paused to offer elements of worship: reflections, prayers and songs – especially familiar ones – as she spoke of "this season of being together while we are apart." "What we know by heart matters," she said. "And we also have to open our hearts to what new things are coming." She gave the Lord's Prayer as an example: "It doesn't just ground us as individuals, it connects us as a community."

"This week, when we say this prayer, when I say this prayer, I'll be hearing your voices, too," Foote said. "I'll be holding you. I'll be remembering what matters most – our connection right here, right now, every day."