Minnesota churches, as kindred spirits, band together to pledge sanctuary 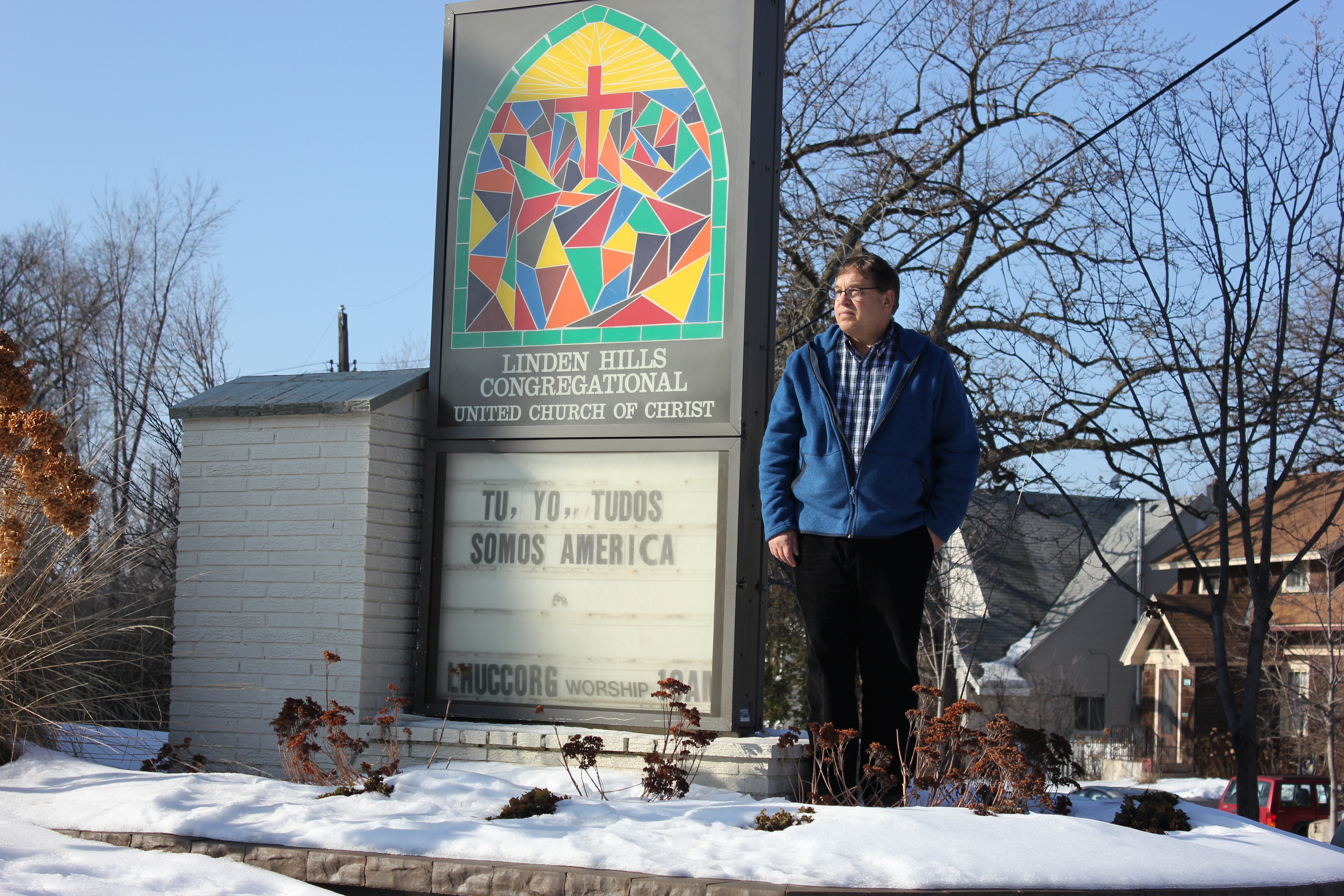 A number of United Church of Christ congregations in Minnesota are preparing space, as sanctuary churches, to make a home for immigrants threatened by the new administration's immigration policies or pledging to be the support system for those churches opening their doors to their neighbors.

Linden Hills First United Church of Christ in Minneapolis voted on Feb. 19 to declare itself a sanctuary church. First United Church of Christ, west of the city in Northfield, declared itself a sanctuary congregation on Dec. 11. But the work in both faith communities started right after the election in response to President Trump's goal to deport two to three million people.

"Declaring First UCC a refuge for undocumented immigrants facing an immediate threat of deportation, we took the vote as a congregation hoping for the best and preparing for the worst," said the Rev. Todd Smith Lippert, senior Minister of First United Church of Christ.

"Trump's plans violate Christian values," he continued. "We are called to love our neighbor and to care for the stranger in the land. This call is absolutely central to our faith. Many of our immigrant neighbors in Northfield are undocumented, and many have been here for 20 years. Our immigrant neighbors are a part of our community, our businesses, our neighborhoods, and our schools. Now, parents and children are terrified, afraid they will be separated from one another. An entire portion of our town is living in fear every day."

"We have been involved in social justice issues before, like most UCC churches," said the Rev. Eliot Howard, pastor of Linden Hills UCC. "But this whole issue really feels like the Spirit is calling us to this with a greater intensity than ever before. We feel the need to have to be really public with this. To take a stand so that those who are paying attention see the opposition building to some of these policies around immigration."

"Our churches do work together and we all do what we can," said Howard, "as kindred spirits."

Right now, the Linden Hills congregation is immersed in a process to decide what protocols and procedures need to be in place so the church can make a sanctuary space happen.

"There was, and still is, much that we need to do in order to welcome an individual or family should the need arise. And a sense of urgency has definitely 'stepped on the toes' of customary church decision-making," Howard said. "Our experience of sanctuary church has felt more like 'Go. Ready. Set.' Different than the customary 'Ready. Set. Go.' But since early December when a preliminary declaration of sanctuary was made, we have been engaged in Bible study, prayer, small group conversations, strategic meetings with other sanctuary or 'sanctuary- supporting' congregations."

"The fear for beloved family members and friends raises the question, 'How can we create an atmosphere where we can all live and thrive?'" said the Rev. Lawrence Richardson, interim minister for faith formation at Linden Hills UCC. "We want to create a more just, more peaceful environment for all of us."

To that end, other UCC churches and the general public are offering much-needed assistance.

"Under the umbrella that this feels different… people who have no previous connection to Linden Hills have just shown up," said Howard. "The general public feels called to help us with contributions or other assistance. I have not experienced that before. People with no known affiliation with the church have called, emailed, dropped by. Some with financial donations and most with offers to volunteer. There's energy and sense of urgency. People want to get active in this political climate, and this is how we are seeing it."

Additional help is coming from the ISAIAH faith coalition of churches which advocates for social, racial and economic equity, and is coordinating the sanctuary movement in Minnesota. Richardson said he has benefited from a couple of workshop sessions the coalition has organized for ideas on what people of faith can do.

"Perhaps the fervor for mass deportation is being met by a spiritual fervor that is expressed in compassion and is yet one more manifestation of Radical Hospitality," said Howard. "We also feel 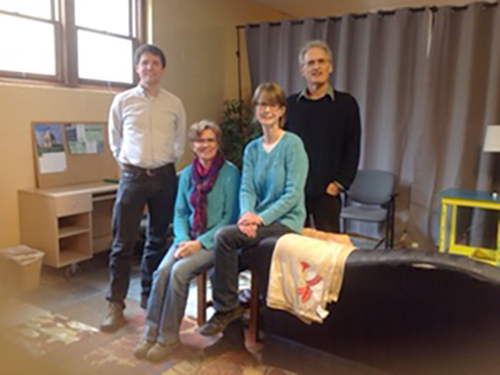 Linden Hills UCC and First United Church of Christ are the two newest UCC congregations in the sanctuary movement. Robbinsdale UCC, on the northwest edge of Minneapolis, and Macalester Plymouth United Church on the Macalester College campus, declared sanctuary last year. There are 15 Minnesota congregations which have pledged or voted to become sanctuaries, and the movement continues to grow. An area synagogue is now ready to serve as sanctuary space, Howard said, and there are even more congregations in discernment around the issue. In addition, a number of congregations, such as Mayflower Church UCC in Minneapolis, have vowed to support those who plan to offer refuge.

"We became sanctuary supporting a year ago when Robbinsdale declared sanctuary," said Diane Haines, leader of Mayflower's Global Advocacy team and chair of the Minnesota Conference Immigration Team. "We went to the church council because we wanted to assist them. Everything is turned upside down right now because the man who is president is so unpredictable."

"We offered a forum to our UCC churches Feb. 18 — a day-long forum on sanctuary and becoming immigrant welcoming. Thirteen UCC churches showed up, along with churches from two other denominations," Haines continued. "They all came for the purpose to decide what they are going to do about sanctuary. I am speaking at churches the next three Sundays. There's been a real spurt in growth. Our churches are realizing we got to rise up and do something!"

The Rev. Oby Ballenger, pastor of Edina Morningside and chair of the Minnesota Conference UCC Racial Justice Team, underscored the growing support among UCC churches. "A number of our congregations are interested in supporting immigrants and I expect they will all step up to assist and support the sanctuary congregations."

"Supporting congregations are every bit as important as a sanctuary congregation," Howard said. "We have 220 members and we are going to need a lot of support. We will not be able to do this alone. We do not feel like we will be."

"We are pledging to defend the place of our immigrant neighbors in our community," said Smith Lippert. "We are also standing with other Sanctuary Churches and UCC Sanctuary Churches in Minnesota as a primary voice of resistance to the Trump administration's dehumanizing immigration policies. This is a time when the church can show the country what loving the neighbor really looks like."

Richardson agrees, "I feel if we all do the part that we can do, helping sanctuary churches and sanctuary supporting churches to contribute… It will be more than enough."

"Lastly, but very importantly, it is not only the stories of Jesus, the prophets and all who have come before who energize us. It is the real-life contemporary stories of those under threat of deportation who give us the fuel we will need for this task," Howard said. "These are our neighbors, these are people working, volunteering, worshiping, parenting and living alongside us. We are aware of their fear. It is a fear that is growing. But we have witnessed their courage — many women and men aligned with Isaiah, doing the work of justice, work that requires some to put their own safety and sense of place at risk."