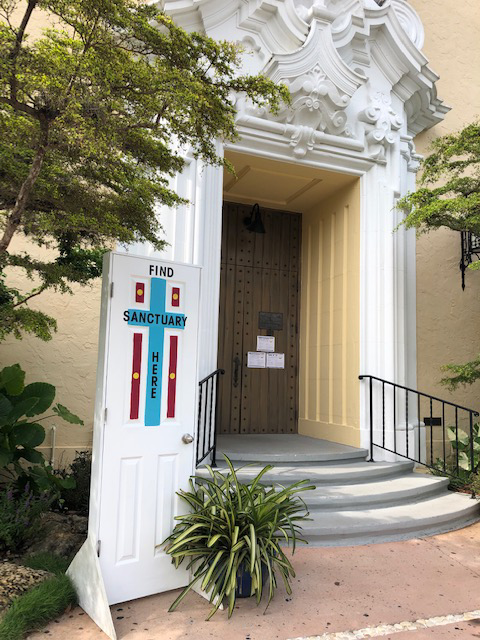 A Miami congregation lived into its commitment as a sanctuary church recently and came away forever changed. As the Rev. Laurie Hafner, senior pastor of Coral Gables Congregational United Church of Christ said, "This is a ‘rubber meets the road' kind of church."

Coral Gables UCC welcomed a family from Honduras for short stay on July 17 after they had no other place to go. Vetted by Catholic Legal Services, with an attorney and an immigration status "in process," two boys and their mom and dad moved into the Chapel for just over a week. Quoting Raul Hernandez, who heads up the church Sanctuary work, "To say that the experience of our sanctuary outreach with this humble Honduran family has been extraordinary would be the understatement of the year."

Lisa LeSueur, minister for Congregational and Staff Care, shared the story eloquently from the pulpit on the Sunday the family was in sanctuary. Here is an excerpt from that July 21 sermon.

It was on Wednesday, just before lunch, as I was getting in my car, that I received a text message from Pastor Laurie that read simply "We have a family. When can you be here?" It took a moment for me to fully grasp exactly what she was saying. However, as it became clearer to me, the first image that came to my mind was the door that appeared near the front entrance of the church last weekend with the words "Find Sanctuary Here" painted on it. I was about to learn what that really meant.

As Pastor Laurie stated, this was the time for the "rubber to hit the road" and to put all our talk into action. As Christians, we are called to love our neighbor, no matter what that neighbor might look like or where their journey has taken them. As a church, we have expressed our commitment to living out God's promise of love and extravagant hospitality, for all of God's people, including the stranger that resides among us. It has been almost two years since we began to give serious consideration as to what it would mean to provide sanctuary for an individual or family who is living in fear of deportation. These conversations culminated in a unanimous decision by members of this church to open our doors even wider, by offering sanctuary to undocumented immigrants due to the current deportation policies of this country. To be clear, this is not meant to be a long-term solution. We have agreed to provide short- term living arrangements and care, to any individual or family in need of a few days to work out a long- term housing solution.

We often speak of seeing the face of God in each person that we meet. I can tell you that God showed up at the church door on Wednesday afternoon in the face of a weary mother, father and their two sons, who traveled to this country from Honduras because they fear persecution.

My first thoughts when I saw them were, thank goodness they are still together as a family. The boys, taking everything in as if it were simply a big adventure, could easily have found themselves separated from their parents at the border and placed in a facility such as the Homestead Detention Center. Instead, they seemed excited to be here and readily laughed and grinned as the adults talked. As the family's story unfolded, I could understand why the boys were so excited to be here at the church with the promise of a bed to sleep in and a hot meal to eat.

As someone who does not speak Spanish, I picked up what I could of the initial conversation. The family made the difficult decision to flee their home country in May after experiencing gang violence and the murder of relative that left them in fear for their lives. When they reached the border, they were detained by border patrol for several days. After being let go on their own recognizance with the promise to appear in court, they traveled to Pensacola in search of a family friend to assist them. When that did not work out as planned, a local church gave them bus tickets to come to Miami to seek help from Catholic Legal Services who thoroughly vetted them before reaching out to the church for assistance. During their two-month ordeal, they spent many days and nights living on the street, without a roof over their head or a way to feed their children. Yesterday, the mother gently chided her oldest boy for eating so much. He replied that he was making up for the meals he had missed when they were homeless. Their story speaks of love, resilience, fear and survival.

The excitement around the church since Wednesday has been palpable with so many people referring to our guests as "our family" and jumping into action. I had the opportunity to see God in the face of so many church members who have been eager to meet them and provide for them in any way needed, several taking the time to convey to me their own story of once being the stranger.

Bags of bedding, towels and toiletries were delivered within hours of the family's arrival. Within the first 24 hours, many of the necessities had been attended to, including deliveries of food and clothing, as well as games and books for the children. People were volunteering to spend the night, deliver meals and donate money. The response has been overwhelming and we have done our best to answer all the calls, texts, emails and personal visits that we have received, all with offers to help in any way.

Our guests have joked with me about the fact that I don't speak Spanish as I am often in need of a translator. There is no doubt, however, that they have become a very special part of mi familia de la iglesia, as love transcends all language, borders, and boundaries. I can also attest to the fact that this church has become very much a part of their familia as well. The boys eagerly greet all visitors with a big smile and a hug, all the while exclaiming "Buenas dias." I have overheard them referring to some repeat visitors as abuela or tia. Whenever I leave for the evening saying "Buenas noches" the whole familia comes to give me a big hug. You see, I have been working a little on my Spanish, not just so I can communicate a bit easier with these guests, but with the next guests that appear at our door as well.

Stephen Mattson writes in an article [inSojourners] titled Christianity 101: Love, not Deportation: "Although people can be given labels such as alien, immigrant, undocumented and illegal, as Christians we should know that immigrants--regardless of their legal status--are individuals deeply loved by God and created in God's Divine image." We are called by Jesus to feed the hungry, provide drink for the thirsty, and clothe those who have none. As we extended our welcome this week to the strangers in our midst, this church has shown itself to be, once again, a sanctuary for us all.

After Catholic Legal Services moved the family of four into another home late last week, LeSueur noted that this was the first time Coral Gables has offered sanctuary. The church expects to do so again. "I think I can speak for many members of our church when I say that this has been a wonderfully transformative moment for our congregation."