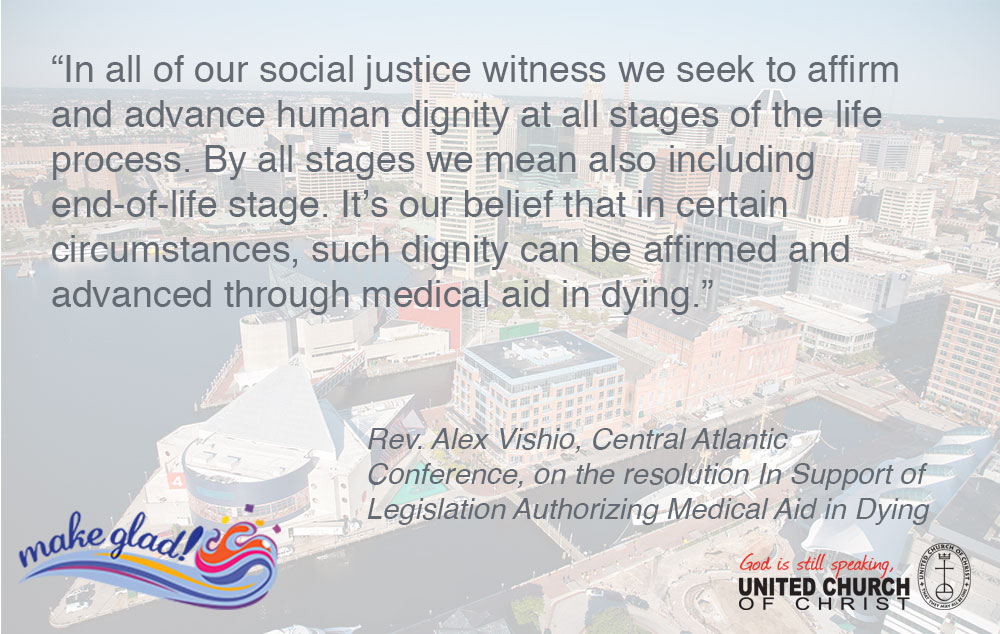 The United Church of Christ has a history of wrestling with controversial social justice issues ahead of the curve as the church lives out its call to build a just world for all people. At General Synod 2017 this week in Baltimore the governing body of the denomination will be asked to consider a resolution that supports and urges nationwide enactment of legislation authorizing medical aid in dying, under very specific guidelines.

"In all of our social justice witness we seek to affirm and advance human dignity at all stages of the life process. By all stages we mean also including end-of-life stage," said the Rev. Alexander Vishio, associate minister for social justice and witness, United Church of Christ Central Atlantic Conference. "It's our belief that in certain circumstances, such dignity can be affirmed and advanced through medical aid in dying."

The resolution submitted by the Central Atlantic Conference outlines specific guidelines, to be determined by each State and the District of Columbia, for an adult patient who: has a medically diagnosed, terminally/incurably debilitating illness or condition; has a medical prognosis of death within six months; is legally competent to make medical decisions; and is expressing a voluntary and personal choice to die.

"Because we are advocating for the right to medical aid in dying, that needs to be distinguished from the claim that it is always right to choose that option at the end of life," said Vishio. "We are not affirming that."

"And we would not be in favor of medical aid in dying legislation if we thought it created a 'slippery slope' whereby our culture's respect for human life is demeaned or devalued," Vishio continued. "There's been no study, no recorded incident in the United States, no evidence of a heightened risk of the practice of abuse in the case of vulnerable persons; the elderly, the poor, the disabled, racial or ethnic minorities."

Currently in the United States, six states —California, Colorado, Montana, Oregon, Vermont and Washington— and the District of Columbia have laws on the books that permit medical-aid-in-dying.  Twenty-six other states are now wrestling with this issue, and Vishio said polls reflect a greater acceptance of this type of legislation.

"We in the CAC have been allying with Compassion and Choices (the nation's oldest, largest and most active nonprofit organization committed to improving care and expanding options for the end of life), on the legislation that passed in D.C.," Vishio said, "and working for legislation in Maryland, Delaware and New Jersey."

The Unitarian Universalist Association endorsed medical aid in dying in 1988.

Will Irwin, a retired federal administrative appeals judge and member of Westmoreland Congregational United Church of Christ in Bethesda, Md., helped write the CAC resolution. He believes that God would support providing a way for people in pain to welcome death.

"The question of whether a person should have the choice, under the specific circumstances set forth, to end his or her life, is still controversial, on grounds ranging from theological to practical, and the language of the proposed resolution cannot and does not purport to resolve all questions and doubts about the wisdom of making that choice available," said Irwin. "What we hope it does do is offer a basis for a majority of delegates to approve of making that choice available, provided that new state laws include procedures like those contained in existing legislation for safeguarding the sanctity of human life and preventing abuse of a person's right to decide whether to exercise that choice."

The UCC General Synod has a history of considering this issue, first in 2007, and again in 2009 when it was referred for study. The study process, conducted by a working group convened by the UCC's Justice and Witness Ministries, resulted in a six-week guide produced in 2010, 'Faithfully Facing Dying: A Lenten Study Guide on Critical Issues and Decisions for the Members of the United Church of Christ,' a resource for congregations, Associations, and Conferences to use in discussing the range of choices involved in their understanding of death and dying.

The working group reported in March 2011 it remained divided on the question, and the issue didn't come up for consideration at General Synod in 2011, 2013 or 2015.

"In the meantime, medical-aid-in-dying has been adopted by legislatures in several states and the District of Columbia, has been the subject of proposed legislation in more than twenty other states, and has been the subject of extensive public discussion," Irwin said. "We believe it is time to ask the delegates to General Synod to consider whether they wish to add the denomination's voice in support of this personal choice being made available in more state laws."

Irwin points to existing laws and proposed bills that help safeguard and ensure that personal choice.

"The recent Maryland bill, for example, provided that (assuming the eligibility criteria, e.g., a terminal illness with a prognosis of 6 months to live, are met), the person must 1) make an oral request to his or her attending physician; 2) then make a written request in accordance with a prescribed form, witnessed by two persons; 3) then make a second oral request after a specified period of time; 4) the attending physician must certify to the person's medical condition and then 5) refer the person to a second physician to confirm the 6-months-to-live prognosis; and 6) if either physician thinks the person may not be able to make an informed decision, e.g., because he or she is depressed, the person is referred to a mental health professional for an assessment; 7) then the attending physician must counsel the person about available alternatives, e.g., palliative care, and confirm in writing that the person was not subject to undue influence in making his or her decision," he said. "And, importantly, the person must be able to take the prescribed medications on his or her own, without assistance – although this requirement has been criticized: what if I am so sick and weak that I cannot hold a glass up to my mouth?  Am I not allowed to have someone help me do what I have decided I want to do?"

Besides a discussion about the specific guidelines and the theological grounding of the resolution, General Synod delegates will have an opportunity also to hear personal testimony on the issue.

"Dan Diaz, husband of Brittany Maynard, will be at General Synod," said Vishio. Maynard, one of the faces of the medical aid in dying movement, was diagnosed with an aggressive terminal brain tumor in 2014, and died in November of that year in Oregon, since her home state of California did not have a death-with-dignity law at that time. "He has made a passionate commitment to carry on his wife's legacy in advocating for medical aid in dying in desperate end-of-life circumstances.  We are still working on how — he'll be speaking in various venues, have an opportunity to talk to visitors and delegates and share his story. And Brittany's story. His testimony gives us a chance to put a face to the movement, to bring concrete vividness, life to the abstract discussion."