Media-justice lecturer calls for fight to keep internet open to activists, people of color, the poor

In an annual media-justice lecture Thursday, Oct. 15, an activist for civil rights, racial justice and “revolutionary love” issued a call for a free and open internet, “a place where all of us have a voice.” 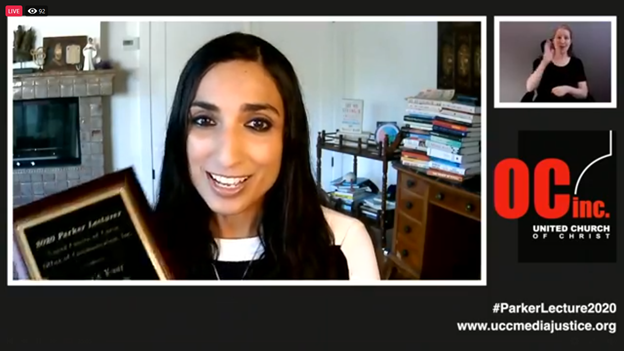 delivered the Everett C. Parker Ethics in Telecommunications Lecture, sponsored by OC Inc., the media-justice arm of the United Church of Christ. The lecture and awards ceremony usually takes place in person, over a meal. This year it was held entirely online because of the COVID-19 pandemic. It was recorded and can be viewed at the OC Inc. Facebook page or by clicking on the image at right.

Also honored at the event was retired Federal Communications Commission official Karen Peltz Strauss. She received the Everett C. Parker Award for her work on laws requiring accessibility measures for people with disabilities in telephones, television and other communication media.

The awards lecture is named for the founder of the UCC’s national communication office and its companion media-justice arm, the Office of Communication, Inc. Parker’s decades of victories for ethics and fairness in public media through OC Inc. included major broadcast license and court cases during the Civil Rights Era.

‘Next frontier of Everett Parker’s dream’

The Rev. Karen Georgia Thompson, UCC associate general minister, introduced Kaur as a “particularly well suited” Parker lecturer, given her degrees in law, theology and media, her track record as an activist and her active use of multiple media.

Widely known for her 2020 book, “See No Stranger: A Memoir and Manifesto of Revolutionary Love,” Kaur has also worked in front of and behind the camera. Her November 2017 TED Talk, “Three Lessons of Revolutionary Love in a Time of Rage,” has drawn more than 133,000 views on YouTube alone. Her films, made in collaboration with others, include:

Kaur focused her lecture on a free and open internet as “the next frontier of Everett Parker’s dream.”

She described seeing ordinary people launch digital movements for social justice through Groundswell, a platform she founded for that purpose. And she has seen others fight for internet freedom and access as “a place where all of us have a voice” through Faithful Internet, which she and OC Inc. helped start.

The developments of 2020 – including “an uprising for Black lives and racial solidarity like the world has never seen” – show why unfettered internet access is so important, Kaur said.

Especially for people of color, poor people and those who join them in protesting injustice, many recent movements would not have been possible without digital platforms, she said. She numbered among them the women’s #MeToo movement, Native Americans’ actions for water rights, protests of U.S. policies banning travel from predominantly Muslim countries and separating immigrant families at the southern border, and widespread publicity of the names of George Floyd, Breonna Taylor, Ahmaud Arbery and other African Americans killed by police and vigilante violence.

Such online freedom and openness is under threat, Kaur said. The FCC’s Open Internet Order of 2015 “banned carriers from blocking or slowing down websites at will,” Kaur said. “It was praised as one of the greatest public-interest victories in US history.” Now, she said, under the FCC’s 2017 reversal of that order, internet service providers are free to pursue  profit at the expense of the public interest.

She invited the lecture audience into the fray, listing three actions they can take now:

Drawing on her Sikh tradition, she invited the audience – whether media activists, corporate employees, church members, students or others – to imagine a brave ancestor whispering in their ear. Now is the time to stand up for justice in the digital world, she said, just as Parker innovated for fairness in the most important media of his day. “It’s time to be as brave and as bold as Everett Parker was,” Kaur said. “You have an essential role.” 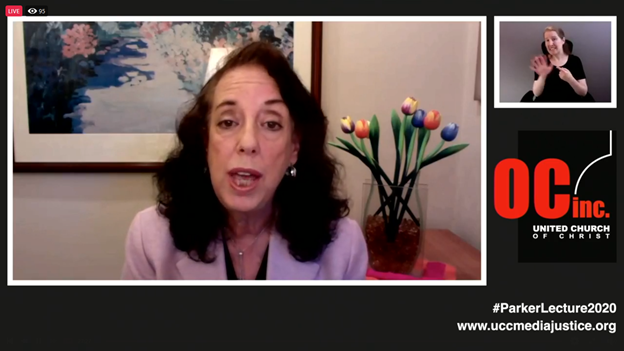 ‘Part and parcel of the civil rights struggle’

Peltz Strauss received the annual award given to someone “whose work embodies the principles and values of the public interest in telecommunications and the media.” A former deputy chief of the FCC Consumer and Governmental Affairs Bureau, she retired in 2018. A focus of her career of more than three decades was making tools of communication accessible to people with disabilities, especially the deaf community.

Among other things, Peltz Strauss played an instrumental role in developing Title IV of the Americans with Disabilities Act, requiring telephone relay services, and Sections 255 and 713 of the Communications Act, which mandated telecommunications access and television captioning. She also helped create the National Deaf-Blind Equipment Distribution Program, which allocates $10 million a year to support free communications equipment to low-income persons who are both blind and deaf.

In accepting the award, she recounted the struggle for those still-important forms of access and linked it to today’s continued struggle. “As technologies continue to evolve in the digital age, … it’s so important to ensure that everyone, including people with disabilities and aging adults, are not left behind,” Peltz Strauss said. “This award acknowledges that these ongoing struggles for disabilities rights are part and parcel of the civil rights struggle that Everett Parker waged.”