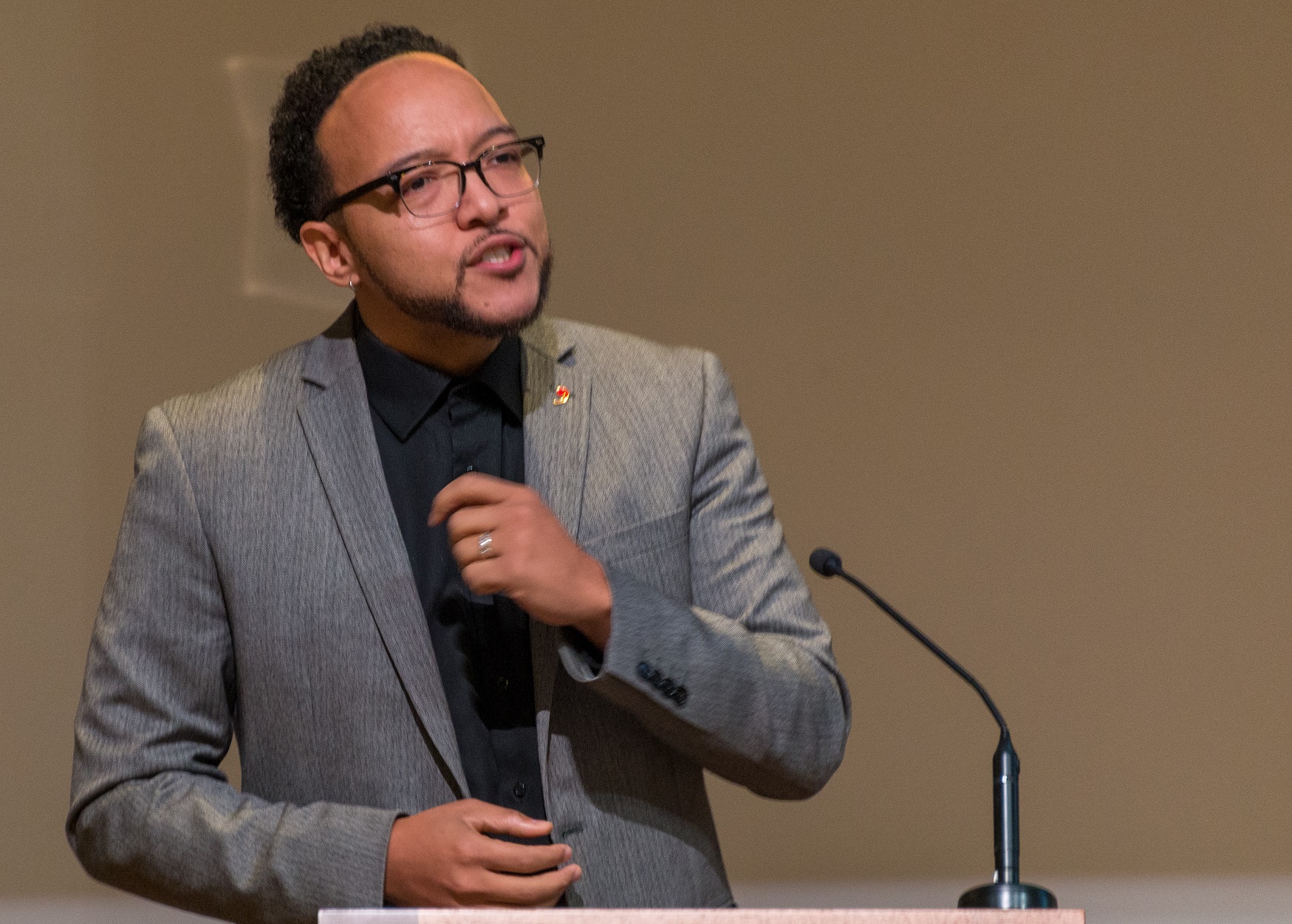 The Rev. Julian DeShazier, senior pastor of University Church in Chicago and the Emmy Award-winning hip-hop artist J.Kwest, brought the full range of his skills to his Parker Lecture address. To underscore his theme, he began with a rap:

A different kind of statement, you looking at me

Like please stop rapping! So I can hear what you're saying

DeShazier related a parable of the Akan people of Ghana about "Sankofa," a bird who struck out from her community until she was bullied by "Big Bird," and returned home, regretting that she had ever left. But then her village told her, "Don't forget us this time. Don't forget who you are." With her confidence renewed, she returned to confront Big Bird and found that he was gone.

The lesson, DeShazier said, is "you can't know where you're going unless you know where you've been." Sankofa, he said, "reminds us that the past and future are tied together, that destiny is not only a matter of will but of knowing where you and your people have been, what that creates in us. Identity formed through the past, which means the story must be told, told well, and told rightly. 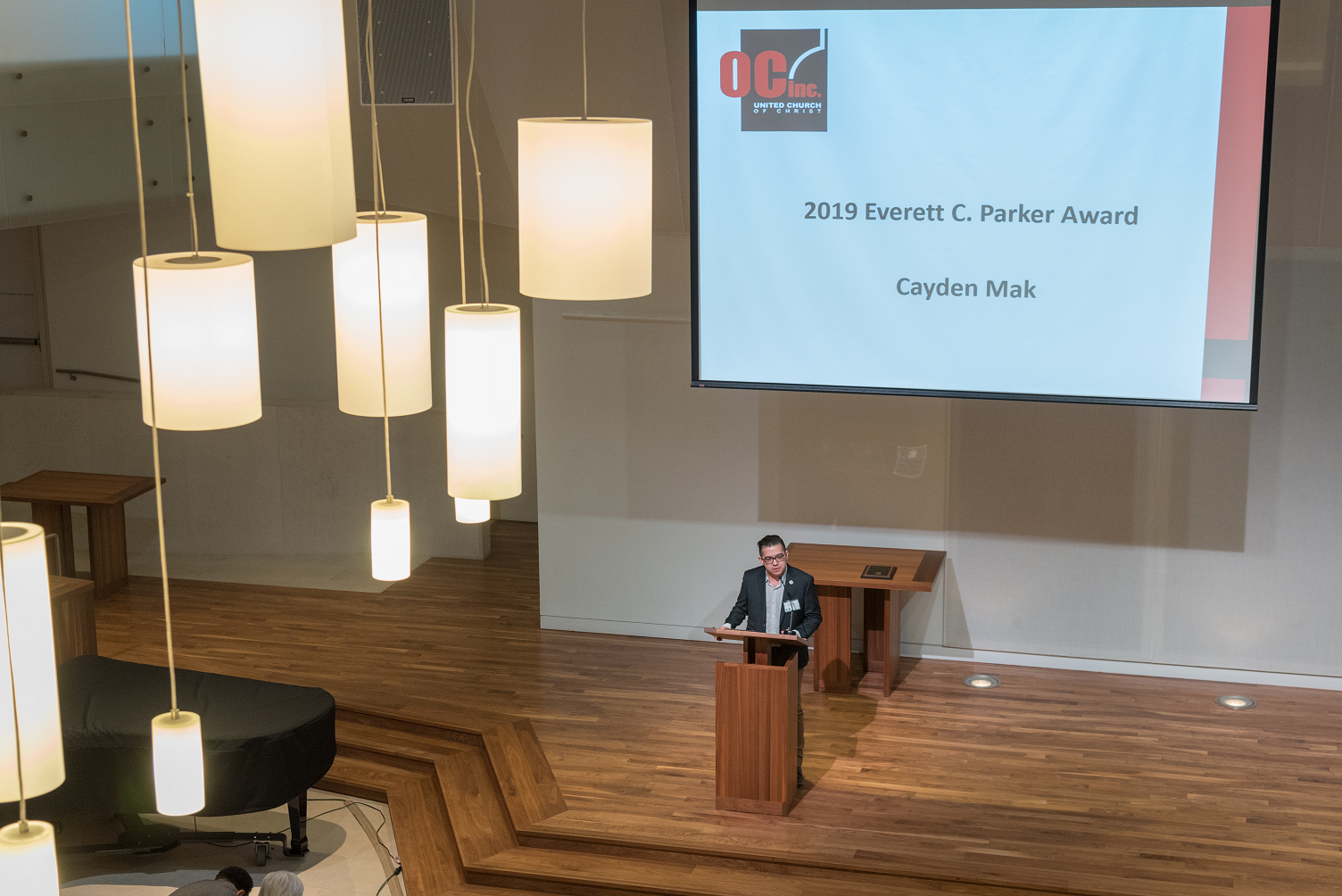 "Sankofa is what reminds embattled people, forgotten people, disinherited people who traverse a sky full of Big Birds – the Big Bird of xenophobia, the Big Bird of poverty, the Big Bird of corporatized education, militarized peacekeeping – Big Bird does not want you to have your story, because with your story comes your identity and with an anchored sense of being. No thing and no one can get in your way.

"Sankofa is our reminder that stories carry within them the power to make people and the power to remove them: the power of life and death."

DeShazier's message was underscored by the stories told by those who were recognized with awards at this year's event.

Cayden Mak, executive director of 18 Million Rising, an online organization that builds community in the Asian American and Pacific Islander community, received the Everett C. Parker Award in recognition of work to support greater public access to affordable and open broadband technologies. Mak described how as a queer youth, "the Internet saved my life." Growing up feeling "isolated and weird," the Internet enabled Mak to "find people like me."

"The social web has become a lot less social," Mak said, noting that before "the ideology," it embraced "the search for belonging." But there is still hope that "we can have an Internet built on care" and a technology that is "expansive not expensive." 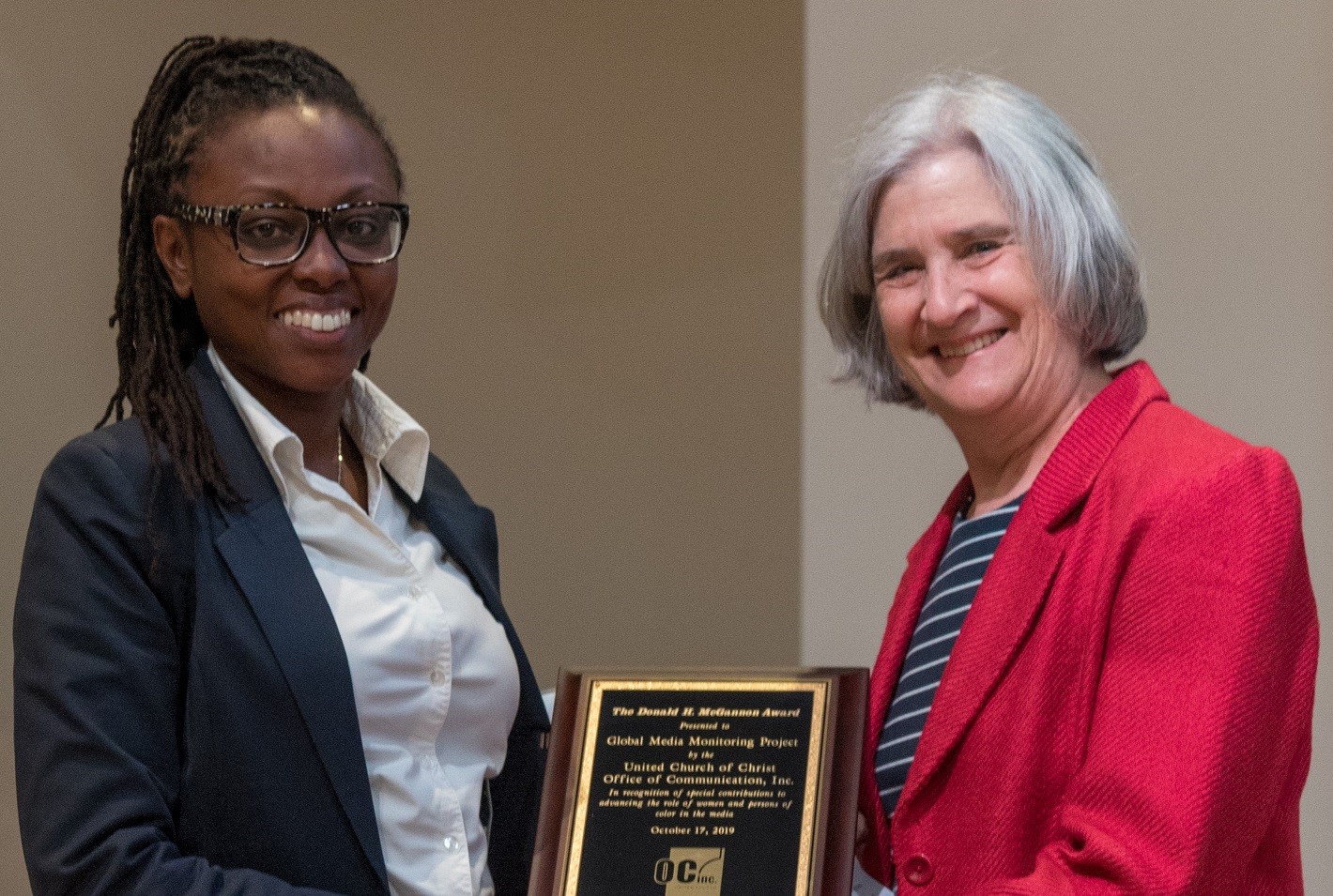 Sarah Macharia, global coordinator of the Global Media Monitoring Project, traveled from Kenya to accept the Donald H. McGannon Award on behalf of her organization. The McGannon award recognizes special contributions in advancing the role of women and persons of color in the media; the GMMP is the longest and largest longitudinal study of women in the media—both their presence and how they are covered—in the world. The project's next study, conducted at five-year intervals, will take place in 2020 and is expected to involve volunteers in 130 companies.

Macharia described how the project began in 1995, monitoring the media in 70 countries. The idea "was not an idle curiosity but came out of frustration over the media's seeming lack of respect for the integrity and dignity of women the world over."

"Think of the stream that becomes a river as tributaries merge into it, bringing life to the land through which it crosses," she said. "So it is with the GMMP, as more countries and tens of thousands of volunteers have joined in." The project is "three things in one: It is a research project, it is an action network and it is an activist movement."

Macharia noted that the project had determined that "out of every four people seen, heard or read about in the mainstream news media globally, only one is a woman. Based on the trends, we forecast it will take at least three quarters of a century to reach parity." The problem, she said, was "more or less identical the world over, whether in the USA, in Uruguay or in Uganda."

The event celebrated the 60th anniversary of OC Inc. Participants recalled how media monitoring was important to the early work of the Rev. Everett Parker, who founded OC Inc. in 1959. Parker organized volunteers to monitor television stations in the Deep South to demonstrate that they were failing to cover the local African-American community. In 1963, he filed a petition with the Federal Communications Commission that ultimately stripped WLBT-TV in Jackson, Miss., of its broadcast license. The court case also established the principle that the public could participate in matters before the agency, a principle that OC Inc. helped successfully defend, with other advocacy partners, in a federal appeals court case this past year.

OC Inc. created the Parker Lecture in 1983 to recognize its founder's pioneering work as an advocate for the public's rights in broadcasting.

Sara Fitzgerald, a member of Rock Spring Congregational United Church of Christ in Arlington, Va., is on the Board of Directors of the OC Inc. and is a regular newsroom volunteer at the UCC’s biennial General Synod.