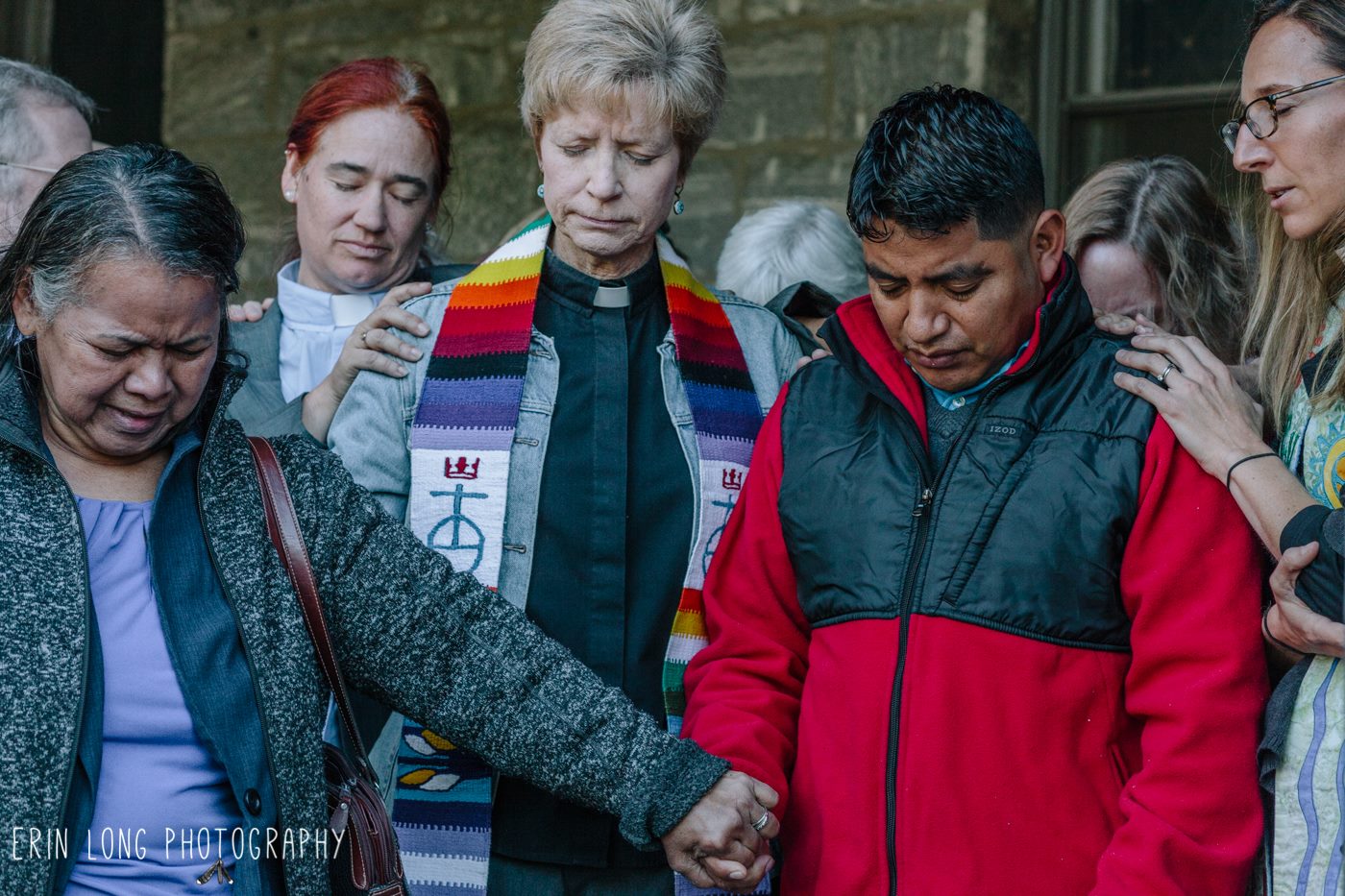 A United Church of Christ Immigrant Welcoming Congregation in western Massachusetts had studied sanctuary, but determined a host of obstacles were standing in the way of harboring a neighbor in need — until the church got a phone call that changed all that.

First Congregational Church, UCC, of Amherst, Mass. is offering sanctuary to Lucio Perez, a father of three U.S. citizens who has lived in this country for almost twenty years. The Rev. Vicki Kemper says keeping him here, allowing him to stay near his family as he petitions the government to reopen his case is one of the church's most important ministries.

"Lucio is a man of deep, deep faith, a leader of his Pentecostal church in Springfield Mass., 45 min. south of Amherst," said Kemper, pastor of First Congregational. "He needed to stay here with his family, but he wanted to play by the rules."

Instead of getting on a plane back to Guatemala Oct. 19, he was taken into sanctuary.

Perez came to the United States in 1999, and found work as a landscaper. His wife works in a factory and was given legal permission to work as part of her asylum petition. In 2009, he came to the attention of Immigration and Customs Enforcement (ICE) after he and his family stopped at a Dunkin Donuts. Perez went in to get a drink, his wife went in to use the bathroom. They came out to find police at their car.  After that, Perez started regular ICE check-ins and annual appeals for stays of deportation, which were granted – until this year.

At a check-in the second week of September, Perez was ordered to report to ICE on the following Thursday, Sept. 14, with an airline ticket to Guatemala. He would be fitted with an ankle bracelet at that time, which would be removed at the airport before he boarded the plane. He decided to keep that appointment, showed ICE agents a ticket for Oct. 19, and, Kemper said, did a lot of praying afterward to decide what to do. Agents visited his home, so he would know they were monitoring his location at all times. When he learned his last-minute stay had been denied, Perez took sanctuary at First Congregational.

The Amherst church had to move quickly to find a way to offer Lucio protection, calling an emergency meeting after Perez's September check in. In a few hours, amid much emotion, members reviewed their options — and while they were not sure about the process, the speed of action required, and all they didn't know — including Perez — Kemper said they had one clear choice.

"People's hearts were aching for this man," Kemper said. "They knew just a tiny bit of his story, and their hearts were broken open. Being aware of the risks, despite the circumstances, we decided to step out on faith and offer him sanctuary."

The church is now working to overcome the issues that make the situation more challenging. Like no shower facilities, a soup kitchen that operates three times a week, and other programs that bring people in and out of the building almost constantly.

"One of our biggest challenges is security," Kemper said. "Providing this ministry to him is forcing us to adapt all our other ministries in ways that are really challenging, but it's something we are doing."

"We've ordered a portable shower that he'll be using in accessible bathroom." she continued. "We hope it comes today or tomorrow. We've converted a meeting room into a living area for him."

As the congregation makes adjustments, so does the Perez family.

"Lucio is an amazing person of faith," Kemper said. "He, his wife and his children miss each other. The family is facing huge financial challenges since they lost one of their breadwinners. But the first night he was with us, a group gathered to pray with him and he led us. His prayer of faith, gratitude and of trust – I was left in tears. It's very much a journey we are all taking together."

One that church members and other faith groups have joyfully joined.

"The response we are getting, both from the people in the congregation and other faith communities is overwhelming and inspiring," Kemper said. "Fifteen church members are committed to the day-to-day practical details, making sure we are providing 24-7 accompaniment to Lucio."

A number of local religious leaders stood with Kemper on Oct. 19, as Perez was welcomed into sanctuary. And virtually everyone volunteered to support the UCC congregation.

"At a meeting Monday evening, Oct. 23, several other faith communities pledged their support, to get involved by helping with food. Eleven different congregations committed to providing a weeks' worth of dinners for Lucio. That is really huge and it accomplishes a couple things. It meets his need for sustenance and community. But it's also a way for faith groups that have not engaged in sanctuary to figure out what they may be called to do."

First Congregational has been discerning that call since President Trump started instituting travel bans last winter. With the new administration's emphasis on deporting undocumented immigrants, the church focused on caring for the stranger. In February, following messages from scripture and the UCC faith tradition, more than a dozen members formed a sanctuary ministry team. They got involved in rapid response networks, learning ways to respond to ICE raids.

On June 5, the church members overwhelmingly decided to declare themselves an Immigrant Welcoming Congregation, and lobbied locally to make Amherst a sanctuary town, an effort which passed.

Now Perez waits to see if ICE will reopen his case and cancel his order of removal. A process that generally takes 6-8 months.

"We will learn more and be blessed more by him than he by us," Kemper said. "At the same time, it's a very, very sad situation. These children do not have their father at home anymore and he's not able to provide for them as he would like to. We can't lose sight of the fact of the injustice and the sadness that is happening here."

First Congregational is the third UCC church to welcome a neighbor into sanctuary in October, the others being Christ Church UCC in Maplewood, Mo., and Umstead Park UCC in Raleigh, N.C.