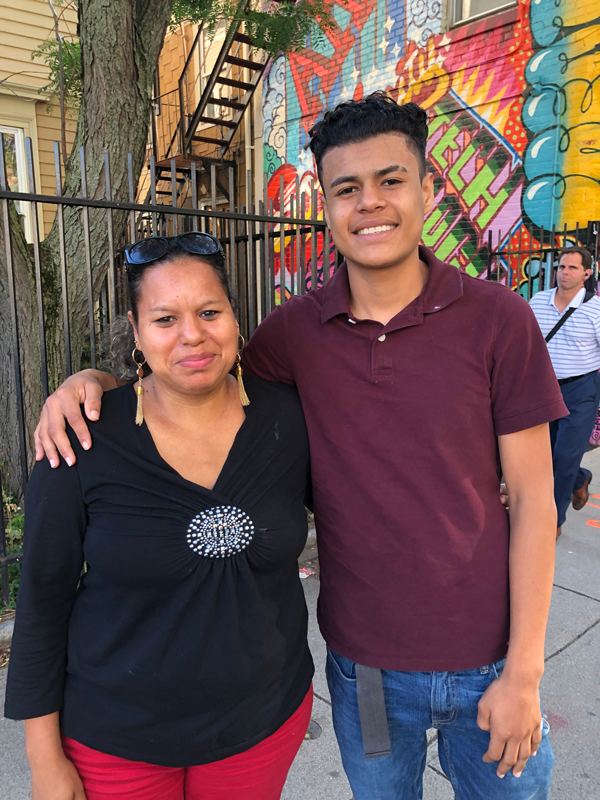 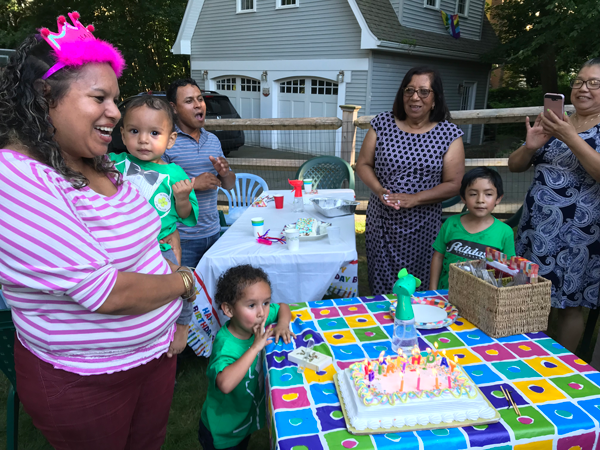 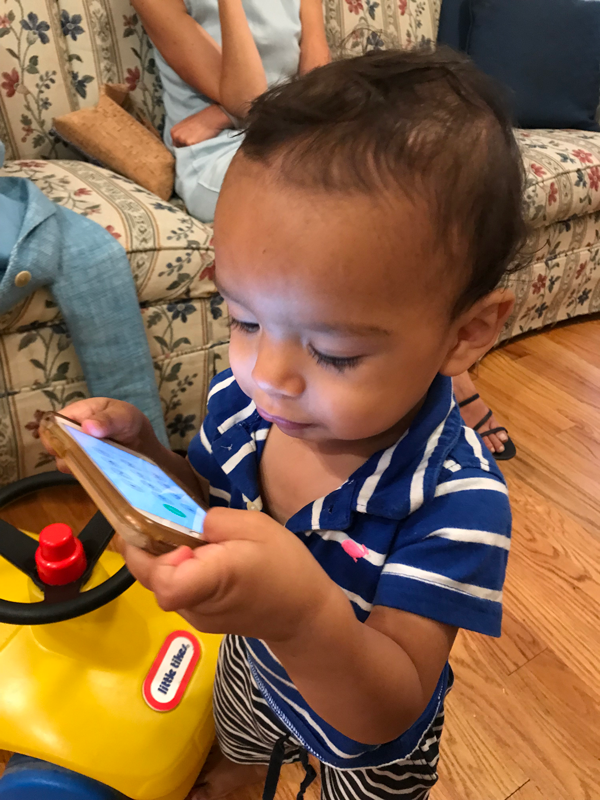 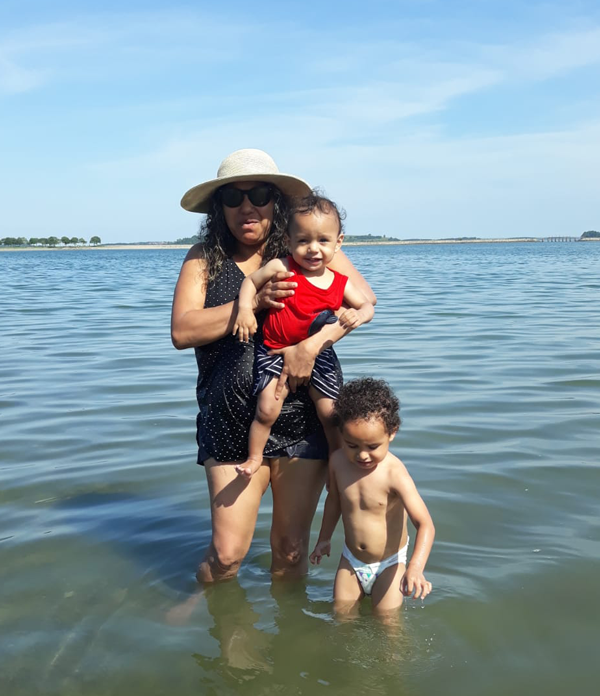 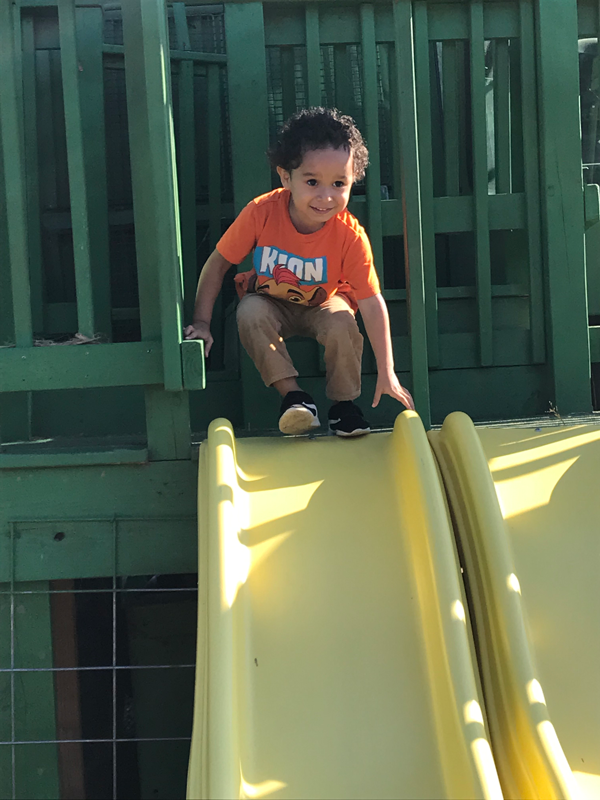 UCC immigration justice advocates in Massachusetts are putting their faith in action, supporting and accompanying a single mom from Honduras and her three sons sent to the Boston area from Arizona.

It's been a year since the Rev. Randy Mayer, pastor of Good Shepherd United Church of Christ in Sahuarita, Ariz., reached out to Marge Roberson and Myriam Hernandez Jennings, members of First Church Natick, UCC, with an unusual request. Could their faith community take in an asylum seeker and her three boys who needed help resettling in the United States?

Marge and Myriam had participated in an immersion experience at the border that August of 2018, hosted by Good Shepherd and the Southwest Conference UCC. The women had an opportunity to meet migrant families and learn about the circumstances that forced them to flee their homes in search of a better life.

"They (Good Shepherd UCC) were hoping to bring a mom, a 3-year-old, a baby and 17-year-old to the Boston area," Roberson said. "Boston has a much better success rate with asylum cases than Arizona, so they felt it was their best chance to get their asylum claim granted. This is one of the families that spoke to us when we were in Arizona."

Jane Bergen got involved when she went to a presentation at the United Church in Walpole, given by other members of her church who took that trip to the border to witness what was happening.

"I was very moved by what they said and their discussion of meeting Maria and her family," Bergen said. "I am so upset about the direction of this country and its treatment of immigrants, I had to try to make a difference."

Roberson and other church members already had some experience in immigrant justice work, volunteering with the MetroWest Immigrant Solidarity Network (MISN). The group was established to accompany neighbors to court and later got involved in assisting migrant families. The resources and the network opportunities proved invaluable.

The First Church advocates assembled a core group of about two dozen people, from several local congregations and a synagogue, who agreed to help resettle the family the Arizona church was accompanying.

"With that in hand (and support of church leadership), we said yes. The family arrived the first week of January," Roberson said. "Maria, Diego, Javier and Juan traveled to Massachusetts to pursue their asylum claim. When they first arrived, they lived with a couple who opened their home to them."

MISN made it possible for them to meet other families from Guatemala, El Salvador and Honduras who were also resettling in the area. Through MISN, Maria started English as a second language classes and had a chance to make friends. Church volunteers got her 17-year-old son Javier enrolled in the local high school, which has a program from immigrants. Three-year-old Juan started pre-school three days a week, and baby Diego had Diego had a slew of babysitters available as he celebrated his first birthday.

But adjusting to a new life for this family and their allies hasn't been easy. In addition to adapting to new places and a new culture, asylum seekers must wait 150 days from the date they file with U.S. Customs and Immigration Service before they can apply to work. If their situation changes, the waiting period starts all over. Which meant Maria couldn't file for a work permit until sometime in August.

"It was a lot to coordinate the needs of this family as they initially were far away from services and public transportation. While in Arizona I attended a workshop by Randy about housing an asylum family. Even though I read the very thorough document he handed out, I was not prepared," Roberson said.

She acquired the necessary knowledge as she went, with the help of that village of volunteers from two UCC congregations, First Church Natick and United Church in Wapole, along with members of Eliot Church of Natick, affiliated with the both the UCC and the Unitarian Universalists; two other UU churches, First Parish in Wayland,  First Parish in Sherborn, and Temple Beth Elohim, Wellesley. They learned significant lessons quickly.

"It was important for us to remember that this family functions differently than we do in our own home," Roberson said. "This takes a great deal of flexibility."

Initially just getting Maria and the boys where they needed to go was challenging. That got easier in June, when the churches helped move the family into a two-bedroom apartment.

"The move to the apartment was instrumental in giving this family independence," Roberson said. "They are able to walk to the preschool that Juan attends, the medical clinic, social service agencies, pizza places and Dunkin Donuts. There is a local bus system that provides transportation to the mall and to groceries stores for $1.50 per ride. We are all still learning how to take advantage of that option but have made a couple of trips to test it out. They are also walking distance to the train to Boston, so that is the next big exploration."

Financing their living expenses has also been an ongoing challenge. Roberson said that they have raised $29,000 in the last year and have spent $25,000. In late October, First Church received a $1,000 asylum accompaniment grant from UCC Humanitarian and Development Ministries.

"They (First Church Natick) are doing a huge financial lift to support this family and really making it work by partnering with many other faith communities," said Amanda Sheldon, UCC Refugee Ministries program associate. "Our $1,000 grant is not much, but I know every bit helps, and it shows our churches that we are with them in this work."

Roberson said it's really heartening how generous people are. "Two individuals have committed to pre-school payments so that Juan can stay in a stable environment until he is ready to move into public school. It is kind of remarkable, actually. People keep giving money. They know it is going to someone who needs it."

"I worked with other members of our church to organize a fundraiser for them which raised almost $5,000," Bergen said. "This fall I asked several people to assist me in providing winter coats, hats and gloves for all four members of the family and delivered them to Maria a few weeks ago."

"Volunteers spend time raising money and donating. Rent, food, pre-school, school supplies, clothing all cost and prices in this area are high," Roberson said. "But somehow through a fundraising dance, yard sale, art sale, church offerings and individual donations, we have managed to raise the money to keep our commitment to this family strong."

Since they've come to Massachusetts, the family has found a spiritual home with a Spanish-speaking congregation and have been baptized.

But the family remains in the Immigration and Customs Enforcement deportation cycle. Diego was born in the U.S. and is a citizen. Maria and her older boys wait to be granted asylum. This summer their first hearing in front of an asylum officer did not go their way. While Maria's claim was denied, it was determined she could still have a credible fear case. The family is now scheduled to go before an immigration judge in May 2020 to plead its case.

"It is frustrating and maddening to watch a family have to always be on the edge of worry about their status and about their families and friends back in their own countries," Roberson said. "There really is nothing to do but to continue to take one day at a time and hope and pray that each new day brings a step forward in the process. The resilience and faith of this family is inspiring."

However, as Roberson also said, the family had good legal representation to help them through the process. The members of Good Shepherd UCC in Arizona are committed to paying for their lawyer. And their pastor stays connected.

"It has been amazing to see how the congregation in Massachusetts has adopted Maria and her family – Marge has been great," Mayer said. "I was able to stop by and check in with them last month. There are a couple of other families that we have been able to send out across the country to churches. I actually have a couple churches now that want to receive asylum families."

Maria and her sons now seem to be thriving in their new home. Maria has made many friends among folks from a variety of Latin American countries. She helps them get introduced to a nearby social service agency, food pantries and other support agencies.

Baby Diego is 1-and-a-half, mobile and talking. "It is hard to discern which language he is using so not quite able to make out words yet. He clearly says hello, thank you and mom," Roberson said. "He willingly stays with baby sitters as long as they play with him and give him undivided attention. He is 'reading' books, totally understanding that there are words on each page and a story to be told."

"Maria's English has improved immensely, as has Juan's and Javier's," Bergen said. "She is capable of navigating things on her own, like the grocery store, discovering wonderful donated clothes at the food pantry, asking questions, making friends. Juan has shown the most changes. He was such a scared unhappy boy when he came, crying and acting out. He is now happy, smiling, communicates easily in English, and functions well socially. He happily went off in my car with me to the Magic Show and easily talked to my grandson. He behaved at the show and had a great time. Javier has faced some challenges in the inability to work and his dislike of school. He is 17 and that might have something to do with it."

The family filed paperwork for work permits in October and were eligible as of Oct. 30 but are still awaiting that permission. Both mom and her eldest son are frustrated by the wait. Javier is doing yard work and Maria baby-sits for spending money and to help contribute to their living expenses.

Roberson is grateful for the volunteers who continue to provide transportation, baby-sitting, runs to the food pantries and grocery stores. "They also provide companionship, taking the family to the beach, apple picking, a magic show and inviting them to dinner," she said. "This is an invaluable aspect of their support. There are many people available at a moment's notice for emergencies or just to text or call. And more people are asking to help as they hear of what their friends are doing."

"I was naïve when I first got involved. I had no idea how much time, money and emotion would be involved in this effort," Bergen said. "Marge has done an incredible job coordinating things and helping them. We could have used a better understanding of what they would need and how long the need would last. I am so impressed with Maria. She is a wonderful person who never complains despite the issues she faces. She always says, 'Stay positive.' I have learned a lot from her example and wish I could do even more."

"People need a safe place to be, and it's our responsibility to offer them kindness and safety and a home where they feel welcome. People are coming here because they need somewhere safe to be. Welcoming the stranger, taking care of people and helping others – if that's not what being a Christian is about then I don't want to be a Christian anymore," Roberson said. "If you follow the example of Christ, it's an example of taking people in and caring for them, so as a Christian, I have to do that."