During the month of March, when Lent concludes with the celebration of the resurrection of Jesus Christ at Easter, the United Church of Christ will raise the voices of Israelis and Palestinians who seek peace and justice in the region where our Savior once walked. A pair of webinars and a resource guide will be available next month, highlighting the perspectives of denominational partners in Israel-Palestine. It's a way to encourage participants to advocate for an end to the hostilities in that part of the Middle East. 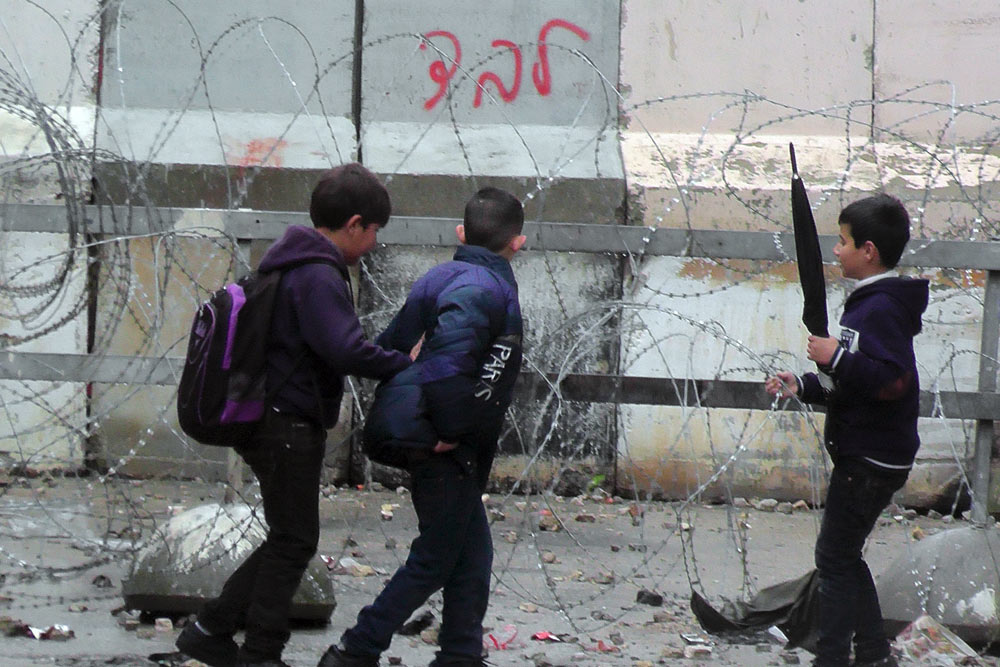 Children near a checkpoint in Hebron, West Bank. After the checkpoint was torched, the military does not allow Palestinians to cross it, further exacerbating the heavy restrictions in force on Palestinian residents of downtown Hebron. Photo by Manal al-Jaabari, B’Tselem.

"It's timely to focus on this topic, with March being the month of Lent and Easter, as the faith calendar focuses on Jerusalem," said Peter Makari, area executive for the Middle East and Europe for Global Ministries. "As Jesus Christ moves toward Jerusalem, so does our attention."

The two webinars, hosted by Global Ministries — the shared overseas ministry of the UCC and Christian Church (Disciples of Christ) — on March 14 and March 21, will offer narratives from among the range of Israeli opinions on the occupation, to the role that Palestinian Christians play in achieving peace in that part of the world.

"The United Church of Christ has long, historical relationships in Israel-Palestine and a deep commitment to justice for all," said the Rev. James Moos, executive minister of Wider Church Ministries. "We are thankful for the collaboration with both Israeli and Palestinian partners as, together, we seek to end the conflict. Through theses webinars, we amplify their voices."

The webinars, along with a FAQ guide about having honest and respectful dialogue about the Israeli-Palestinian conflict and a separate Bible study, are the third installment of the denomination's 2016 multimedia campaigns tied to its core mission. They also underscore the importance of the ongoing Middle East Initiative, kicked off at General Synod. Together, these resources encourage UCC members and local churches to learn more about Israel-Palestine and reflect about how they can engage the issue.

Hagai El-Ad, executive director of B'Tselem, is the presenter for the March 14 webinar (12 p.m. EST). B'Tselem is an Israeli organization that documents and reports on human rights in the occupied territories of the West Bank and Gaza. The Hebrew phrase B'Tselem means "In the image of" — a reference that all people are created in the image of God. El-Ad has said that "the fight against [the occupation] is more crucial than ever — a fight in which B'Tselem plays a major strategic role. There is no doubt in my mind that human rights cannot be upheld under an oppressive regime of ongoing occupation and dispossession."

"The biggest thing is this is an opportunity for churches to have direct interaction with our partners to hear about their work, and the context in which they do it," Makari said. "We hope it will be both educational and motivational for our churches to do something with the information, and that they are interested even more in the topic to support our partners, or engage in advocacy for peace in the region."

Register to participate in the March 14 webinar and the March 21 webinar on the Global Ministries website. Learn more about the UCC General Synod 2015 resolution that proposes a four-fold strategy to bring a just peace to the conflict.