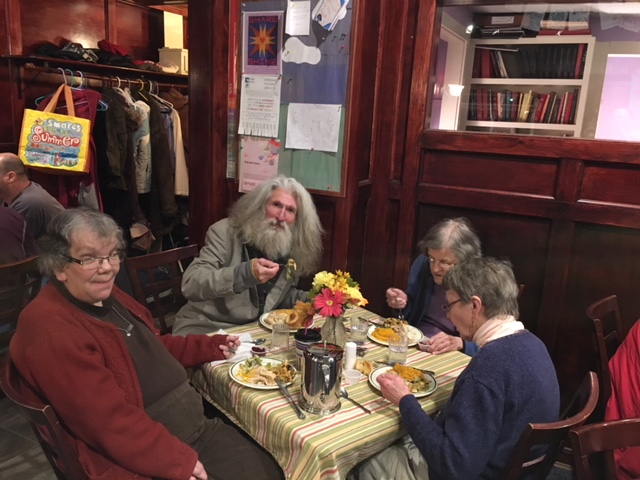 There is always room for everyone at the table at the Neighborhood Café in Bath, Maine.

"We do church on Tuesday and it looks like a restaurant," said the Rev. Bill Bliss, pastor of the Neighborhood United Church of Christ. "We call it the liturgy of hospitality."

The church, which has been in Bath since 1795, hosts a free meal every week with volunteers from the congregation and the wider community joining in to prepare it. The Café welcomes people from all walks of life, to serve each other. There's a designated chef, but that's the only assigned role — the rest of the crew — hosts, cooks, and a wait staff — just shows up and comes together.

"We open our doors Tuesday morning and invite people to come all day," Bliss said. The place offers a warm and safe space for coffee and conversation. "80-100 people dine every Tuesday night. It may be the best meal people get all day. We also encourage people to bring containers to take food home."

Neighborhood UCC started its liturgy of hospitality in 2010 at a former location, a large church facility on the outskirts of city of about 10,000 people. Known then as Bath United Church of Christ, the congregation changed its name a few years ago to reflect its current mission.

"We were hosting the food bank for our city, and we noticed that 50-60 people would come by when the food pantry was open," Bliss said. "They would come in looking forlorn to pick up the box, stand in line, get their food and leave looking forlorn. So we decided… we had a kitchen, and a large hall, why don't we start cooking some food?"

They started with a few pies on food pickup day. The idea morphed into the Café, which began almost eight years ago with a partnership with other faith groups and the local food pantry.

"We reached out to church folks beyond the churchy people," Bliss said. "Talked to folks from civic leaders to yoga instructors, said 'let's talk about creating a weekly free restaurant. Let's all do this together, in an inclusive group where everyone would be welcome.' The Café gave the church to people who were church allergic."

Initially a four-month experiment started in March of 2010, the concept that brought together teams of all types of people – a shopping team, a hospitality team and a cooking team – to craft a community meal. A dozen volunteers were turning out 70 meals a night. So after the other churches fell away, Bliss said Bath UCC reaffirmed its commitment to the ministry. 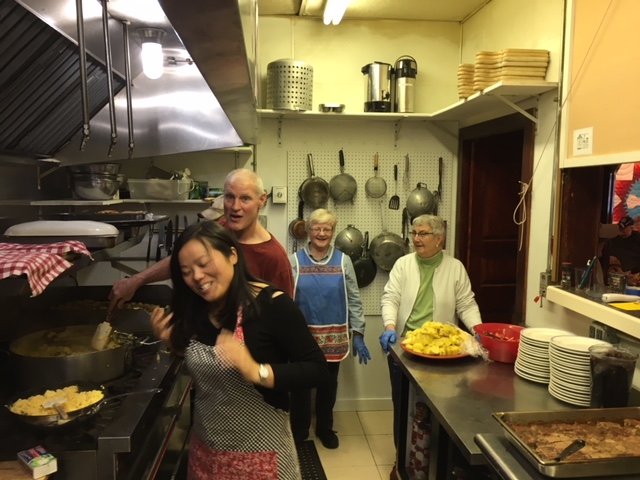 "We don't have to have people in the church community, anyone can come and participate," he said. "We are trying to leapfrog over the walls around a congregation. We conceive of ourselves to ministering to anyone and everyone. Leap over 'church allergy' and the assumptions people have about church. People can participate in something that feels good and connects them to neighbors. We tell them you are being the church. Bill it as a compassion thing, as a connecting thing."

In the spring of 2014, the UCC congregation, situated in a huge building away from the center of the city, began to discern where it should be located to be most effective. In June, the group decided to sell that structure and move downtown. After a successful sale in 2015, the congregation purchased a building in Bath that formerly housed a restaurant and turned it into the church. When the church needed to get a new sign, the name changed to Neighborhood UCC.

"One of the challenges of the Café was how to liturgize it, make it evident that it is being church without the limiting factor," Bliss continued. "The challenge of the church now is relevance, how does it matter to my life? Where is God in that? God is just connecting all sorts of different people. I notice that people of different political persuasions and ideological persuasions can sit at the same table and have a meal together, to talk about what they think and how they feel. It's interesting and inspiring."

The group which gathers for the meal on Tuesdays always connects with the divine, pausing between the appetizer and main course for a little prayer and a 90 second homily. A spiritual moment of reflection in wrapped around welcome and love.

Bliss said the Café attracts a wide range of neighbors on Tuesday, not just the indigent and the homeless members of the community. It's also drawn church partners (which they call themselves rather than members) to the Neighborhood UCC congregation.

"The main points in our week are Sunday am worship and the Tuesday Café," Bliss said. "It's interesting to watch those groups diverge and converge. Lots of people who come in for a meal ask about when we worship. We say 'right now' but come and join us on Sunday. It weaves a lot of variety into our congregation." 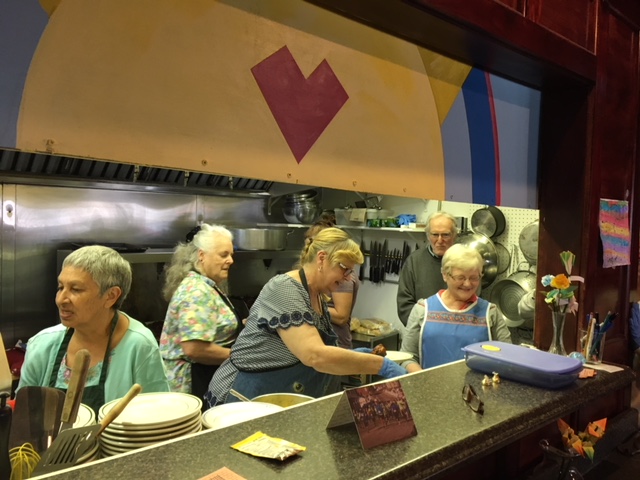 The Café does its own fundraising — organizers hold a fundraiser four times a year, and Café pays the church 1/7 of the overhead, since they use the church 1 day a week.

'It's really phenomenal on how it works well on little organization. All we sign up is a chef. We have a six person leadership team who do the budget and keep the larder organized. The miracle is people just show up Tuesday morning to do prep cooking at 10 am. Everyone else just filters in — people who volunteer for eight hours to prep, serve as sous chefs and clean up. We don't have to organize or schedule that."

For Christmas dinner, the Café served 130 people in a restaurant that only seats 65, with two turns of the dining room. A four course spread made up the menu — cheese and crackers, baked ham with an orange pineapple glaze, sweet potato casserole, green bean medley, a salad, bread pudding and chocolate cake.

"What really allows the Café to thrive is the core principle of the Café — there is no distinction between those who serve and those who are served," Bliss said. "We don't talk about staff or guests, to avoid the trap of being paternalistic. If people ask if we need any help, the response is 'sure what do you like to do?' It's a very permissive, giving type of atmosphere."

Ask the folks in the room, many who say they are present every Tuesday, about why they return week after week? One talked about the general good feeling you get by just being there. Others mention the opportunity to connect with others, warm feelings and fellowship, a tremendous meal, delicious food, wonderful people and extravagant welcome.

As one of the volunteers so simply put it, "I come to the Neighborhood Café to do God's work."