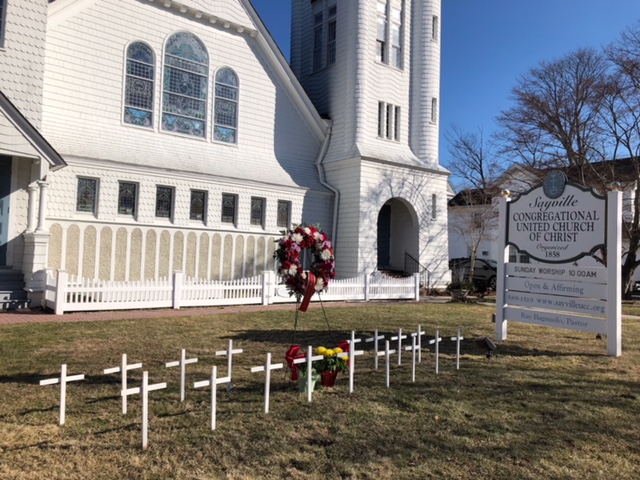 A UCC congregation in Sayville, N.Y., has set up a visual memorial to the victims of the Parkland, Fla., school shooting and is offering to help other faith groups do the same.

Sayville Congregational United Church of Christ assembled 17 crosses on its lawn during worship on Sunday, Feb. 18, to honor the students and teachers slain at Marjory Stoneman Douglas High School on Ash Wednesday.

"We created a wreath, and put a banner on it that reads, 'Parkland in our prayers, on our hearts,'" said the Rev. Ray Bagnuolo, pastor of the church on Long Island. "We brought out some of the crosses we've saved. If nothing else, our display keeps the conversation (about gun violence prevention) alive in a visual way. So folks who pass by have a moment to remember, pray and perhaps think about what they can do going forward."

The church has more than 650 crosses in storage, because this type of memorial to lives lost to gun violence is something Sayville congregants have been moved to create before. In December 2015, the third anniversary of the Sandy Hook Elementary School shootings, church members assembled a huge display to represent the number of cities across the country where people died in shootings since the massacre in Newtown, Conn., in 2012.

On Wednesday, Feb. 21, the church shared a number of those crosses with neighbors, a nearby congregation, and planned to add to the crosses and flowers currently planted on its lawn.

"After a picture of the display ran in the local paper, we got calls taking us up on our offer to share our crosses. I also took a call from some of our Jewish friends who pointed out that at least six of the victims were of the Jewish faith," said Bagnuolo. "We are now having six Stars of David being created by a member of our congregation to honor those victims. We want to be inclusive." Those stars are being painted, he said, and should go up today.

And after Bagnuolo talked to a representative of The Community Church of Syosett, he made arrangements to get that congregation 17 crosses so it could construct a similar memorial. 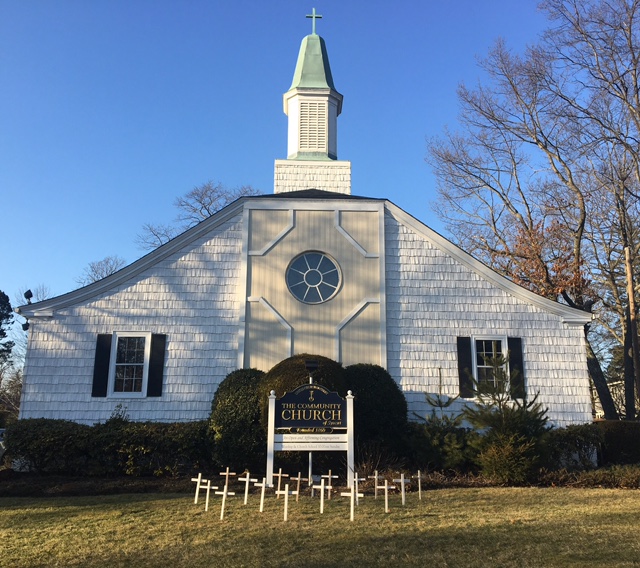 Lauren Chabina and Diane and Tony Matalas, members of the UCC church about 30 miles away, went to Sayville to pick them up. It's something Chabina said they were called to do.

Their small congregation is working through a lot of transition right now, she mentioned. Community Church just lost its pastor to retirement last week, and others in the aging congregation are facing health challenges. Chabina and her friends thought that this type of memorial might help. After checking with the church board president, who thought it was a great idea, the team stepped out on faith to make it happen.

"It’s 75 degrees on Long Island today, the ground isn’t completely frozen, we saw the article in the paper and decided to go for it," Chabina said. "Our church has been sort of down and out, and we are trying to face outward. Diane and I had been talking about ways to do that, the need to look outward, reach out, and maybe this is what God meant. We knew we wanted to stand with the Sayville church and honor the victims of one more horrific shooting. It was also good speaking to the people in Sayville; great meeting people of another church who feel the way we do."

"We all get that thoughts and prayers are not enough," Pastor Bagnuolo said. "But if you turn to God in times like these, many people are led to action. Need to lead us to what comes next. It can’t bring those kids back, but we can lean in and take this forward. I agree with the kids (of Stoneman Douglas High). This can be the last mass shooting."

Bagnuolo said he plans help the youth of his church reach out to those student advocates.

"Our young people want to use social media to connect with Parkland students to help them take this movement forward," he said. "To connect with them, and support them anyway they can. They are now on spring break, but when they come back, we are having a meeting and each of our youth will bring one or two friends. We hope to set up an interactive conversation to get the kids engaged."

"All of us have to make sure that nothing like that happens to anyone ever again."