Living out radical hospitality with a welcome for newly nationalized U.S. citizens 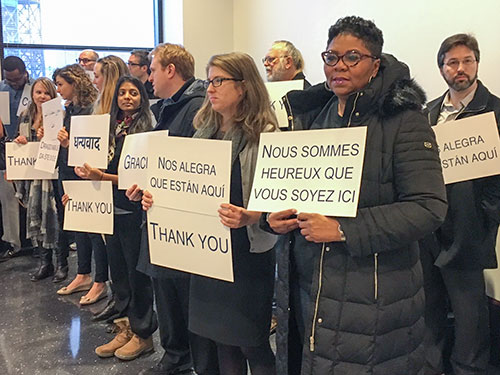 On his third day on the job with the UCC national offices, the Rev. Andrew DeBraber took an early morning walk over to the Federal Courthouse in Cleveland to offer an extravagant welcome to eighty newly nationalized citizens of the United States.

DeBraber, joined by colleague the Rev. Traci Blackmon, was one of a few dozen people who came out to acknowledge the new Americans with signs that said 'welcome' and 'thank you' in their native languages. Ethopia, Cameroon, Iraq, France, Canada, Colombia and Greece among the twenty countries represented in the ceremony today.

"At a time in our country when the welcome of immigrants is being compromised at the highest levels, this event seemed like one small step I could take in making a difference," said DeBraber, who works for the UCC Office of Philanthropy and Stewardship. "I joined the UCC national staff because the extravagant welcome has been extended to me over the years in a variety of local church settings and because radical hospitality is at the core of who I am. I am delighted to be a part of a church whose stated mission is to welcome all, love all, and seek justice for all. For me, it doesn't get any better than that." 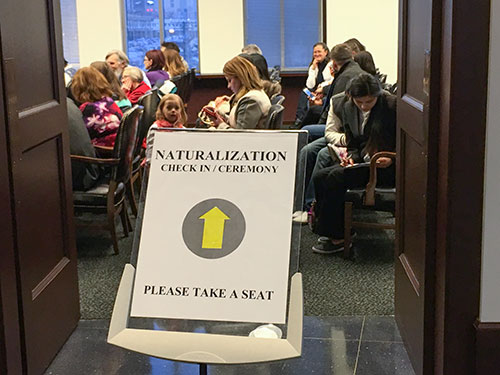 DeBraber is in Cleveland for the first ten days of February becoming oriented to his new role as Major Gifts Officer for the Western United States. On Friday, Feb. 3, he stood as a public witness with others in a show of support for the newly naturalized American citizens during a ceremony presided over by U.S District Court Judge James Gwin. Most of the people taking the oath of allegiance today had to be lawful permanent residents of the United States for five years, undergo an extensive application process with a background check, and complete a personal interview with a civics quiz. To become a U.S. citizen, one has to pass a test on American history, answering 10 random questions from a list of 100.

"As I walked over today, I remembered my great-grandparents migrating here from the Netherlands," DeBraber said. "I remembered the stories of immigrants I knew at my last position as Executive Director & Pastor of Heartside Ministry, an organization walking alongside people living with homelessness and extreme poverty. I remembered the stories of the students my wife teaches at an industrial sewing training program back in Grand Rapids, Mich. Even though the wind was whipping, the thermometer read 20 degrees and the sidewalks were ice covered and slippery, my 12-minute walk through downtown Cleveland was nothing compared to what many of the 200 or so people gathered at the courthouse to become citizens have had to endure – and what so many endure all day every day."