The Cleveland Indians professional baseball team is bumping the Chief Wahoo logo down in its batting order, acknowledging that the image will be the team's secondary logo this year. While the move is an important step for the dignity of Native Americans, racial justice advocates in the United Church of Christ want the caricature out of the lineup altogether.

"I have been coming to Cleveland for decades, since long before I became a resident," said the Rev. John C. Dorhauer, UCC general minister and president. "I have often been a part of protests to the 'Chief Wahoo' logo. I am certainly pleased to hear that the Cleveland organization has decided not to use this anymore as its primary logo. It is a step in the direction of justice and away from its discriminatory legacy. But it is not a just decision. Until they eliminate Chief Wahoo from their entire repertoire of logos, they will be seen as racist."

As the players take to the field during the home opener on Tuesday, April 5, the logo — a cartoon image of a Native American, some variation of which has been used by the Major League Baseball franchise since the late 1940s — will be visible only on the jersey sleeve.

"As long as they have the name 'Indians', it does not change," said Clements. “The fans will still make a mockery of what Native Americans have made sacred. The name still demeans native people everywhere. It's all a ploy by the ownership. What we need is a name that does not depict a race of people."

As she has done for the last two-plus decades, Clements and about two dozen other people were outside the ballpark on opening day, braving cold weather, marching and calling for justice. The denomination has been visibly present in these protests since moving to downtown Cleveland. 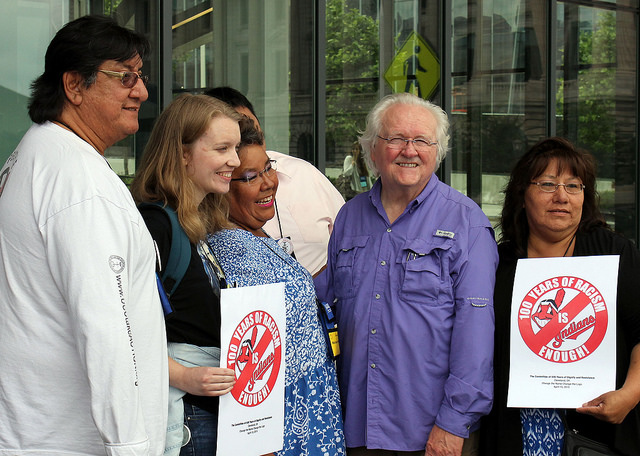 In 1991, the UCC General Synod passed a resolution calling upon church members to work for the elimination of negative stereotyping of Native Americans and the use of Native American imagery for sports team mascots, names and logos. In the summer of 2015, General Synod attendees delivered 3,000 petitions to the baseball team and City of Cleveland calling for a change of the Cleveland franchise's mascot and name.

The team has used the name “Indians" since 1915. The ball club has slowly phased out usage of the logo in recent years, removing it from the road caps in 2011 and from the batting helmet in 2013 in favor of a block-lettered "C".

However, the logo remains on the sleeve of the team's home jerseys, and franchise owner Paul Dolan told the local newspaper, The Cleveland Plain Dealer, that it is part the team's identity.

"(We have) no plans to get rid of Chief Wahoo," Dolan said. "It is part of our history and legacy… We do have empathy for those who take issue with it. We have minimized the use of it and we'll continue to do what we think is appropriate."

Said Dorhauer, "That we will see less of this racist logo matters. That they lack the courage to eradicate it also matters."