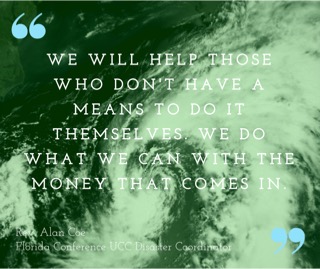 United Church of Disaster Ministries teams are reaching out to pastors and congregations across the entire peninsula of South Florida, as all involved try to assess the damage left behind by Hurricane Irma.

The job is being made more difficult by chaos created by the ferocious winds, driving rains and surging waters of the hurricane, which made landfall twice on Sunday along the Gulf Coast as a powerful Category 4 storm. Downed power lines, uprooted trees and lingering flood-waters present challenging conditions to the first responders. Almost six million people across the state remain without power.

"Power might be at a premium for a while," said the Rev. Alan Coe, UCC Florida Conference disaster coordinator. "200,000 people in Collier County are without power in the Naples, Marco Island area, and there's a boil-water alert. They will have to rebuild the electrical system. 170,000 people in Lee County are without power – including the cities of Fort Myers, and Bonita Springs. Crews are going out doing assessments, how they can get power on to most people the fastest. It’s a waiting game."

"All the communities in the path are struggling with power issues," Coe continued. "There is no gas — but once it is delivered, the stations will need power to pump fuel. After Hurricane Wilma, in 2016, some of the church folks said power was out for eight days, and this is worse than that."

Coe, who with his wife left his home in Naples and rode out the storm with friends in Bonita Springs who have a generator, was almost certain their place would be flooded. He was hoping to get by there today, to check it out.

"We dodged a bullet with the storm surge, when the hurricane went back into the gulf — that was a relief for the whole county. When we were getting ready, packing up to come over here, we were moving things up to higher ground. We expected to get flooded."

He is also hoping to get by to check on his church, Mayflower Congregational UCC in Naples.

Then, he said, once some of the obstacles hampering rescue efforts have been handled, and the millions of displaced Floridians begin returning to their homes, the UCC Disaster Ministries team can make some initial assessments and long-term recovery work can begin.

"Our denomination helps those nobody else is going to help. That process takes time to identify," Coe said. "After Hurricane Katrina, we were able to be there a couple months after the storm. We will help those who don’t have the means to do it themselves. We do what we can with the money that comes in for recovery efforts."

The United Church of Christ launched an appeal for Hurricane Irma just before the storm hit, and has collected $2,000 as of this morning. One hundred percent of all gifts are going to disaster recovery in Florida and in the Caribbean.

As of Monday, Sept. 11, seven people in the U.S. have been killed by the storm, with 37 more fatalities in the Caribbean.

Irma has now been downgraded to a tropical storm, but continues to cause flooding in South Carolina. For updates on Irma, bookmark the Disaster Ministries webpage http://www.ucc.org/disaster_hurricane_2017_relief for more information as it comes in from UCC churches around the area.