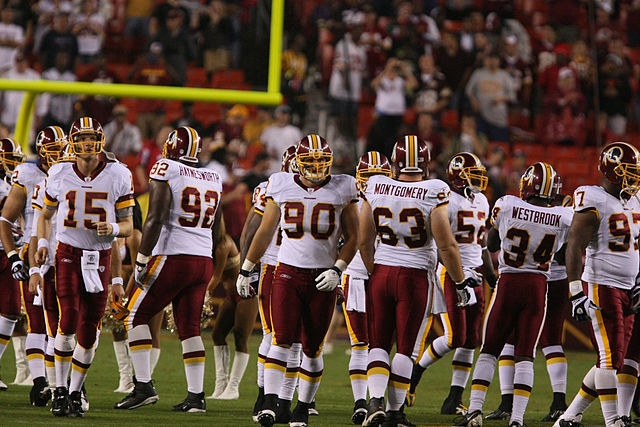 When the city of Washington D.C.'s NFL team travels to London to play a football game in late October, the United Church of Christ's call for the franchise to change its racially demeaning name and imagery will follow the team across the Atlantic Ocean.

Responding to the UCC's message, the United Reformed Church in the United Kingdom is expressing solidarity with Native American communities, addressing the racially-demeaning nickname of D.C's NFL team. The team plays against the Cincinnati Bengals on Oct. 30 at Wembley Stadium. The URC is urging British media not to air the game to prevent any acts of racial discrimination, or offensive language and imagery in sport.

The Rev. James Moos, an UCC national officer, said that he and his colleagues are expressing "deep appreciation to our partners in the United Reformed Church for its witness for racial justice and strong call for the elimination of racially offensive names and imagery in sports, including Washington's NFL team. Racism is a global injustice but I give thanks that, as global partners, we can stand in solidarity with each other as we seek God's beloved community."

The URC has written open letters to NFL UK, BBC Sport (the television network that will broadcast the game) and Wembley Stadium outlining concerns that the Washington team has yet to change its name, and that the game will be played at Wembley. At least one NFL game has been played in the stadium since 2007, but this will be the first trip to London for the Washington team.

"As a denomination committed to racial justice, we therefore expressed our deep concern for this upcoming game and called on the sporting bodies to be mindful of their own rules and commitments to human rights and to therefore take necessary action," said the Rev. Michael Jagessar, URC secretary for global and intercultural ministries.

"The use of racist imagery, language and stereotyping is an affront to all that makes us human, undermines the dignity and human rights of fellow human beings, and negatively impacts upon self-image, self-awareness and self-esteem," said the Rev. John Proctor, URC general secretary.

The General Synod of the UCC called on the NFL team, which has played in Washington since 1937, to change its name and logo during the 2015 biennial gathering in Cleveland. A resolution, proposed by the Central Atlantic Conference of the UCC, also called on UCC members and settings to boycott all of the team's games and team merchandise bearing the nickname and logo until they are changed. Even members of the British Parliament asked the NFL last February to force the team to change its name or send another franchise to play in the Oct. 30 game.

"There has been a long-standing campaign here in the U.S. to bring an end to the use of team mascots and team names that relate, and even degrade, the lives of the Native American peoples. The United Church of Christ has a long history and participation [in the campaign]," said the Rev. Karen Georgia A. Thompson, UCC ecumenical officer. "These team names are racist and insulting to the Native American community."