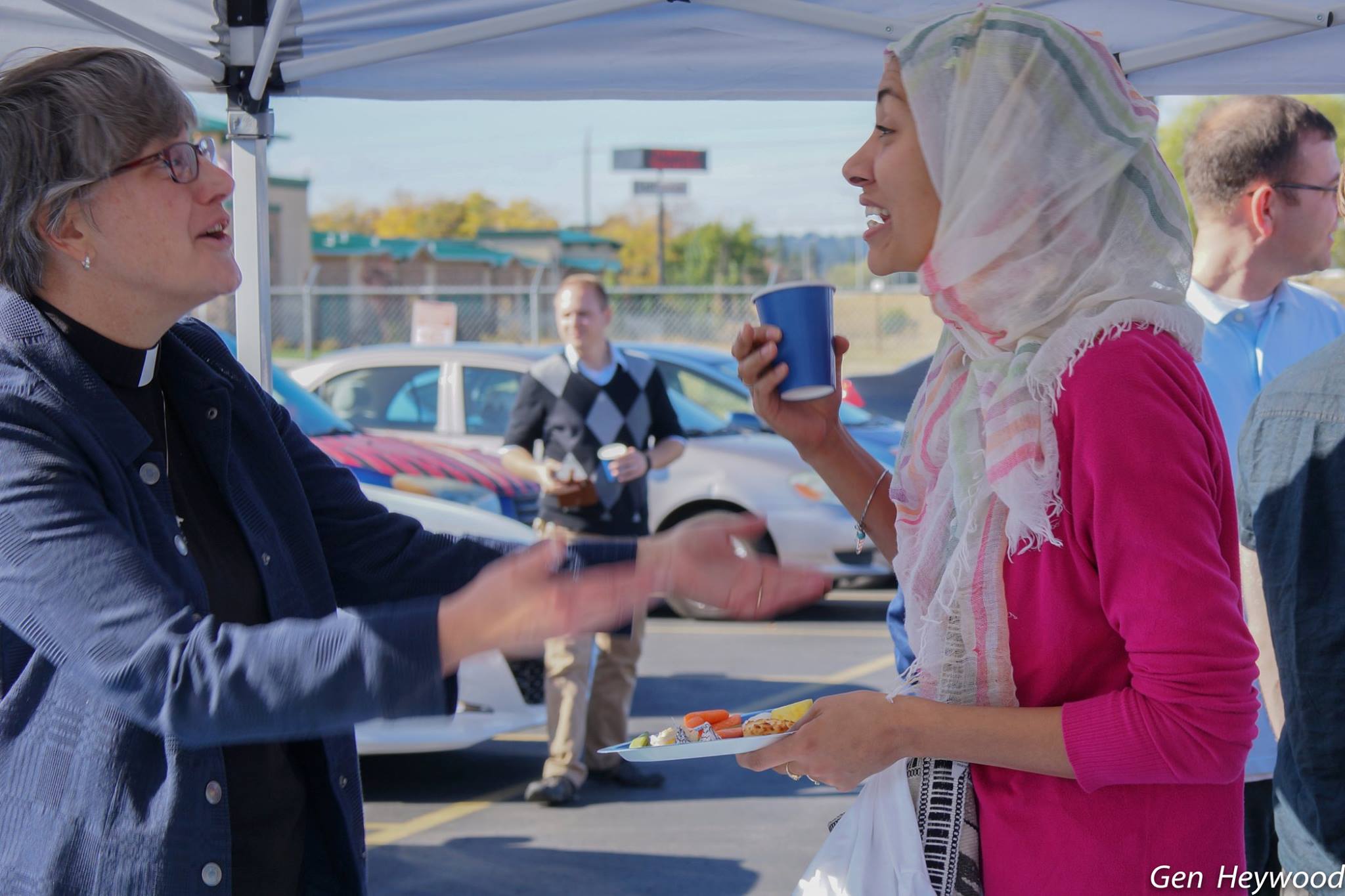 Three United Church of Christ pastors showed up on Saturday planning to stand with interfaith colleagues in opposition to what were noted to be two of 20 anti-Muslim protests across the United States. In both cases, in Spokane and in Bremerton, Wash., the publicized “Global Rally for Humanity” protestors didn’t show. Instead, a good time was had by all in attendance.

“The atmosphere was like a party, and the [Spokane] Islamic Center was doors open and welcoming to anyone who wanted to take a tour of the inside,” said Pastor Jan Shannon, the assistant pastor of Westminster UCC in Spokane. “Everyone at the rally was smiling and so friendly, no sense of fear or intimidation.”

In fact, Shannon noted that at the Sat., Oct. 10 gathering, there was a full spread of food, including cake for dessert, all provided by the Spokane Islamic Center and the Bosnia and Herzegovina Heritage Association of Spokane. The event, “Meet the Neighbors,” organized by the Spokane Interfaith Council, drew more than 100 people, including Shannon, the Rev. Genevieve Heywood, pastor of Veradale UCC in Spokane Valley, and several other UCC members.

“The nine people of Veradale UCC gathered in solidarity and celebration with our neighbors at the Islamic Community Center because we take seriously our stand as an Open and Affirming congregation,” said Heywood. “We went to gain friendships and understanding. We gathered knowing that there are people even here in Spokane who are so blinded by their fear they have become bullies to our neighbors. We needed to be there as a witness to the humanity in both those acting in hate and those enduring hate.”

“I was struck by the difference between what some media channels portray of the Muslim community and the ‘differences’ between ‘us and them,’ and the very casual, friendly atmosphere at the rally,” said Shannon. “There were no differences: moms chased kids, men talked sports, and everyone ate together. Except for the few hijabs there, you could not tell who was Muslim and who was ‘anything else.’ We were all just people together on a beautiful Pacific Northwest day, enjoying each others’ company.” 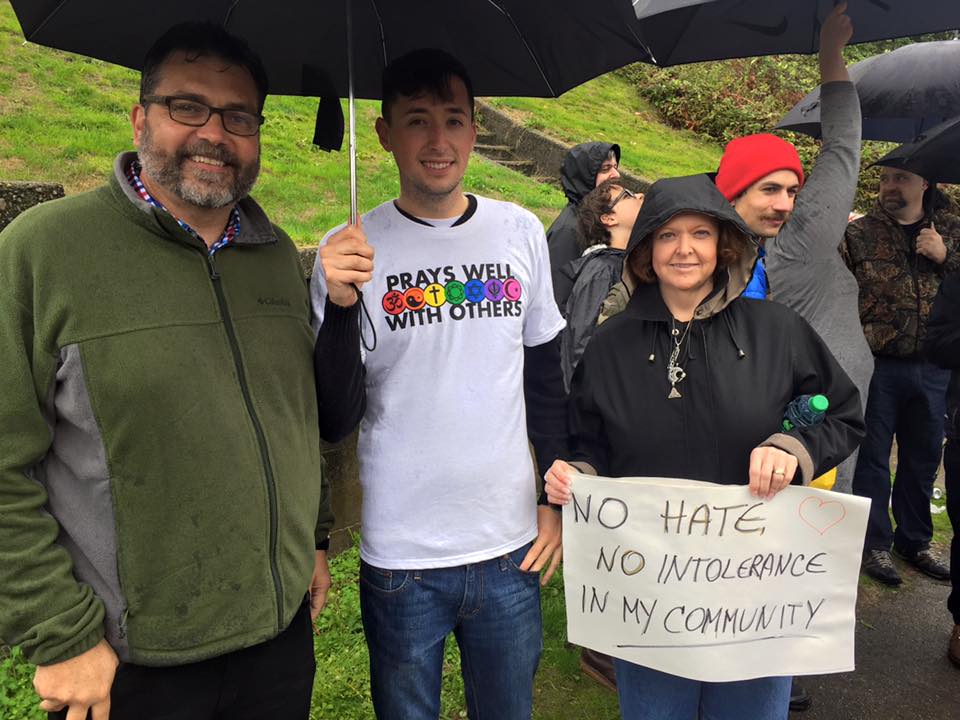 At another location of a publicized anti-Islamic rally in the Pacific Northwest, the weather wasn’t so nice, but those gathered had a good time getting to know each other. No protestors at this site either, but UCC minister the Rev. Eric Elnes was one of a few dozen people who showed up in Bremerton, Wash, ninety minutes outside of Seattle, to show solidarity for the Muslim community.

“When I arrived with a friend at the address listed by the Global Rally for Humanity, we found a church there, not a mosque. Turns out the mosque had moved over a year ago! Just what kind of effort did these Global Rally for Humanity folks put into this event, anyway? In fact, no protesters ever showed up to the protest –– either here or at the actual mosque,” said Elnes. “Instead, 41 of us from a wide variety of faith traditions, from Christians to pagans, turned out to stand in the pouring rain to show our support of the Muslim community –– many of whom had driven up to two hours for the privilege.”

Elnes, senior pastor of Countryside Community Church UCC, of Omaha, Neb. –– in the area on a book tour –– thought there was something not right at the start, when the protests were announced to the media last week.

“I realized something was not right when I typed www.globalrallyforhumanity.com into my web browser and found that this web address did not exist. Nor did the .org, .net, or .info versions. How does any organization hosting a national rally not have their own web domain?! No matter,” Elnes wrote in the Huffington Post. “I bought those web domains and re-directed them here: www.trifaith.org.” The re-direct links to an interfaith partnership in Nebraska between Elnes’ UCC church, Temple Israel, a Reform Jewish congregation, and the American Muslim Institute, which is building a mosque and cultural center. 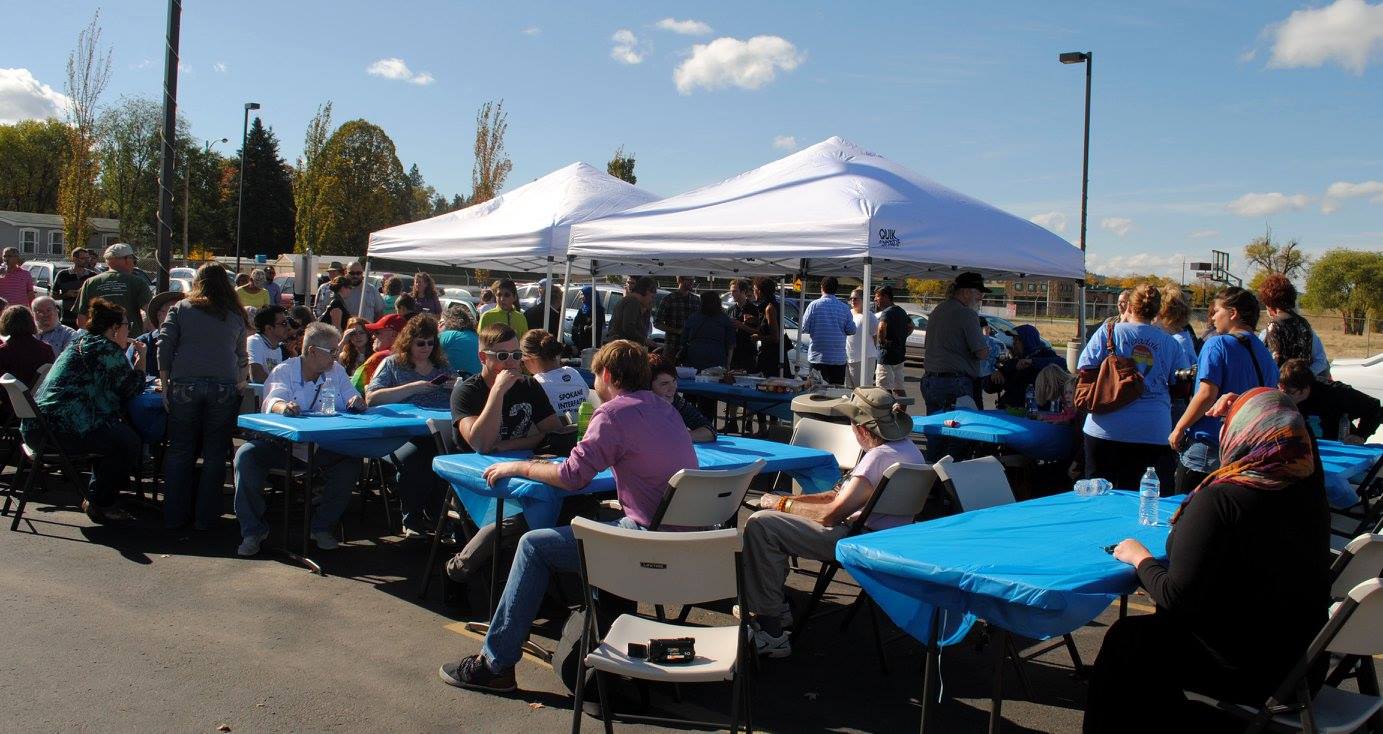 Bremerton was not the only place where the Global Rally for Humanity failed to attract so much as a single protester. According to Twitter feeds (#‎HateUnchecked), no one showed up at rallies in Georgia, Illinois, or New Jersey. The media and the police outnumbered protestors at the Dearborn, Mich., event. Checking the news feeds today, very few seem to have shown up anywhere but Arizona.

At the Spokane event, one of the speakers was Spokane County Sheriff Ozzie Knezovich, who noted, “There are some who think they are upholding the Constitution by trying to limits the rights of others. I say to them, if you really want to uphold the Constitution, you should be here!"

Shannon said the sheriff got a huge round of applause for that line. “It really was that kind of day –– tons of smiles and plenty of acceptance and tolerance for all,” she said. “I am so proud of Spokane's interfaith community, and it goes without saying that I LOVE being a UCC pastor and am blessed by my denomination's strong efforts to unite across faith lines.”