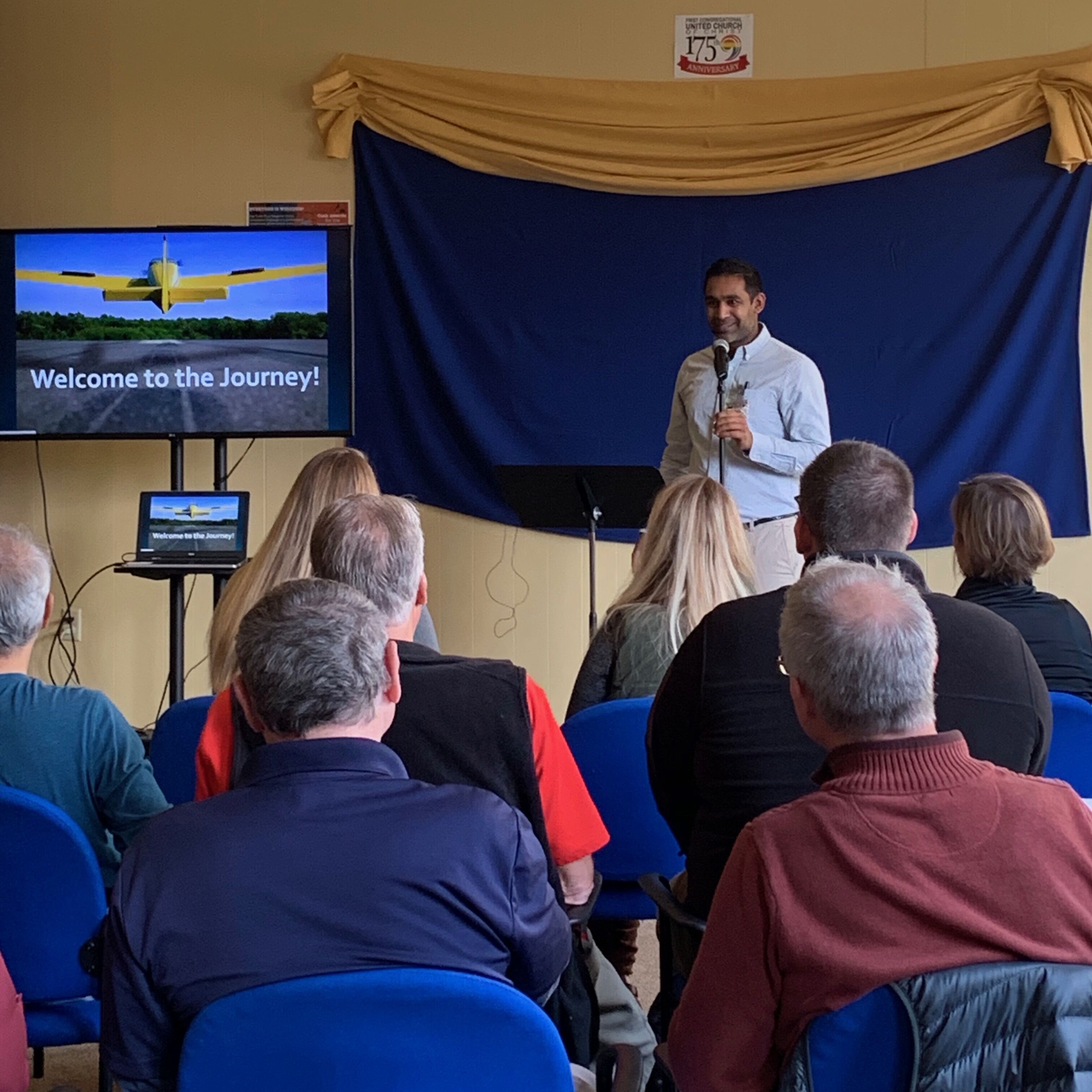 Entrepreneurs came to First Congregational United Church of Christ in Janesville, Wis., and found soil for their seeds of community hope on Saturday, Oct. 19, during a Love Your Neighbor Social Innovation Challenge – something its local, Conference and national organizers hope will spread throughout the UCC.

The Challenge was a little like the TV show Shark Tank, but with a UCC Three Great Loves heart, a democratic spirit, and a mission of supporting and mentoring entrepreneurs who are motivated more by community uplift than by profit. For congregations, it's a proactive way to build up their surrounding communities and build relationships with others doing good work.

Money 'not the most important thing'

One seed of hope pitched at the event was, literally, an indoor garden box that will help food-insecure people grow potatoes at home. The vertical contraption, to be distributed in Janesville neighborhoods that lack garden space, was the idea of local resident Jonathan Van Tassell. Participants voted him a special Love Your Neighbor Award and $1,500 in seed money.

Another $1,500 went to first-place winner Julie Servantez. She pitched The Hive, a restaurant, grocery store and community gathering space that will offer fresh foods in the city's "food deserts" and job training to disenfranchised workers.

Rebecca Amstutz won second place and $1,000 for Safe Families for Children, which will give families experiencing medical crises or episodic homelessness an alternative to the overburdened county foster-care system. John Mansur, third place, received $500 to support 4th Ward Lawn Care, aimed at serving the 1,100 homes in a high-poverty Janesville neighborhood where yard maintenance is a problem – and hiring young people there to do the work and learn how to run a business. Donna Anderson pitched the Mobile Clothing Pantry to get free clothes to people in greatest need. Attendees voted her the Community Choice Award and $500. 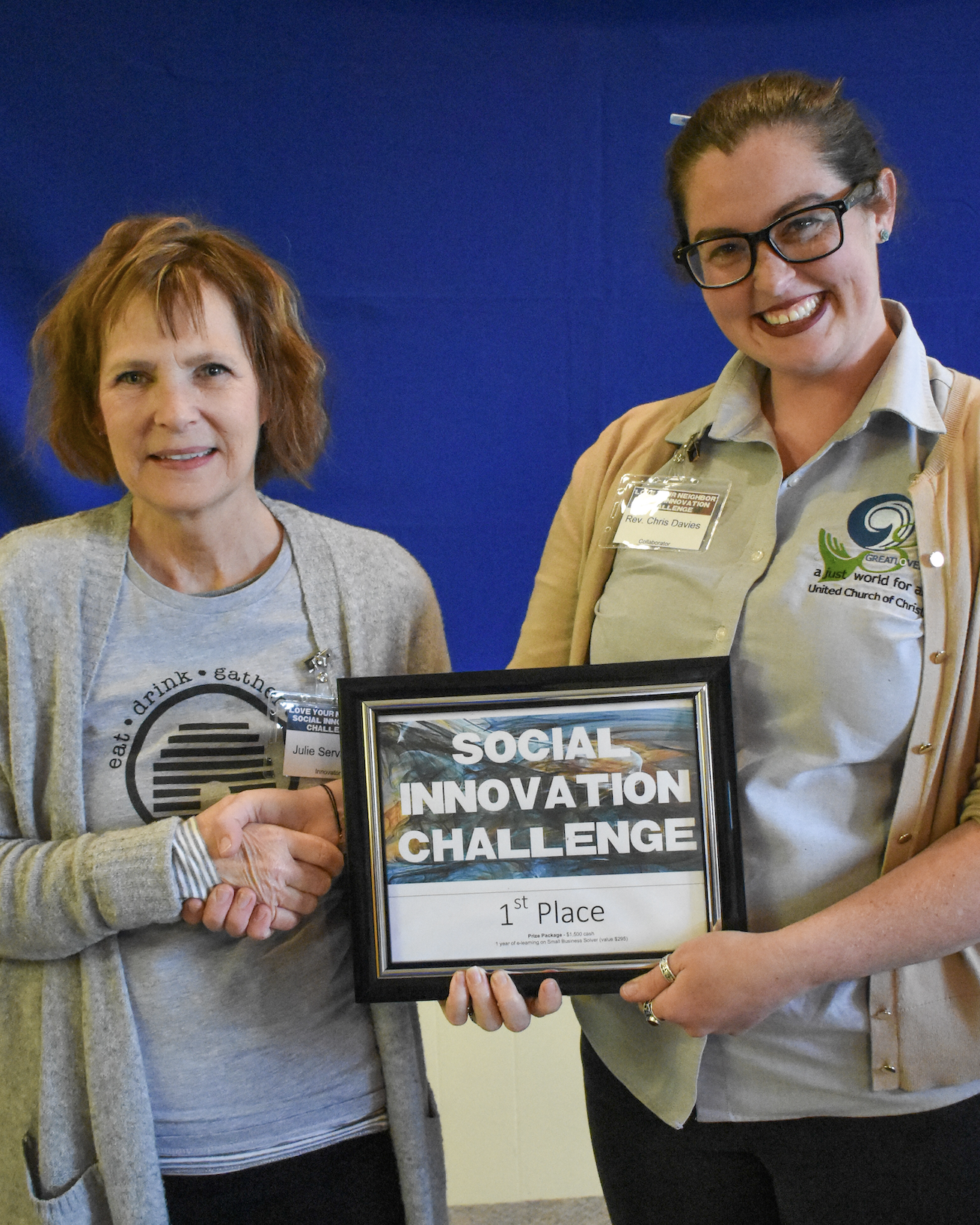 "The money is important – it's a vote of confidence in the ideas – but it's not the most important thing,” said Tisha Brown, associate conference minister for leadership development with the Wisconsin Conference, which provided a $5,000 grant for the project. "It's the relationships." Before making their pitches, all Janesville participants got to meet with mentors, including a bank loan officer, small-business owners, engineers and nonprofit board members. Janesville Economic Development Director Gale Price was one of the judges. And there was plenty of time for networking. Eight entrepreneurs made pitches. In total, 30 people participated.

Brown heard about the approach in a presentation by United Church of Canada staffer Carla Leon during a 2018 conference about grants at the United Church of Christ national offices in Cleveland. The Canadian denomination has been connecting its congregations with local entrepreneurs via small grants for several years through its own Social Innovation Challenge, part of a larger new-ministries program called EDGE. 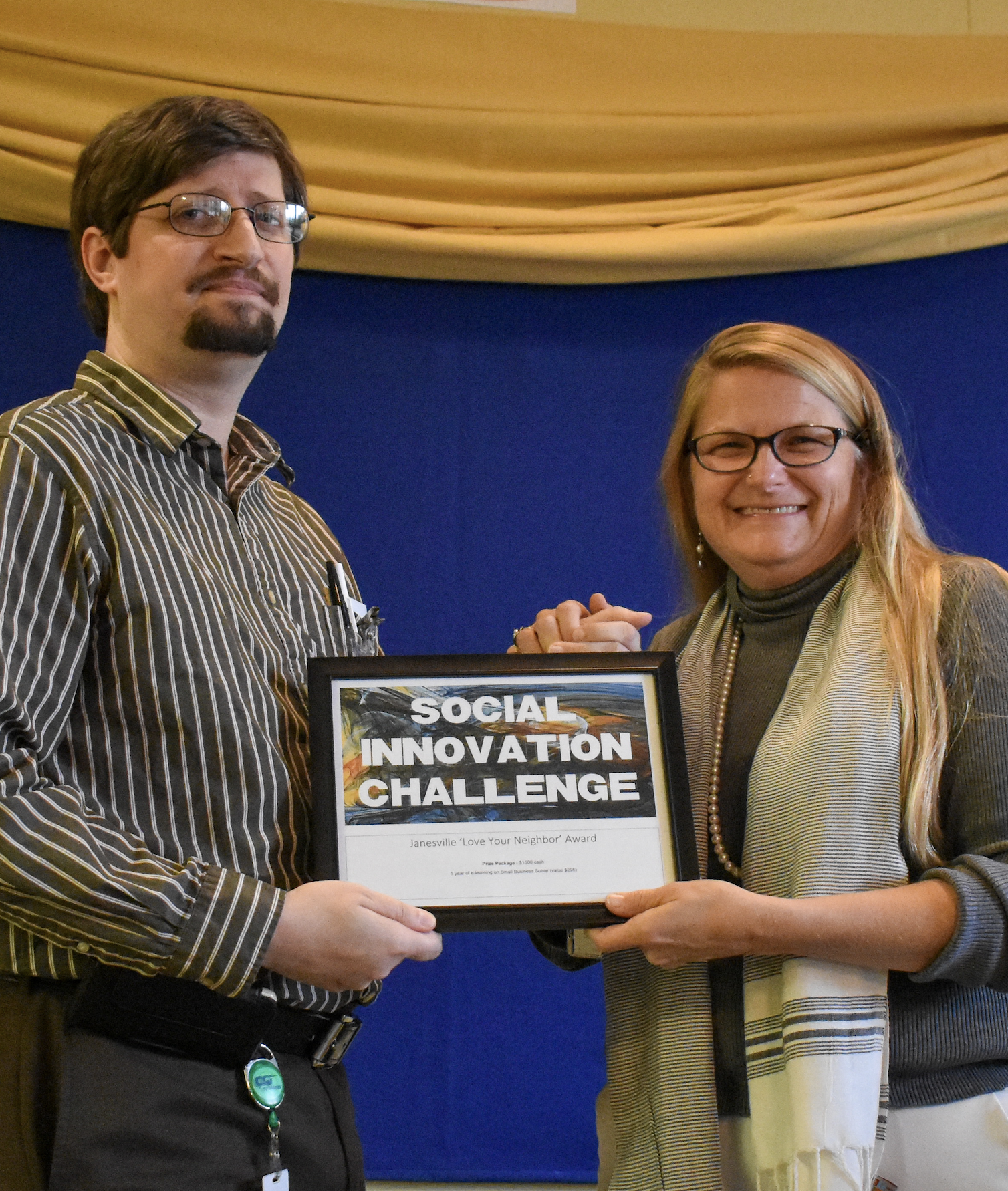 Meantime, the Wisconsin Conference's Catalyst Team had already been inviting clergy and churches to apply for small grants for innovation. Brown suggested the Canadian model to the team, and the Janesville church – whose pastor, the Rev. Tanya Sadagopan, is on the Conference team – agreed to host the first event and contribute $1,500 to it.

"What's unique about this is the specific focus on inviting members of the community to uplift their ideas at the grassroots level," Sadagopan said. "It is geared to inviting people who are not ordinarily invited to the table to become involved – to have the church be the host and to have people in the community say what the needs are and what their ideas are to meet the needs.

"The church is used to responding to crisis. We're used to responding to requests of need, to hunger homelessness, economic injustice. This is a completely new way of the church thinking of its role as a leader. This is proactive engagement – a way to stop thinking about survival of the institution and start being supportive of what the community wants to call forth."

Church as hub of social innovation

"Churches in North America started schools and hospitals. They were the initial hub of social services," said Joshua Fernandes, EDGE Event and Community Manager for the United Church of Canada, which generously helped sponsor the Janesville event by providing Fernandes' time, travel and expertise as a participant. The social-innovation approach is a way for the church to re-embrace that community role, he said, and to support people who can make a difference but might not otherwise think of themselves as entrepreneurs. The opportunity to win grants is "mostly to hook people to come in," Fernandes said. "It's really about coming together. It's about not having government, policymakers, development people and entrepreneurs all in separate silos. We all want healthy families, healthy people, healthy children, emotionally and spiritually." 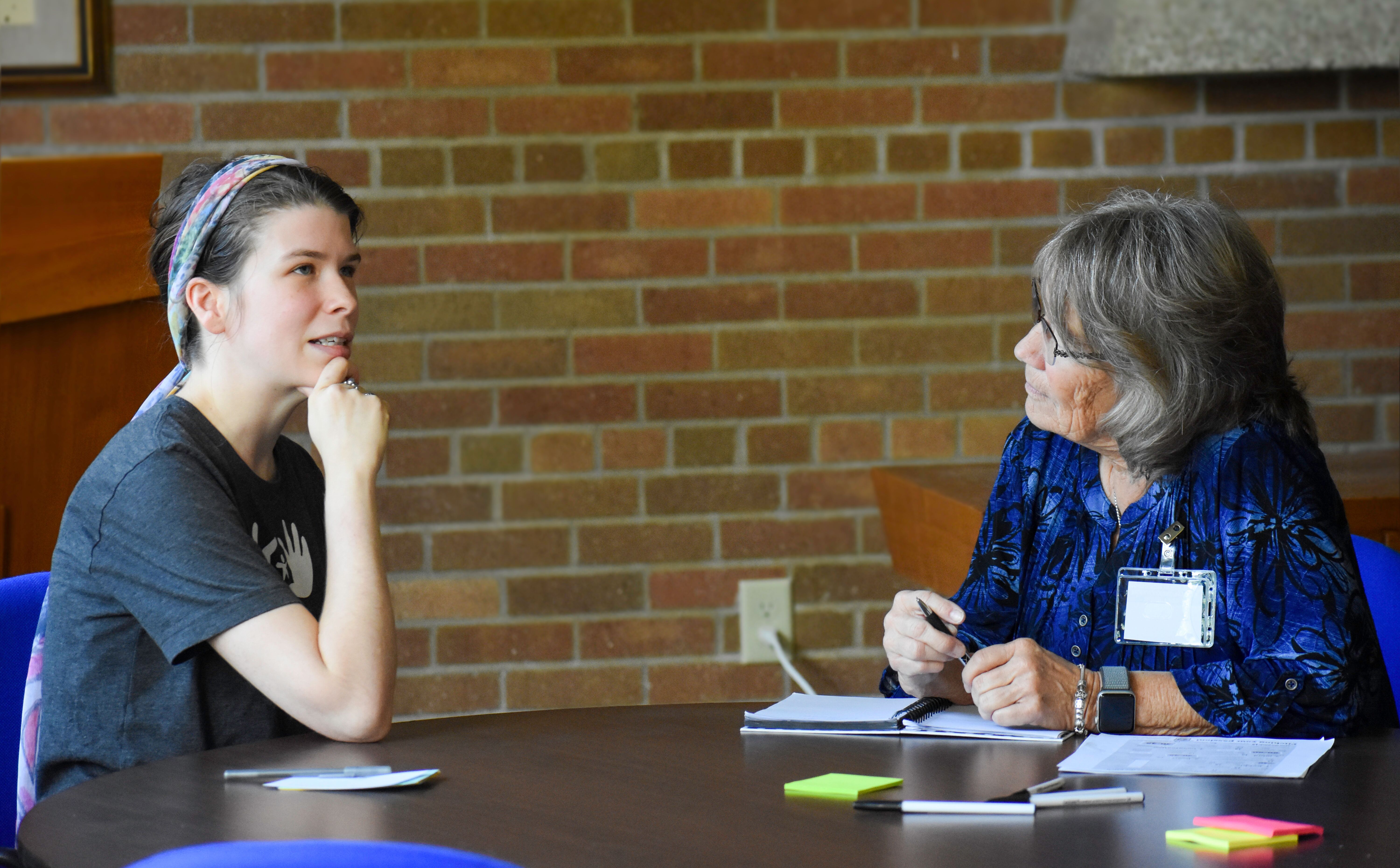 For First Congregational, hosting the event was a way to "begin to think of itself as a hub of social enterprise and activity" in a city of about 65,000 people that has suffered the closing of a General Motors plant and other large employers – and whose economy dipped to depression levels during and after the Great Recession of 2008, Sadagopan said. "We are already ONA, immigrant welcoming – we are the progressive voice of Christianity in Janesville and Rock County," she said. "This takes our Christian leadership to a new level." During the run-up to the event, members found themselves inviting people in the community to apply to take part in the Challenge.

"I am inspired by Janesville's approach to community innovation," said the Rev. Chris Davies, team leader of the UCC's national Faith, Education, Innovation and Formation unit, who served as a Challenge judge. "With people from all over the town, they effectively created a place where ideas to support community networking and growth were nurtured and inspired. Because of their work, the town is stronger! I was proud to be at the first Community Innovation Hub in the UCC, and it's clear to me that this had huge community impact."