To acknowledge that it includes parts of Kentucky and West Virginia – and to signal a hope for new, heart-healthy ways of working together – the Ohio Conference of the United Church of Christ voted Sept. 28 to take on a new name: Heartland Conference.

The name will take effect "in incremental ways" over several months, starting now, said the Rev. David Long-Higgins, transitional Conference Minister. The Conference hopes to be "fully engaged with the new name" by early 2020, he said. Delegates adopted it by a vote of 115 to 8 at the Conference's Annual Gathering in Westerville, Ohio.

The name – just one item emerging from months of Conference-wide listening sessions led by a Vision Team – is only partly geographical, Long-Higgins and other leaders said. It does in fact recognize that seven churches in northern Kentucky and two in West Virginia are among the Conference's 360 congregations. However, "we are not merely changing the name," said Conference Moderator Cathy Maurer Green. "We are embarking on a new phase of our journey together." 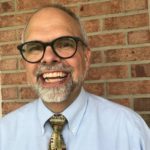 The Conference consists of four Associations that are, structurally, stronger centers of authority than are found in most UCC Conferences. Historically, this has sometimes made common work and funding at the Conference level a challenge. The Conference will continue the visioning process to discern new ways of working together without diminishing the gifts and importance of each Association, Long Higgins said. He said the "heart" in "Heartland" could help everyone in the Conference "rehearse a new language" that is both scriptural and metaphorical.

He noted that the Bible mentions "heart" 886 times, in verses such as, "I will give them one heart and put a new spirit within them" (Ezekiel 11:19).

Long-Higgins likened the Conference to a human heart with four chambers. "The heart can only function in fullness when each chamber is working in concert with the other chambers," he said. "I thought this an apt metaphor for our life together, as each chamber of ministry is most alive when working in concert and being mutually strengthened by the other chambers. The arteries and veins must be clear so that the pulse of God’s love can flow through deeply, profoundly, strongly."