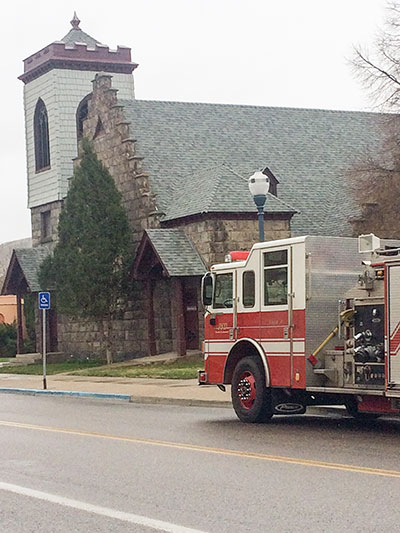 A very small congregation in Southeast Idaho is praying for two of their own, after an explosion and fire in the church boiler room on Tuesday afternoon, March 21, left a husband and wife severely injured.

The moderator of the First Congregational United Church of Christ, in Pocatello, Idaho and his wife had volunteered to do some routine maintenance in the building when something sparked the blast. The couple was blown clear of the room by the concussion of the explosion, and had to be life-flighted to the University of Utah for treatment.

Today, Norman Wright and Kathy Wright, who both suffered second-degree burns, are doing better than expected.

"God is so good," said Starr Reardon, a ministerial candidate and member of the church council. "Both are responding super well. Norm is able to drink. They are making good progress. Their situation is so much better than we were told to expect by EMT's. All of Pocatello, our church and all the other denominations, are praying for them."

Reardon was one of six other people in the building at the time of the flash fire. So was the church secretary, Marilyn, (who asked her last name not be used) who said no one else was hurt. She answered the phone in the church office late morning on Wednesday, where she was sitting with no power waiting for the insurance adjustor and representatives of the city and the fire department, who need to further their investigation.

After the inspection, Reardon said the news was not so good about the condition of the building. Initially they saw fire damage in the boiler room, and doors that had been blown off their hinges.

"It's more severe than originally thought," Reardon said. "There are walls buckling, cracks in the ceiling and stained glass dust throughout the sanctuary. The city is calling engineers to come in and check for structural damage." They are also worried about asbestos.

"Marilyn is chained to her desk," Reardon continued, "with a cell phone in one hand and church phone in the other. There is so much that has to happen right now."

The building is shut down for the duration of the investigation, and the congregation will be worshipping in the parsonage next door this Sunday. The Seventh Day Adventist church has offered them a place to hold services too. And while the church is insured, there are other questions that will need to be answered when the members come together this weekend.

"We have the oldest pipe organ in town," Reardon pointed out. "It will cost $2,000 just to have it inspected. We also have a young disabled man who lives on site, we barter for his services. Now we are trying to figure out housing for him as well. We are just hoping our insurance will cover his transitional housing too."

First Congregational is one of the oldest churches in Pocatello, dating back to 1904. Marilyn, who was baptized at the church, said that while it is well known in its community, it is "very small, and in decline," with members determined to stay together as a faith family.

Their pastor retired two years ago, and when Reardon and her husband joined the church and became members of the council, they started a prayer group hoping to find leadership and direction for the congregation in the transition.

"They are doing their best to keep the UCC presence alive in Southeast Idaho," Marilyn said. "Everybody is ministering the church. We all look out for each other."

"Now I feel called to be there for pastoral care," Reardon said. She is halfway through a Master's of Divinity program  at Portland Seminary and plans to pursue ordination in the UCC.

"I know this sounds like this is a terrible story for us, but I think God is going to use this in Pocatello," said Reardon. "We are still here. Pray for revitalization in Pocatello. That God uses this for healing and glory."