As the holy month of Ramadan begins, signs of support for Muslim neighbors have been popping up in several Christian communities around the country. In the United Church of Christ, a concerted effort of interfaith hospitality and solidarity is in bloom in the Pacific Northwest, with signs and banners proclaiming "Blessed Ramadan" and "Love Your Muslim Neighbors" posted as part of the Conference's Honoring Sacred Time Campaign.

"Over 20 churches in the conference have made at least some commitment to the campaign, and we want to increase that participation over Ramadan," said the Rev. Mike Denton, conference minister of the Pacific Northwest Conference, which counts 82 churches in Washington, Northern Idaho and Alaska. 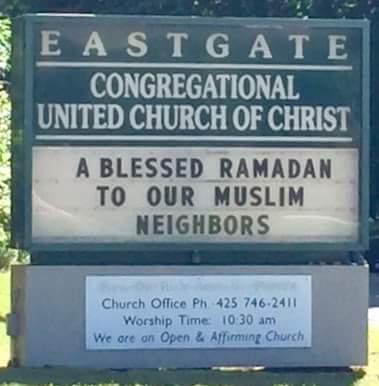 This interfaith Ramadan campaign, a celebration of solidarity, is the result of a partnership between representatives from the Northwest Chapter of the Council for American Islamic Relations (CAIR), the Pacific Northwest Conference of the United Church of Christ, and denominational leaders. UCC churches, to honor Muslim neighbors' Ramadan commitments, have been invited to do three simple things during this holy month:

1)    Hang a banner or change their message boards in a way that honors our Muslim neighbors.
2)    Take time to make an appointment to visit a local mosque or Islamic center to bring greetings from their local congregation.
3)    Consider hosting an event to learn more about Islam and make a special effort to speak up against anti-Muslim rhetoric.

"Part of the idea of this is relationship building," said Denton. "As the trust is being built up, relationships are established, the hope and intent of this campaign being that most of our churches will have begun to establish a relationship with our Muslim community by the end of Ramadan."

The campaign has a Facebook page, where public displays of extravagant hospitality are evident.

Eastgate Congregational United Church in Belleview, Wash., was one of the first congregations to join this campaign, posting a sign wishing a "Blessed Ramadan to our Muslim neighbors." And Denton says this is not the first time Eastgate has voiced public support for their Muslim brothers and sisters. Six months ago, the small congregation also put a positive message on that reader board outside the church when a local elected representative said something disparaging about Islam. 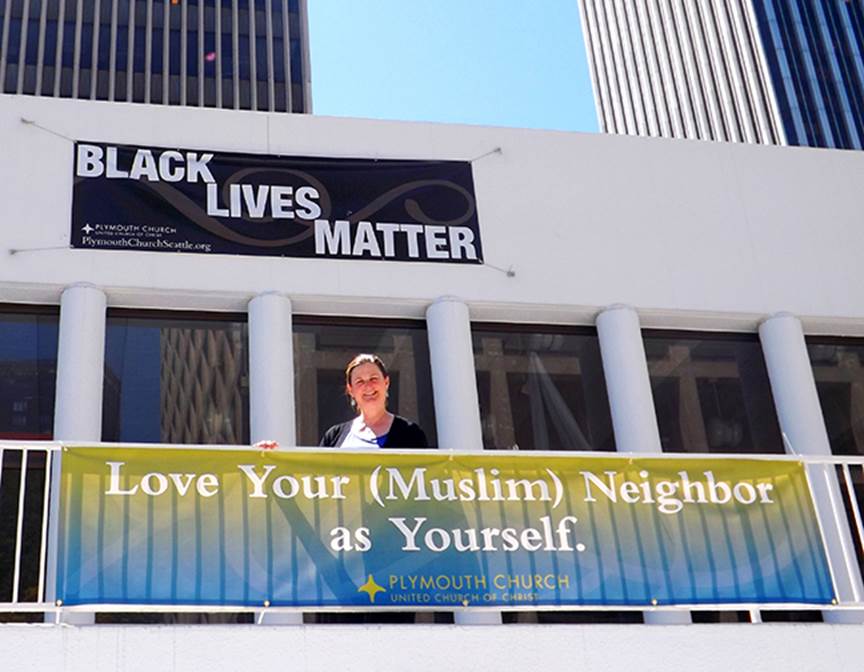 Plymouth Church in downtown Seattle has been hosting Muslim prayers on Fridays for 15 years now and their Ramadan sign is hanging right at the entrance where folks go for Friday prayers. And Alki UCC, which shares a building with a local Jewish community in West Seattle, jointly purchased its sign with synagogue Kol HaNeshama.

"The response from the Muslim community has been very positive," said Denton, "and this is just the first part of the campaign. The next step is participation in an interfaith Iftar on the evening of June 15."

The Muslim Association of Puget Sound (MAPS) has issued a public invitation to the UCC churches in the Pacific Northwest community to its 10th annual MAPS Ramadan Interfaith Iftar, the meal eaten by Muslims after sunset during Ramadan.

"In this time, changing the narrative of how faith communities relate to one another is so very important," said UCC General Minister and President the Rev. John Dorhauer. "When in our current political climate leaders use race and creed to engender fear of the other, the United Church of Christ must steadfastly maintain its clear commitment to unity, to justice, and to equity."

In Minnesota, after the Minnesota Conference of Churches unveiled its "Blessed Ramadan" project, Pilgrim Congregational Church in Duluth jumped on it.

"Time was too short to make yard signs or properly plan an educational event," said church pastor the Rev. Jennifer Amy-Dressler. "But within 24 hours, a church member had printed up the large sign for our sandwich board, and another member put it up (in the cold rain). We printed paper signs that members can place in windows at their workplace or homes, and distributed them Sunday morning. We also included a blessing our responsive prayer Sunday morning."

Dressler noted that the current political climate of the presidential campaign "made it especially important that we live out our extravagant welcome and deep respect for our Muslim sisters and brothers – locally and nationally – in this visible way."

Minnesota Conference Minister the Rev. Shari Prestemon said that she knows of several UCC congregations participating. She is delighted by this witness of honor and respect for those whose faith may be unfamiliar to us, but whose core values are shared. "In a time when Muslims as a group are often the target of widespread discrimination and misunderstanding, it's important for different faiths to extend our hands to one another in mutual respect, witnessing to a more gracious and loving way of interfaith relationship."

"The United Church of Christ was birthed out of an impulse to unify," said Dorhauer. "Its motto, 'That they may all be one,' is a call to reshape human community in such a way that all barriers to understanding, acceptance, and love are removed. What began as an ecumenical invitation has broadened. We now see that God's vision of Shalom, of creating the beloved community of full inclusion, is not limited by religious boundaries. Ramadan Mubarek! A Salaam Alaikum! We stand in solidarity with our Muslim family of faith."

"The good deed is not equal to the ill deed. Put forth that which is best, and you shall find that the one with whom you have enmity is a close ally." –– Quran [41:34]