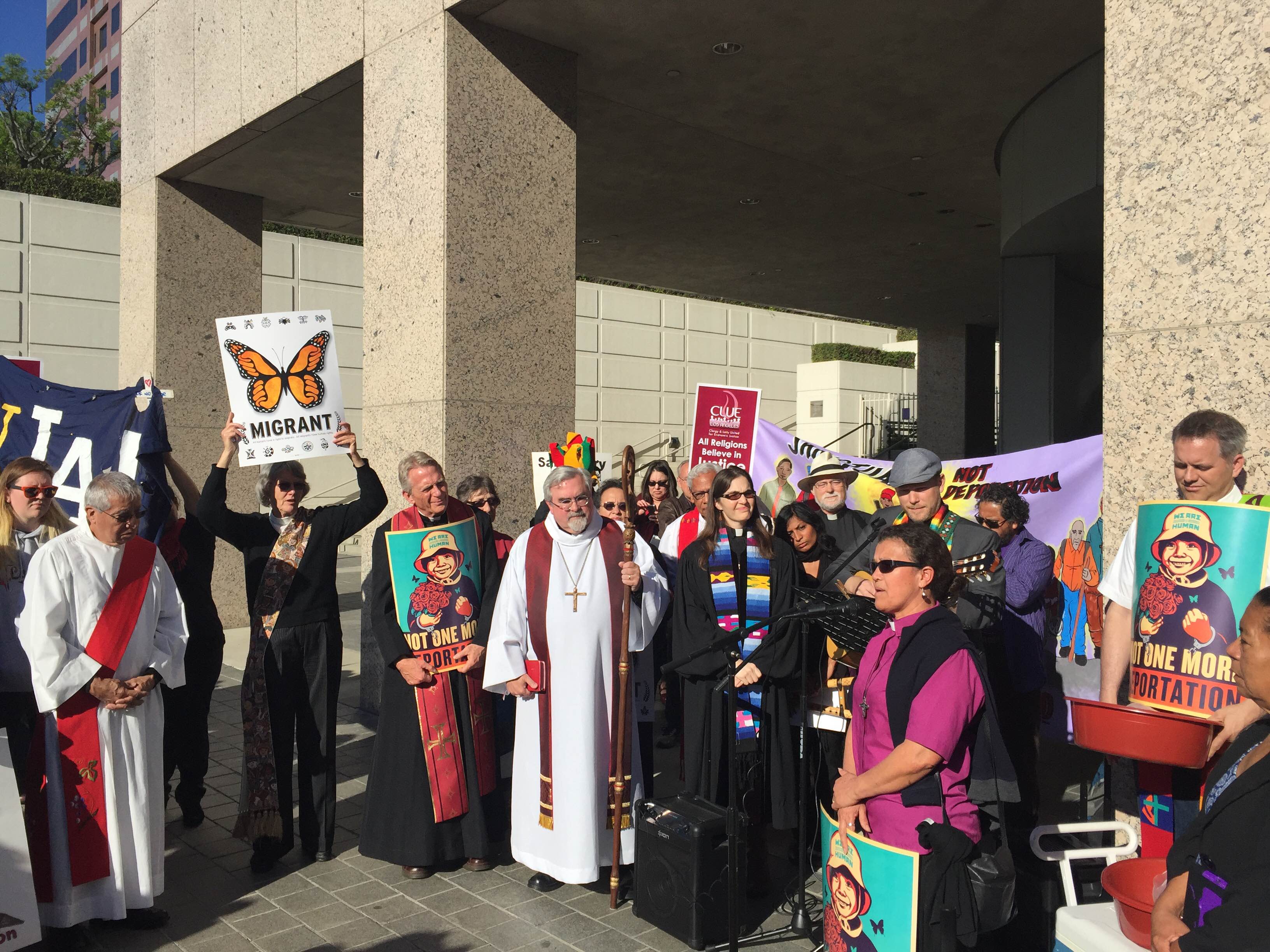 United Church of Christ immigration advocates in California, joined by dozens of other people of faith, clergy, and communitymembers in a Holy Week protest, were ready to be taken to jail Wednesday morning, March 23, in downtown Los Angeles for standing up for the rights of refugees.

"I am risking arrest at this 'Sanctuary Yes! Deportations No!' action because I feel morally compelled to do so," said the Rev. Andy Schwiebert, the lead pastor of (a)Spire Ministry, a new church start housed at First Congregational Church of Pasadena, UCC. "Rather than providing sanctuary to refugee children and their families fleeing violence in their home countries, our federal government is terrorizing their communities with raids and deporting many of them back to face the violence they escaped."

Schwiebert, who was one of 21 leaders of different religious traditions arrested by local police for failure to disperse, was raised in Shadow Rock UCC in Phoenix –– a congregation that has been actively providing sanctuary to immigrants under order of deportation for the past couple of years. He said that crusading for the rights of immigrants is in his DNA. 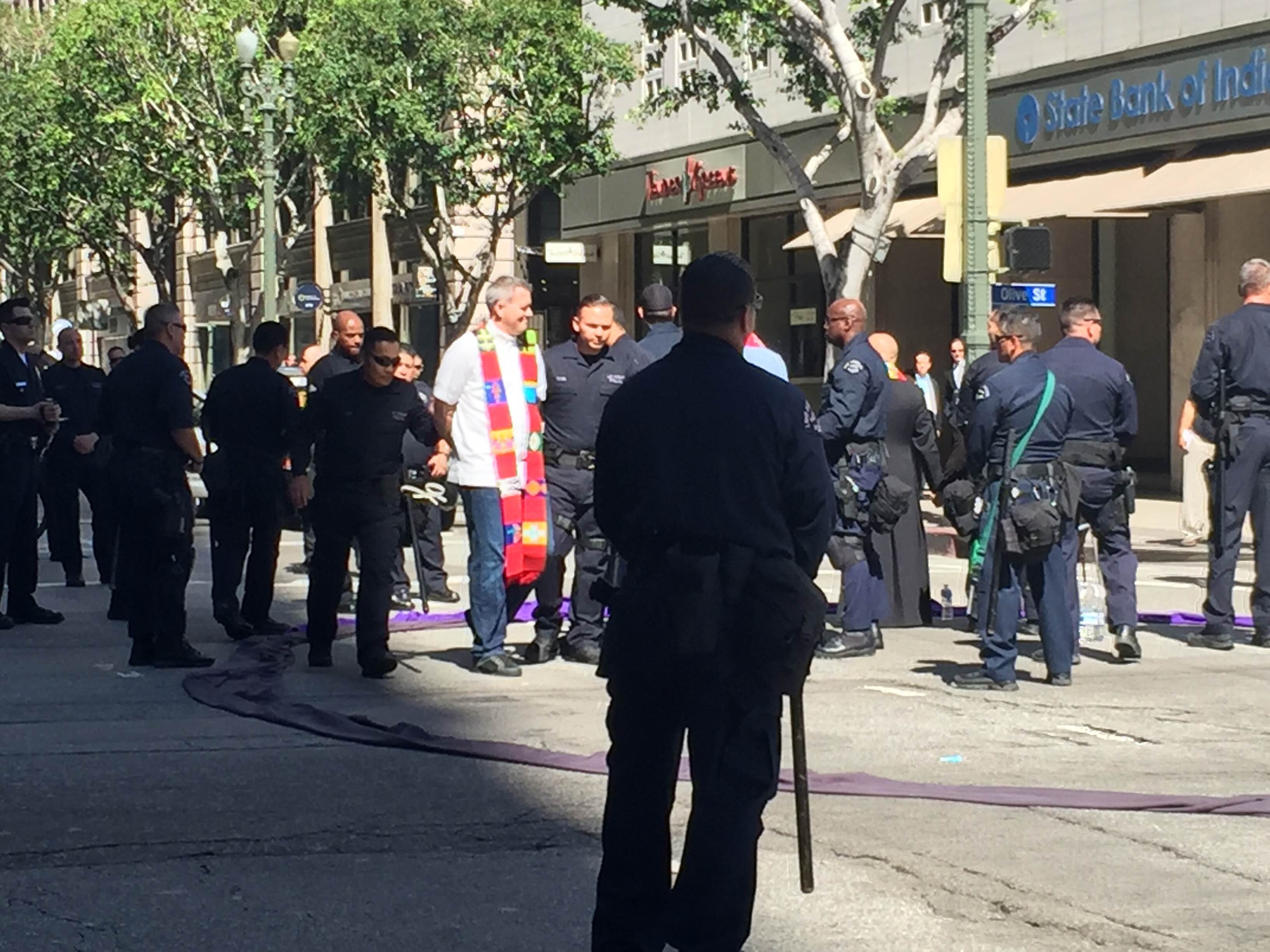 "I believe that we have a moral obligation to open our doors to these children and adults," he said. "As a nation of immigrants, it is in our DNA to welcome the 'poor, huddled masses' to our shores. As Jesus taught, like the Samaritan who saw the stranger beaten and left on the side of the road, we are called to be neighbors to those who, like these refugees, are in need."

The show of solidarity is in response to the Department of Homeland Security's program, "Operation Border Guardian," that has already detained more than 300 Central Americans who came here as unaccompanied children. It's a program the United Church of Christ National Collaborative on Immigration has been working against, along with a network of grassroots UCC pastors and lay leaders, to stop deportations and family separations in local communities around the country.

The Rev. Noel Andersen, organizer of the UCC immigration collaborative, was also arrested on Wednesday.

"We are working alongside our interfaith partners and immigrant leaders themselves to influence the administration to stop the raids, help provide legal assistance to those in need, and provide Temporary Protective Status for those fleeing the extreme violence and persecution in Central America," said Andersen, who is also national grassroots coordinator for Church World Service. "Since we heard reports of the raids [by ICE/DHS], many of our congregations have joined efforts in supporting the Sanctuary Movement. Some have even taken in Central American families to help them in their legal processes. We cannot stand by idle while hundreds of asylum seekers are being deported back to their potential death." 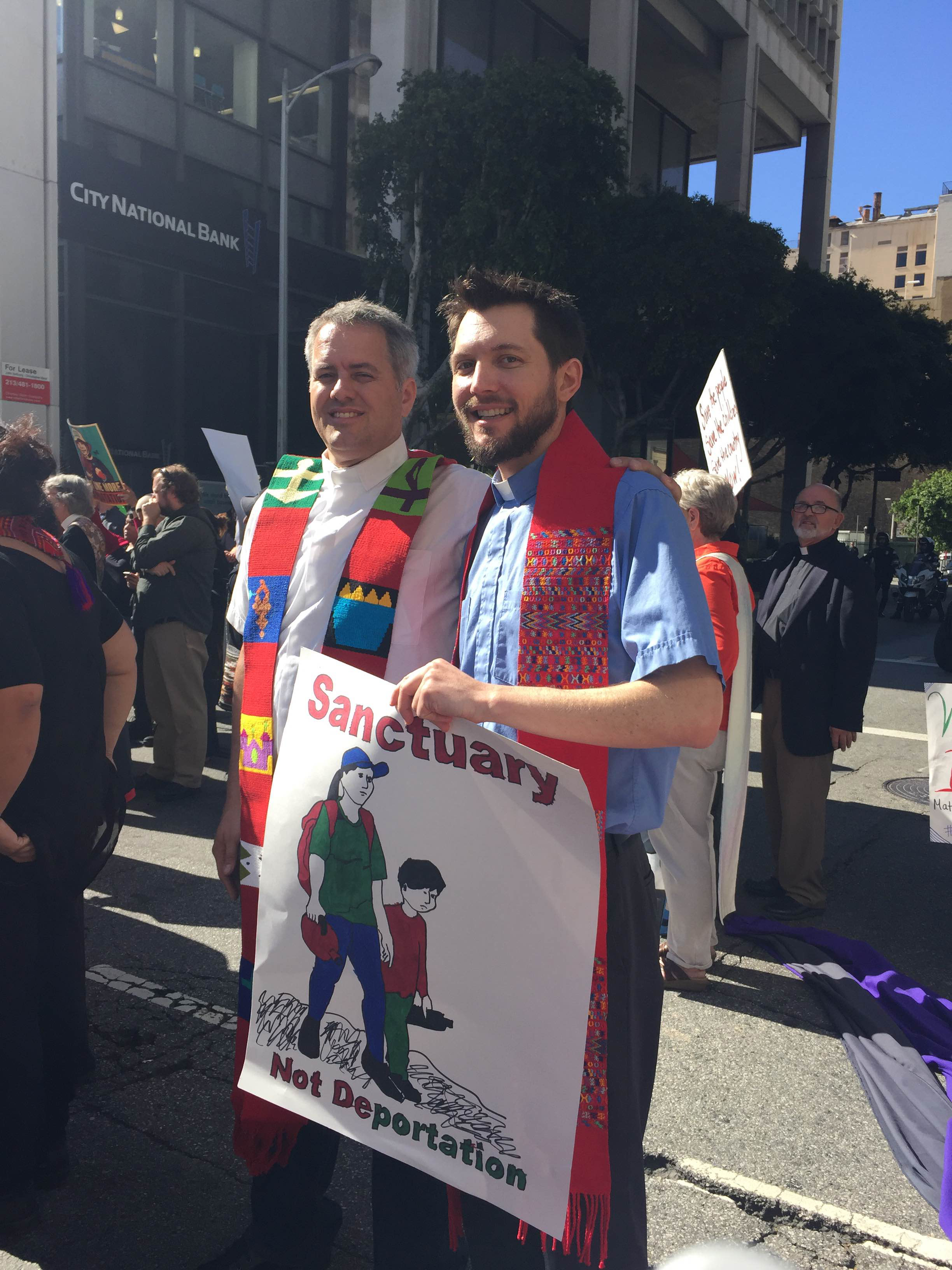 During this most sacred time of year, the group representing Muslim, Episcopal, Catholic, Methodist, Jewish, Nazarene, UCC, and Presbyterian faiths –– organized by Clergy and Laity United for Economic Justice (CLUE) and Church World Service (CWS) –– gathered outside U.S. federal court, carrying signs demanding sanctuary. Inside, the court was hearing deportation cases of Central American children. The faith leaders demanded that the government stop targeting children and called for an end to ICE raids and deportations.

"We are also praying for the Supreme Court justices next month, that they make the right decision in allowing relief from deportation through the Deferred Action for Parents of Americans, so that, finally, over 4 million families can live without the fear of separation," Anderson said.

The UCC Southern California Nevada Conference supported the interfaith "prophetic action of civil disobedience," said Conference Minister the Rev. Felix C. Villanueva. "As members of the United Church of Christ, we are called to offer an extravagant welcome to all and we do so with open arms, no matter where they are on life's journey and no matter their documentation status."