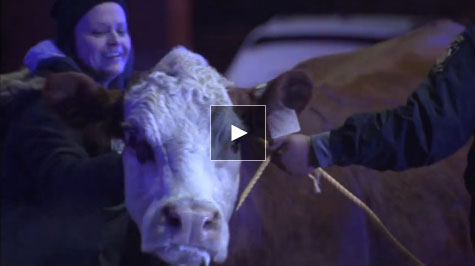 He juggles a lot of responsibilities as the pastor of one of Philadelphia's oldest churches, but wrangling a huge cow on a city street in the early hours of the morning during a snowstorm is not something the Rev. Michael Caine ever thought he would be called to do.

It happened shortly after 6:00 am on Thursday, Dec. 14, after Stormy, a 7-year-old brown and white Hereford, wandered away from the creche at Old First Reformed United Church of Christ not once, but twice, ending up first on the freeway, and later in a parking garage.

"I got the call about 3:30 am and came down on my bike in a snowstorm," said Caine. "I was here for the second escape."

Caine pastors Old First, the Old City area church which is known for the live animal nativity scene that has been a familiar part of the Christmas tradition in Philadelphia, Penn., since 1973.

The minister was captured on videotape by a local news crew trying to corral Stormy following that second escape, and get her back into the enclosed area outside the church. When unsuccessful, he accompanied the 1,500 pound cow on her stroll through city streets.

The pastor told the WPVI crew that someone may have tinkered with the latch on the corral that keeps the animals penned in. Caine also said while that may have been the case the during the first escape, he was watching out the window the second time, and the animal just pushed her way past it. Stormy has now been taken back to the farm, replaced with a smaller cow named Ginger who right now seems content to stay put.

Old First, which predates the Declaration of Independence, is extremely grateful for the actions of the safety forces who responded to the calls about Stormy’s escape.

"We take seriously our responsibility to care for these beautiful animals, and work closely with the farmer who supplies them to ensure their safety and well-being," reads a message on the church website. "We want to thank the Philadelphia Police Department, Fire Department, Animal Control, and Health Department for their care and assistance."