William Barber: ‘We must claim the deep moral language of faith’ 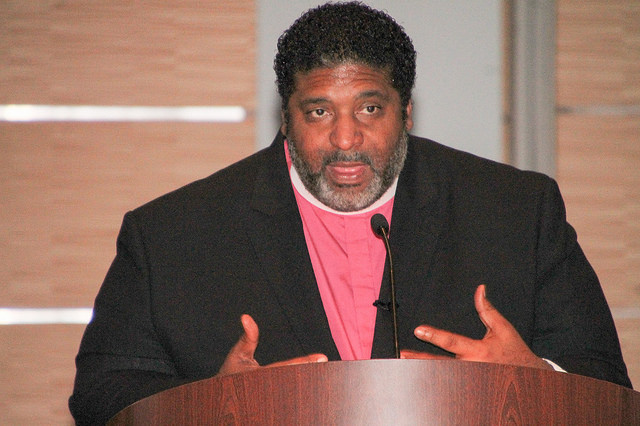 A new wind — a gale, a typhoon, a wail — roared into the Baltimore Hilton Inner Harbor Saturday night in the form of the Rev. William J. Barber, who called for a latter-day Pentecost to shape the demand for a moral imperative in America today.

The keynoter for the gala dinner of the Shaping Our Future fundraising campaign of General Synod 2017, Barber sounded a clarion call for the church to speak in tongues again to create a new language.

"We can no longer use the language of Caesar," he said. "It's too puny to challenge the extremism we are facing now, things that are wrong and just plain mean. We must claim the deep moral language of faith, and silence is not an option.

"We've got to recover straight talk so that we can call what's happening today exactly what it is. We can start with this extremist health care bill. You know what that is. It's sin!"

The voice of Barber, a Disciples of Christ pastor and former president of the state NAACP in North Carolina, thundered across the banquet hall as he brought the cheering guests to their feet. "When you roll back Medicaid, that's sin! When you pass legislation that will force rural hospitals to close, that's sin! That's political murder!

"We're talking about $700 billion in tax breaks for the rich, the largest transfer of wealth since black bodies were sold into slavery. It's ungodly that we're even having this conversation. This is an attempt to mainstream inhumanity by people drunk on some fermented brew of the Tea Party."

Barber called on the United Church of Christ to help launch a new Poor People's Campaign that would benefit from a fusion of poor white, black and brown people to fight an economic system that seeks to keep them from understanding their common humanity.

"Long before the Russians, our political systems were hacked by racism. It's not either/or. It's both/and."

He pointed to the voter suppression that has occurred since 2010. "Twenty-two states have passed voter suppression laws. Those are states where 54 percent of the blacks in this country live. In this past election, there were 868 fewer voting places in black and brown communities. In Wisconsin alone, we believe 250,000 votes were suppressed."

Barber described a racialized code language used to pit poor whites against blacks, whom they believe are getting benefits they don't deserve. "This is a race problem and a class problem. We need the fire of Pentecost to illuminate the reality.

"It's going to take some of our predominantly white denominations to say some of this stuff. You may need to have your next convention on the steps of the legislature. We need to get the church out into the streets where it belongs. We have to get out of single-issue silos and link up."

Barber urged the crowd to think about more than a strategy. "We need a long-term plan for a moral agenda that will not just change this next election but will change this entire century.

"What if we didn't just curse the darkness? What if we could organize in 25 states for 40 days? What if we put on our clergy regalia and sat in at Ryan's office and McConnell's office?

"What if I don't believe the last Pentecost has happened? The answer is blowing in the wind!

"Spirit of the living God, breathe on us!"