Vasquez-Levy: ‘Our well-being depends on the well-being of everyone else on the planet’ 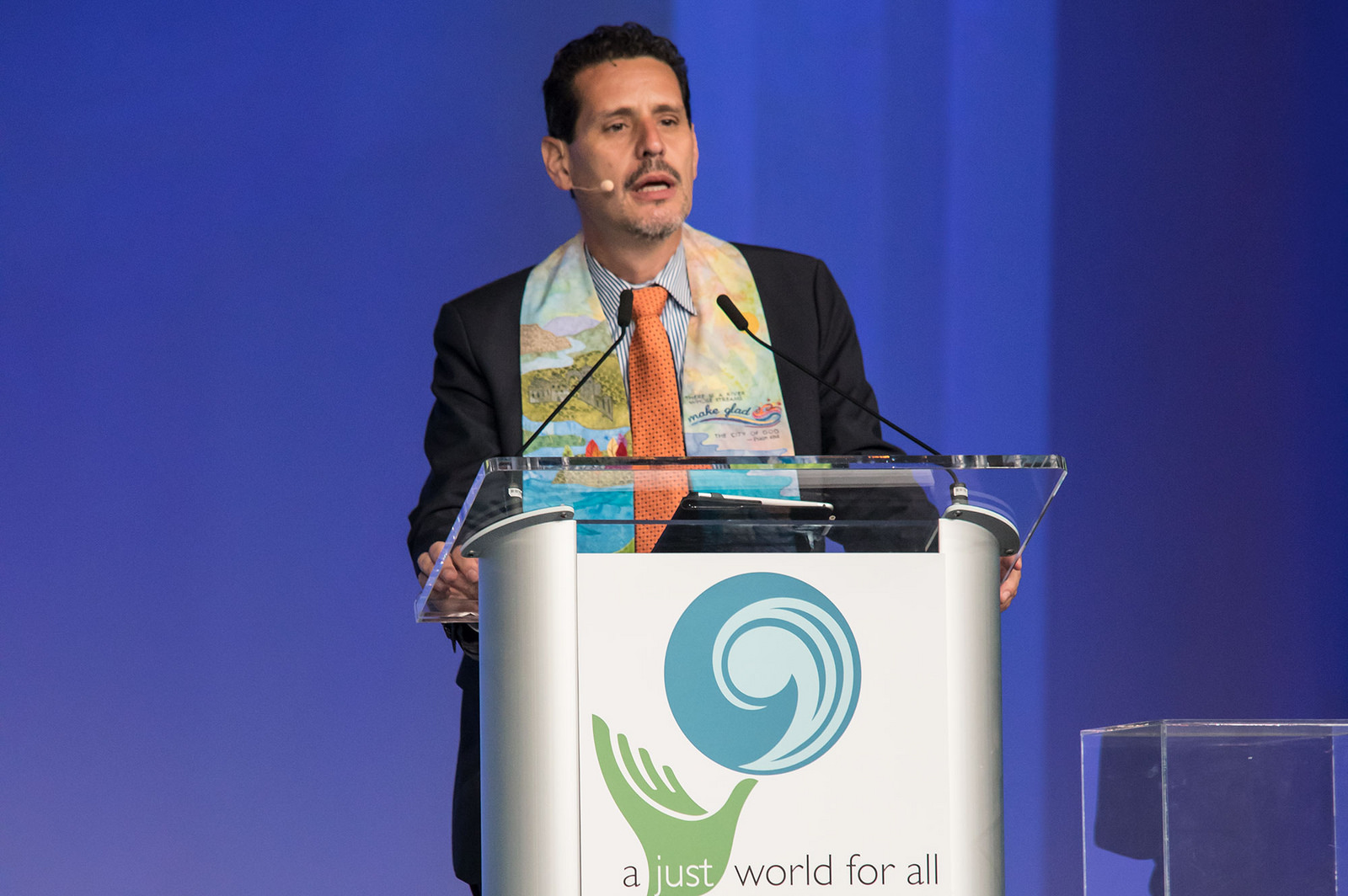 Get in the river, Naaman — and we, too, must get in and get wet to get well.

That was the message the Rev. David Vasquez-Levy, president of UCC-affiliated Pacific School of Religion brought to Monday night's worship at General Synod 2017. He drew on the first Kings story of Naaman, the powerful warrior who sought to be cured of his leprosy and who was ordered into the river to be healed. But Naaman was just a cypher for the church in this sermon, a church that needs to embrace — even be muddied by — the diversity that we are called to champion.

He called up all those water images that dominate the immigration headlines — a stream  of immigrants, a wave of unaccompanied minors, a flood of refugees — to refocus the General Synod river on our changing complexion.

"The same river that makes glad the city of God," he said, "Is also the river in which we are called to be buried into Christ's death that we may be raised with Christ to walk in newness of life. We know a thing or two about complicated water images….

"But sometimes, for our own healing, we must dip in a new river, wade in a new stream, ride a new wave, be cleansed by a new flood. Our own healing will only come when we get in the water."

Vasquez-Levy offered some statistics to make his point: In 2010, 50 percent of all the children born in the U.S. were children of color, and by 2040 those children will be part of a plurality of the population. No group will have a majority.

"We must reframe the way we talk about this stream, this wave, this flood. It's not a threat. It's the river that makes glad the city of God, the holy habitation of God, that will revitalize our church, our communities, our society. But, folks, it won't happen until we get wet."

Vasquez-Levy is particularly well suited to lead the church into the water. Born in Guatemala of a Christian father and a Jewish mother, he's the first Lutheran and the first Latino to lead PSR and one of the youngest at 48. His personal journey has taken him from Central America to Canada to Germany and the American Midwest before he took the position in Berkeley, Calif.

"We need to celebrate the diversity we have in this hall. It is a far cry from where we were 60 years ago," he said, "but we also must name how far we have to go when the progressive Christian movement remains nearly 90 percent white."

He noted that theological education is becoming more female and more brown, and the church today must invest in people "who don't come from our own communities and may not serve those communities when they leave."

He recalled the wordsmithing that took place 241 years ago, as the colonists set out their goals for a new nation. However, he suggested a new variation on that declaration:

"We need to reclaim all that is good in America, and reframe that in terms of celebrating July 4th as Interdependence Day. In the 21st Century, there is a pressing need to develop a new kind of consciousness, a recognition of the interdependence of everyone on the planet.

"A new (and this time, nonviolent) revolution is necessary, one in which our actions reflect a realization that our well-being depends on the well-being of everyone else on the planet and of the planet itself."

But first, church, get out of the boat and get wet.