In its first action as an Immigrant Welcoming Church, the United Church of Christ marched with the family and friends of an Annapolis, Md., artist and grandfather, seized outside his home on his way to work and detained the past three months by U.S. Immigration and Customs Enforcement (ICE) agents.

Some 275 people, chanting in English and in Spanish, gathered to support the family of Guillermo Recinos Morales and to urge the ICE chief counsel to reopen his case so he can apply for asylum and remain with his wife and children in his Annapolis community. In the blazing July sunshine, the group rallied outside General Synod at the Baltimore Convention Center and headed to the Baltimore ICE headquarters a few blocks away for a vigil and prayer service.

"We are here to bring the house of God to Caesar and the Empire," said the Rev. Randy Sirmons, pastor of the United Church of Christ of Annapolis. "Last Thursday, as the UCC gathered in Baltimore for General Synod, an immigration judge denied Guillermo's motion to remain. And he never received his notice to appear in the first place."

The father of four, grandfather of seven came to the United States from El Salvador in 2005. Recinos Morales is a carpenter by trade, best-known as the artist who created the large, colorful and highly visible street art of chickens in Annapolis to reflect the city's diversity.

His daughter, Astrid Recinos, led the march, and spoke of the pain her family has suffered since her father was placed in detention. She told the crowd that her father always made time for his grandchildren, and asked, "How do you explain his absence of three months?"

"To see my mother cry each night is hard," Recinos said. "I would like to tell her it's all a bad dream." 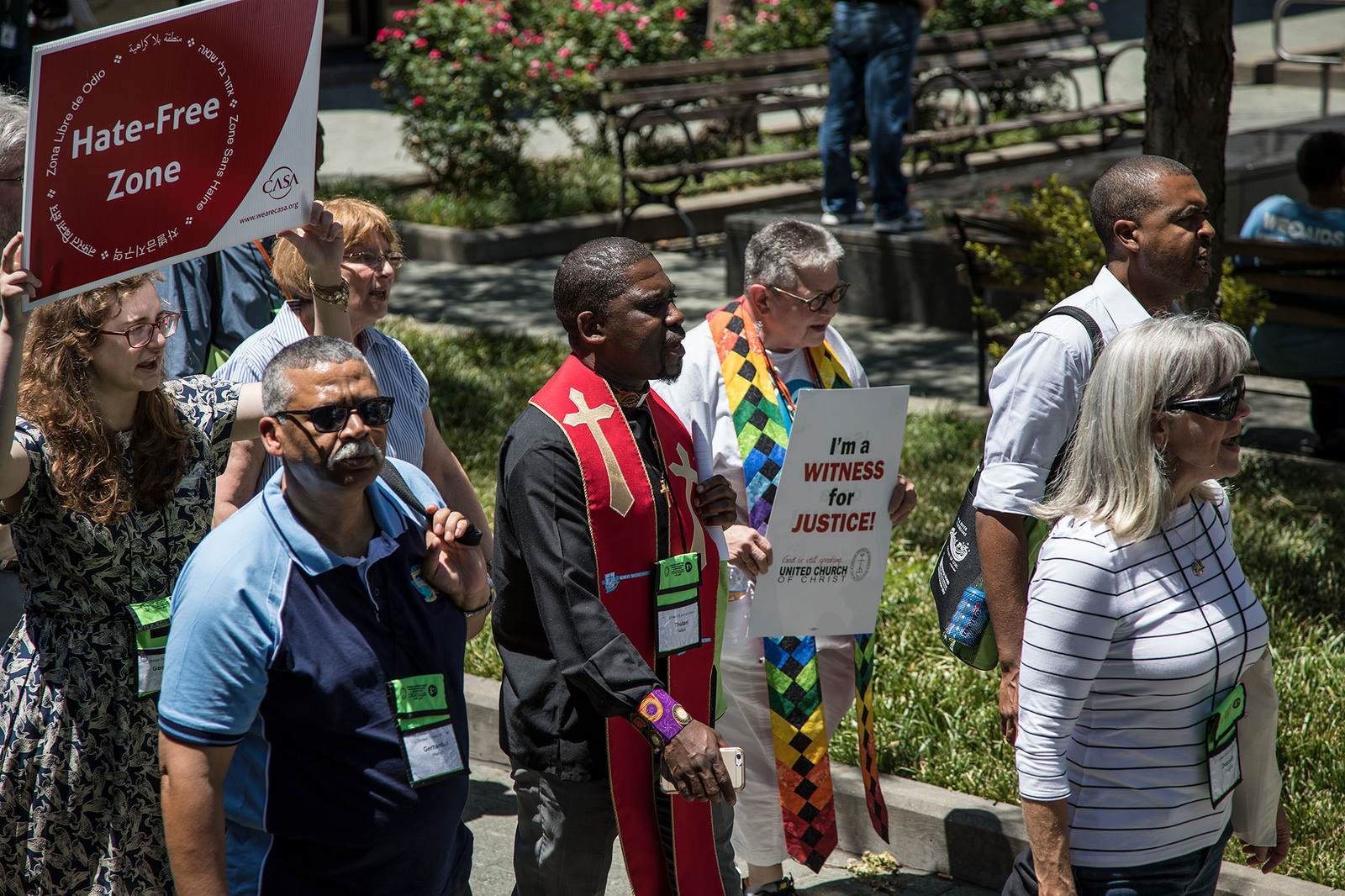 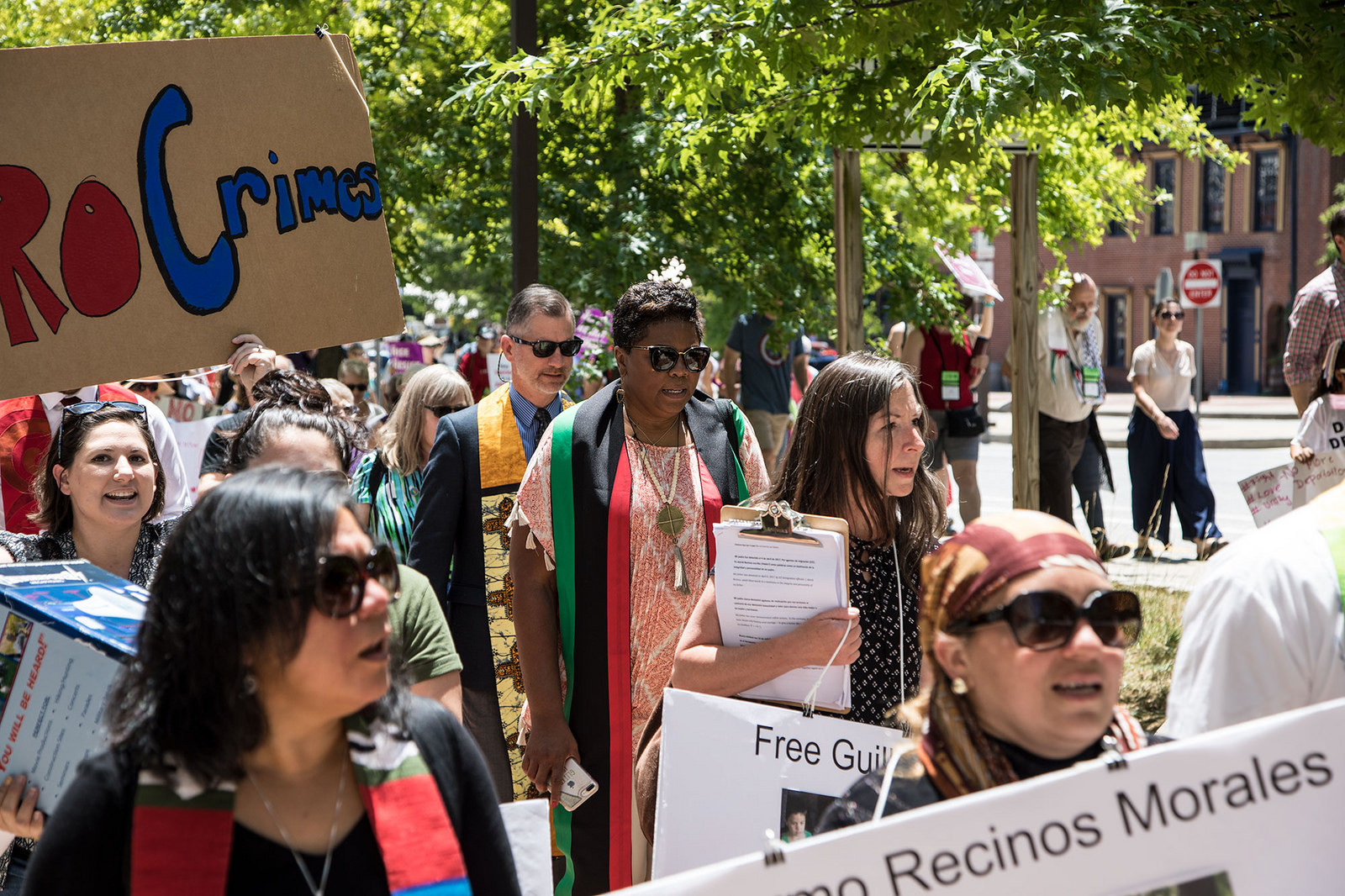 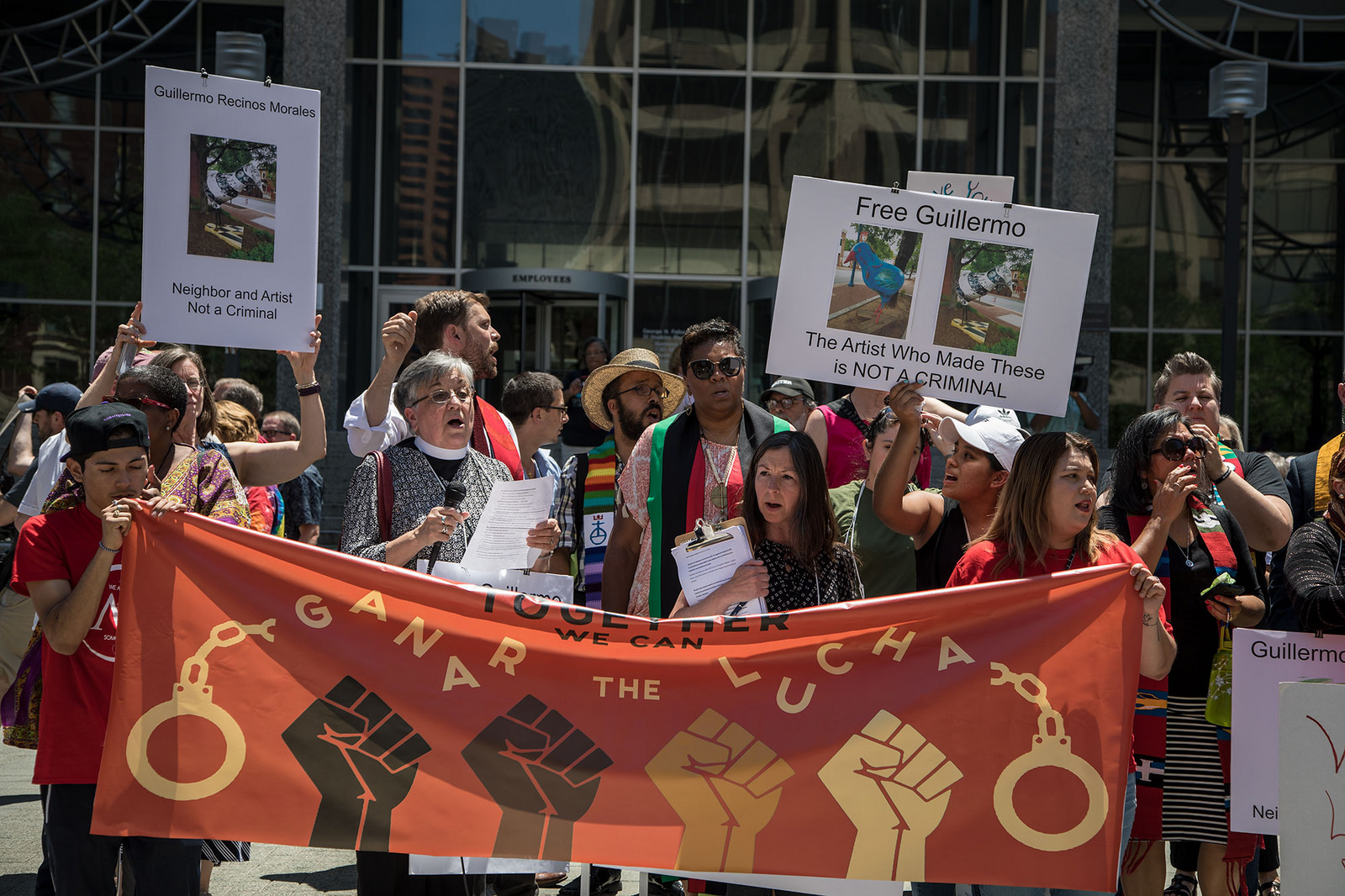 The rally, organized by the UCC National Immigration Collaborative, in partnership with the CASA, the UCC's Central Atlantic Conference, United Black Christians, Latinx Ministries and Annapolis Sanctuary Network, drew advocates from around the country.

UCC clergy and conference ministers who stand with immigrants in their home communities joined the Rev. John Dorhauer, general minister and president, along with the Rev. Traci Blackmon and the Rev. Linda Jaramillo, the current and former Justice and Witness Ministries executives, in speaking out against an administration that has no qualms about separating families.

The Rev. Justo Gonzalez II of Pilgrim-St. Lukes and El Nuevo Camino UCC in Buffalo, N.Y., talked about people from around the country finding their way to his church, looking for sanctuary and assistance in obtaining asylum in Canada. Even last night, a family of six arrived from Oklahoma.  "God makes the impossible, possible, and faith demands action," he said. "As of today we've helped 31 adults and 11 children."

The Rev. Randy Mayer, pastor of the Church of the Good Shepherd UCC in Sahuarita, Ariz., 30 miles from the Mexican border, spoke about the more than 6,000 people who have perished in the desert trying to find a better life. He told the crowd of receiving a phone call from someone in his community who said a migrant had stopped at their house needing water and food, and asking what he should do.  "I asked that person, 'Do you want to do the legal thing or do you want to do the right thing?'" Mayer said the caller did "the right thing."

Diane Haines, from the Minnesota Conference, the primary author of the Immigrant Welcoming Church resolution that delegates had overwhelmingly affirmed the previous night, offered an apology to the Recinos Morales family. "And we want to say to the family of Guillermo, 'We are so sorry that our nation has done this to you. It is so wrong. We walk with you in this."

The UCC national officers cited Scripture in their powerful statements of support.

Dorhauer said, "In a land who enslaved the children of God, in a land made sacred by the tears of those who suffer, that when their tears were shed, God heard their cries and came down to set them free. Asking for a Moses to muster the courage to go to the Pharaoh and say, 'Let my people go!' We are now on sacred ground made holy by the tears of this family, grieving for their father imprisoned now by the new Pharaoh. Take up the mantle of leadership and find your courage.  Go to the Pharaoh and demand, 'Let my people go!'"

"Jesus was an Afro-Semitic Palestinian Jew," said Blackmon. "His family took refuge in a foreign land. The way we are running our government now, if Jesus was among us now, we would put him in detention, too. This is our country and we must demand better of our government. That there is room and space for everyone who wants a better life.  If we don't do it, then we are not the America we say we are. We must rise. We must resist. We must repent. Not just for Guillermo, but for the sake of our own souls."