The Rev. Traci Blackmon opened the first worship of General Synod 2017 Friday with a challenge to the 2,751 delegates and visitors in the Baltimore Convention Center: Do you really know that God is present with us? Are you ready to climb into the wheelbarrow to proclaim that belief?

The acting executive minister of United Church of Christ Justice and Witness Ministries reminded Synod-goers that, besides celebrating the 60th birthday of the church and the 500th anniversary of the Reformation, Synod is also observing the 158th anniversary of the first tightrope walk across Niagara Falls by Charles Blondin.

"As I was lamenting to God that I, the rookie, had ended up with this opening gig, I heard the Spirit say, 'Are you kidding! I set you up with the perfect day.'"

Blackmon described Blondin crossing the roaring chasm on stilts, on a bicycle, doing all kinds of stunts. He then pulled out a wheelbarrow, and the crowd went wild, until he asked for a volunteer to get in the wheelbarrow, which he would push across. Silence. 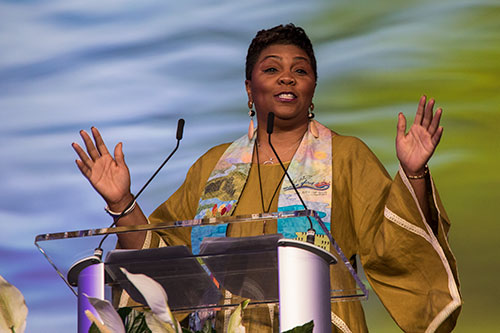 "I wonder if we had been in the crowd that day, would any of us have gotten in that wheelbarrow? I wonder if any of us could have mustered enough courage," she said, "to take that risk?"

"No, we have come to this place to remind ourselves and one another of the truth that we have received and which we believe: That God is with us and God can do anything!"

Returning to Psalm 46, her text for the afternoon and the theme for the entire Synod, Blackmon invoked three images — the sabotaged environment with its poisoned water and poisoned air, the political chaos (which drew laughs when she assured the crowd she "wasn't going there") and the battlefield after the war.

Blackmon challenged her listeners to wage peace "in a whole that views violence as strength. Waging peace will require that we stop claiming God just for ourselves, just for our issues, just for our particular points of view."

Waging peace "will mean stepping off the sidelines and daring to get in that wheelbarrow —knowing God is indeed with us and nothing is impossible with God."

The good news in these troubled times is that "God is in the midst of this city, and it shall not be moved!

"We shall not be moved!"