Testing, learning, sharing and shopping in the Synod Exhibit Hall

In the corner of the exhibit hall at the Baltimore Convention Center, the United Church of Christ HIV and AIDs Network is asking General Synod delegates and visitors to practice prevention, not condemnation.

The group's 'Lead by Example' effort is part of a global campaign by the World Council of Churches encouraging faith leaders from all denominations to get tested for HIV to lower the stigma around disease.

"We're asking clergy to take an HIV test and post a picture on social media," says the Rev. Mike Schuenemeyer, UCC health and wholeness advocate. "We aren't asking them to disclose the result, but rather to make a statement to get tested to know their status. If faith leaders are willing to be part of this, it sends a powerful message that can help ending AIDS as a public health threat."

Visitors can also learn about 'Three Great Loves,' a church-wide initiative growing out of the recent denominational strategic visioning process, in the 'UCC Innovates' area of the exhibit hall. Nichole Collins, from the Office of the General Minister and President, says the initiative hopes to engage the congregations of the denomination in mission work around three great loves: the love of children, the love of neighbor, and the love of creation.  UCC General Minister and President the Rev. John Dorhauer will be kicking off the initiative later during Synod. 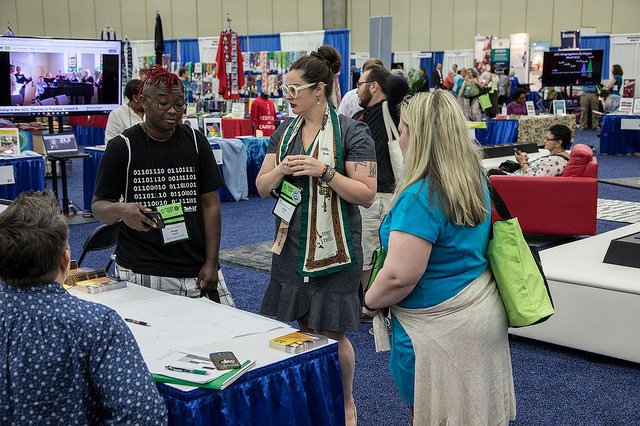 The Central Atlantic Conference is celebrating the 500th anniversary of the Reformation with a display featuring information provided by their German partner church, the Evangelische Kirche in Mitteldeutschland, and with a door representing the Wittenburg church door on which Martin Luther nailed his 95 theses. Visitors are invited to place their own notes on this door describing how their church has reformed or is being reformed. If a Reformation refresher is needed, the folks at the Evangelical and Reformed Historical Society booth can help.

Palm trees mark the Global Ministries and Wider Church Ministries exhibit. With the kickoff of the Caribbean Initiative, there are partners and mission coworkers from Cuba and Colombia present, as well as mission personnel from Kenya, Israel/Palestine and Fiji, and partners from Indonesia, Congo, and Morocco.

UCC Resources has a store where visitors can update their church gear, and there are several vendors offering liturgical books and art. Browsers can also learn about church-related schools, colleges and seminaries. Several UCC agencies, including the Cornerstone Fund, the Mental Health Network, the Disability Ministries, and the Musicians Network have also set up shop.

After walking the hall and visiting the more than 100 participating booths, visitors can relax on the comfy chairs in the Red Resting Room sponsored by Local Church Ministries.

Exhibit hall hours are posted at the hall entrance and on the UCC Synod Events app.