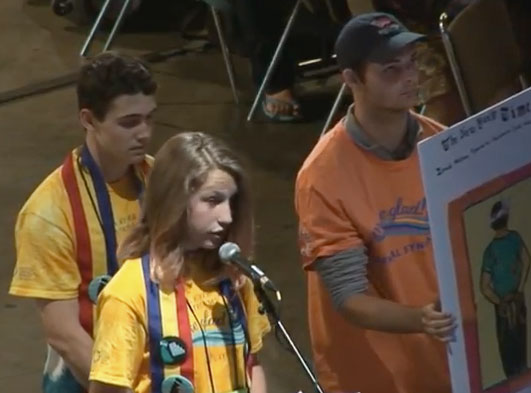 The General Synod of the United Church of Christ is calling for an end to what is being described as "traumatic" practices by Israeli military against Palestinian children.

A resolution, brought forward by 16 individual UCC churches, calls on the state of Israel to guarantee Palestinian children younger than age 18 their basic due process rights and to prohibit any use of torture or ill-treatment of detained juveniles in the occupied territories. Needing two-thirds of the votes from General Synod 2017 delegates, that resolution easily had the necessary support, with 79 percent of the votes in favor.

"The matter of this resolution hits home for me, when a 16-year-old Palestinian America from my home town (Tampa) was beaten unconscious and bloodied by Israeli police — who were never charged. His family has received no justice," said Lorrin Sheppard, a delegate from the Florida Conference. "Unfortunately, his story is like many others."

An estimated 500 to 700 Palestinian children are arrested by Israeli military personnel each year, charged with a crime and prosecuted in a military court system — instead of a civilian court system that is afforded to Israeli children.

"This resolution is about the breath of God in Palestinian children," said Catherine Alder, a delegate of the Central Pacific Conference. "What is happening to them is against international law and against the law of love."

This year is the 50th year of Israel's occupation of the occupied territories — the West Bank (the land to the west of the Jordan River), Gaza (a strip of land along the Mediterranean Sea that borders Egypt and Israel) and East Jerusalem — that it captured in 1967.

Proponents of the resolution — including the UCC Palestine-Israel Network (UCC-PIN), a grassroots group of UCC ministers and lay leaders seeking a just peace between the two peoples — believe that the occupation has created two separate legal systems. Jewish children living in the occupied territories who are arrested are prosecuted through civil courts because they are citizens of Israel.

"These two legal systems treat children of the same age committing the same infraction quite differently," said the Rev. Leslie Schenk, chair of the committee that reviewed the resolution and pastor of Plymouth Congregational UCC in Madison, Wis. "As a young person said eloquently said during our discussion, 'It seems like this should have come out a long time ago. Why hasn't this happened yet?'"

Among the resolution's other calls: for the UCC General Minister and President to communicate the resolution with Israel's Prime Minister and the U.S. Ambassador to Israel, and with U.S. government officials; for the U.S. government to hold aid given to Israel, about $3.1 billion annually, to determine if it complies with the Foreign Assistance Act and isn't used for human rights abuses; for the U.S. to ratify the United Nations Convention on the Rights of the Child, which 194 other countries — including Israel in 1991 — have ratified; and for ecumenical engagement on the issue with Jews and Muslims.

The debate on the floor did include some dissent. Marisa Brown-Ludwig, a Massachusetts Conference delegate, said she "shares the heartbreak of everyone who has spoken [about the treatment of Palestinian children], but there are voices missing. This resolution targets the Israeli side of this tragedy in the Middle East."

Just before the floor opened for debate, youth from the Central Atlantic Conference, participating in the Youth@General Synod program, were given a moment to present their perspective on the resolution — the first of their three presentations during the business sessions at General Synod.

Lucy Adkins, one of the three youth to speak, said, "I go to bed knowing I am safe and protected. Other children are not so fortunate."