Greensboro N.C. church offers sanctuary to mother who could not leave her sons 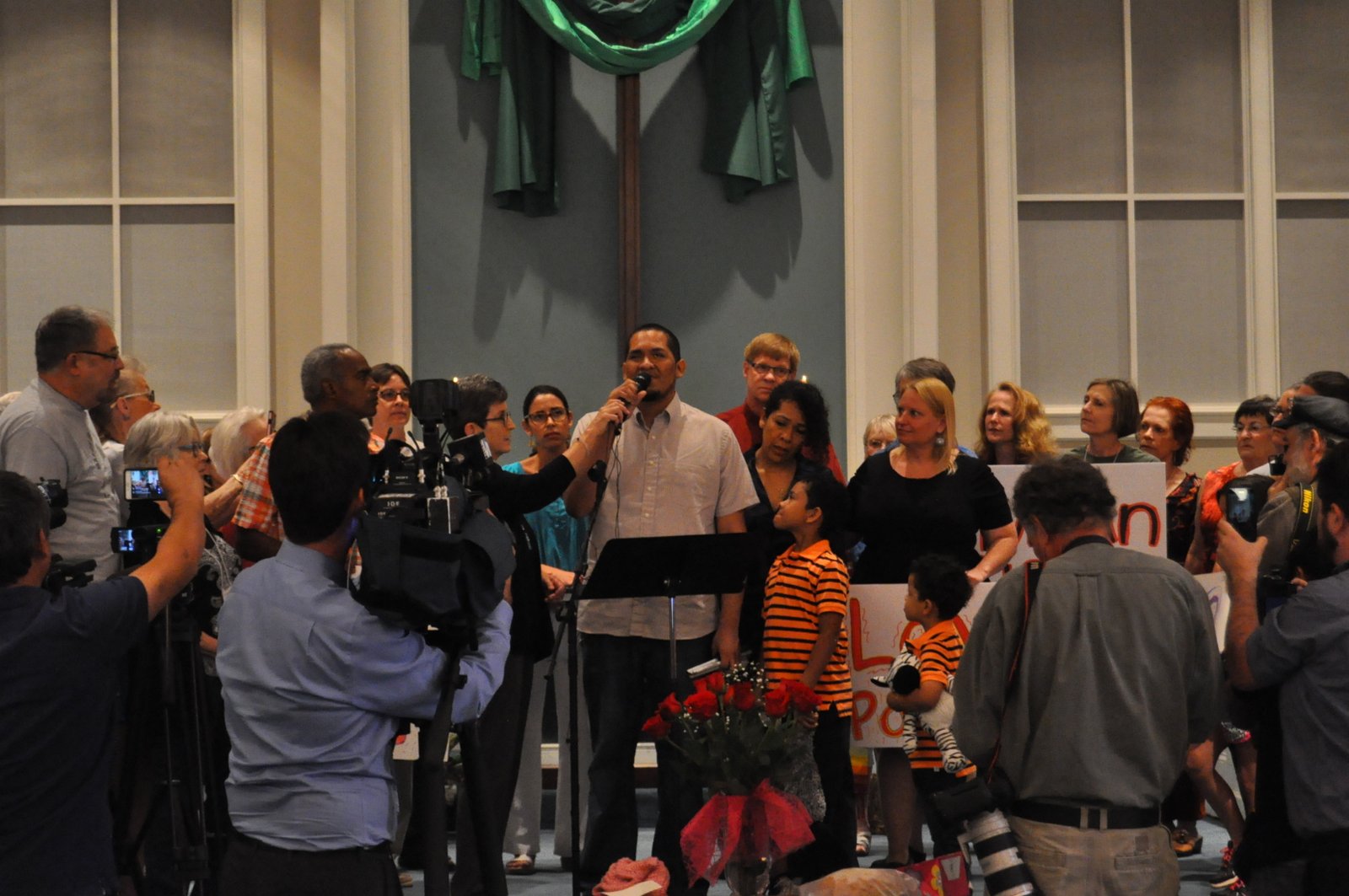 A North Carolina mother, deciding she could not leave her three sons, has gone into sanctuary in a Greensboro UCC church instead of boarding a bus back to Mexico. For Congregational United Church of Christ, taking her in is a response to the call to love your neighbor.

"We have been involved with local efforts in support of our immigrant and refugee neighbors for years, and as we prayed and studied and discussed what next steps we were being called to, we began to have a clear sense of being called to offer sanctuary," said the Rev. Julie Peeples, Congregational UCC pastor. "Since January, we have heard an increasing number of stories of immigrants living in great fear, and of families being torn apart, children targeted and parents suddenly whisked away. People who had been granted asylum previously, and who reported dutifully each year to ICE suddenly are being told they have one month to leave. When we heard of Minerva's compelling story and met with her and her beautiful family, that calling was confirmed. This is another way we can love our neighbors."

Minerva Cisneros Garcia has lived in Winston-Salem for 17 years, arriving from Mexico fearing for her safety with her blind son, Eduardo, now 21 and a DACA recipient, in hopes of finding him support and educational opportunities he would not have received back home. She has two younger sons, U.S. citizens, Antonio, age six, and Matteo, age three.

In 2013 Garcia was granted a stay of removal by U.S. Immigration and Customs Enforcement (ICE) due to her son’s needs, which has been re-granted each year since. At her annual check-in on May 25, ICE agents told her she had to leave the country by June 30. She bought a bus ticket for June 28, but decided not to use it.

She is the second undocumented immigrant to enter sanctuary in North Carolina, and the tenth currently in sanctuary in this country.

"As the faith community, we are doing what Congress has refused to do: protect immigrant families from an immigration system that is separating families and deporting people who are woven into the fabric of their communities and congregations," Peeples said. On Thursday, June 29, she and her community welcomed Minerva and her sons into their family with prayer, blessings and a promise. "We join with other sanctuary churches in 'amplifying the moral imperative’ to bring an end to deportations and stop the severe harm being done to families."

"Members of Congregational UCC presented Minerva's family with bread, flowers, shawl of welcome," said the Rev. Craig Schaub, pastor of Parkway United Church of Christ in Winston Salem. He and his congregation have been supporting the Garcias since ICE agents told Minerva she was facing deportation.

Schuab said at a press conference Thursday morning, "Her son Eduardo spoke, saying, 'all the times she met with officials in Charlotte, I couldn't speak. Now I get to speak. I still need my mom. I need her here.’ We'll continue to encourage Senator Tillis to act, continue to get signatures on the petition, continue to invite donations and manage the You Caring Fundraising site, and support Congregational in any way we can in their beautiful hospitality."

Garcia’s family and supporters in the Winston-Salem Sanctuary Coalition are calling on Sen. Thom Tillis to personally request that ICE stay her deportation, and continue granting her deferrals until the government creates a way for her to obtain legal status. "This isn’t a partisan issue, this is a human rights issue," said Kim Porter of the Sanctuary Coalition.

Peeples, who said she would like to be with members of the wider church at General Synod this week, hopes that delegates strongly consider becoming an Immigrant Welcoming Church.

"A strong UCC resolution would add a critical voice to this," she said. "We are facing a humanitarian crisis, with fear skyrocketing as deportations increase. With the Trump Administration's decision to consider all undocumented immigrants 'criminals,’ no one is safe. Not even a single mother of 3 children. Lives are being torn apart for no reason, and if we claim to be a justice-oriented church, we cannot be silent."