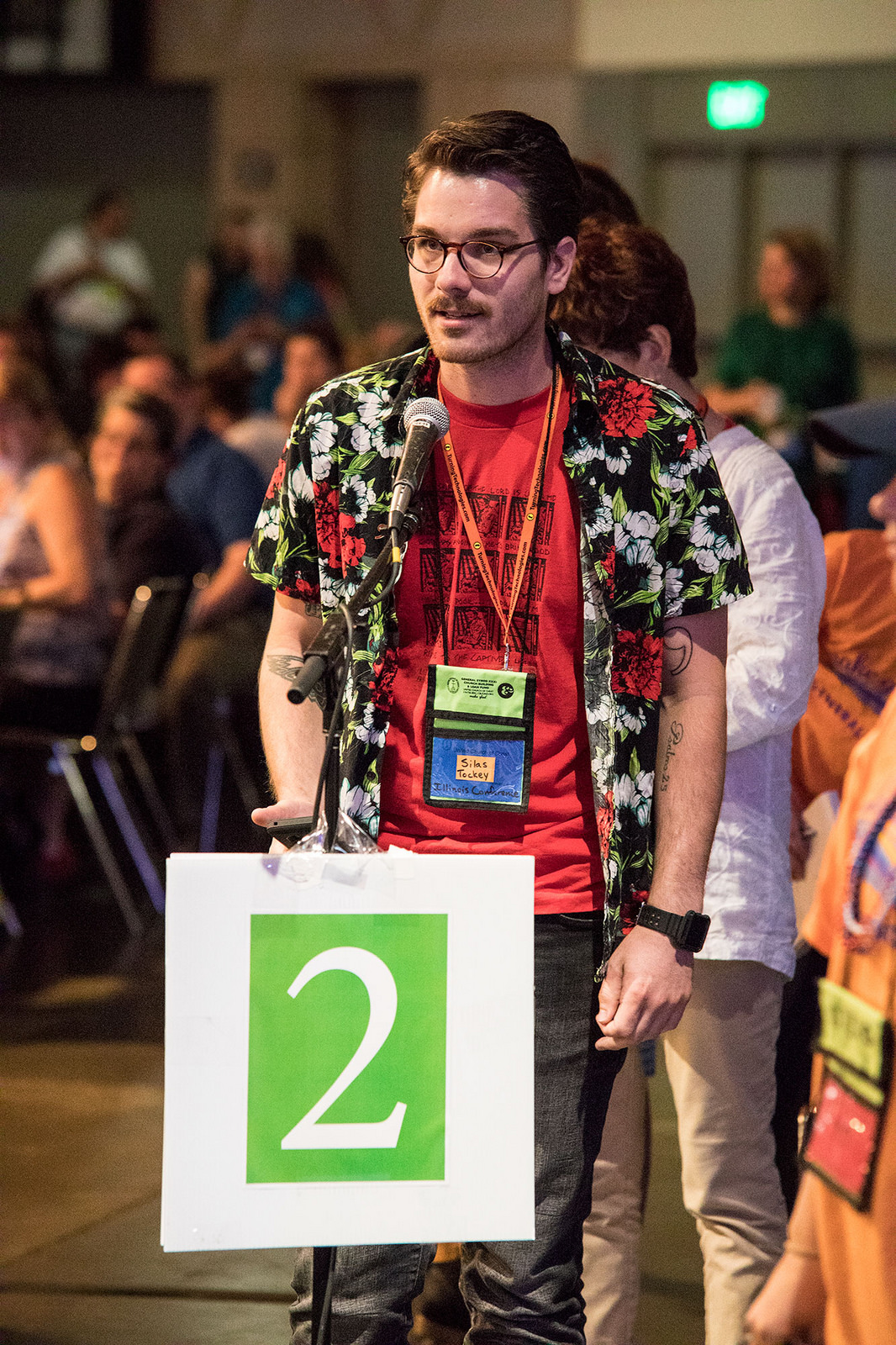 Delegates to the United Church of Christ's General Synod 2017 voted in favor of a resolution advocating for economic justice, including calling for churches to support legislation that raises the minimum wages to $15 per hour. The final resolution was a combination of two resolutions brought before Synod for consideration.

The two resolutions were combined due to similarities in their intent. One resolution sought "a just economy where all jobs pay a living wage" including a specific bulleted item suggesting "raising the minimum wage." The other resolution specifically called on churches to advocate for legislation to raise minimum wages to $15.

Committee Chair Robert Thompson said the committees worked hard to combine the language of the two resolutions in a way that preserved the intent and nature of both.  "As faithfully as we could," said Thompson, "we tried to keep the key point in both original resolutions."

The final resolution brought to the floor called upon "member churches of the United Church of Christ to examine their compensation of part-time and full time staff to assure that each is paid at least $15 per hour, or plan to reach that minimum compensation by 2019." The proposal also called all settings of the church to advocate for $15 minimum wage laws.

Edith Rasell, minister for Economic Justice for the UCC Justice and Witness Ministries, spoke to the committee on Friday. "Full employment, a job for everyone that wants one, is actually considered a human right, a fundamental thing that everyone has a chance to contribute their gifts to society," she said.

Rev. Kari Nicewander, a pastor from Connecticut, also addressed the committee in favor of minimum wage advocacy. While explaining that Connecticut has a high minimum wage at $10.10 per hour, Nicewander said that full time earnings of $1750 per month did not equal the average cost of an apartment in the state.

"Raising the minimum wage is something we need to do as faithful people to make sure that people can afford what they need," said Nicewander.

Just before the floor opened for debate, youth participating in the Youth@Synod program were given a moment to present their perspective on the resolution — the last of their three presentations during the business sessions at Synod.

Emma Davis, from the Central Atlantic Conference, told a story about her friend's mother who works full time for a low wage and does not have time to care for the home. She said the lawn is not mowed, and the neighborhood penalizes them for this. "The neighbors have no compassion and only judgment."

Rev. George Miller, a Florida delegate, asked if church leaders were prepared to go back to their churches and make sure church staff were paid $15.

"I don't think we can tell others what to do in their homes until we're taking care of our homes first," he said.

Reminding delegates that $15 minimum wage does not put a family of four over the federal poverty line, Rev. Marilyn Kendrix, a Connecticut delegate, said, "Our extravagant welcome to all God's people requires more of us than merely welcoming them to our sanctuaries on Sunday. It requires us to welcome everyone to share in the blessings of God."

And though most of the speakers on the plenary floor raised concerns about the impact of this resolution, the measure passed with 75% approval.