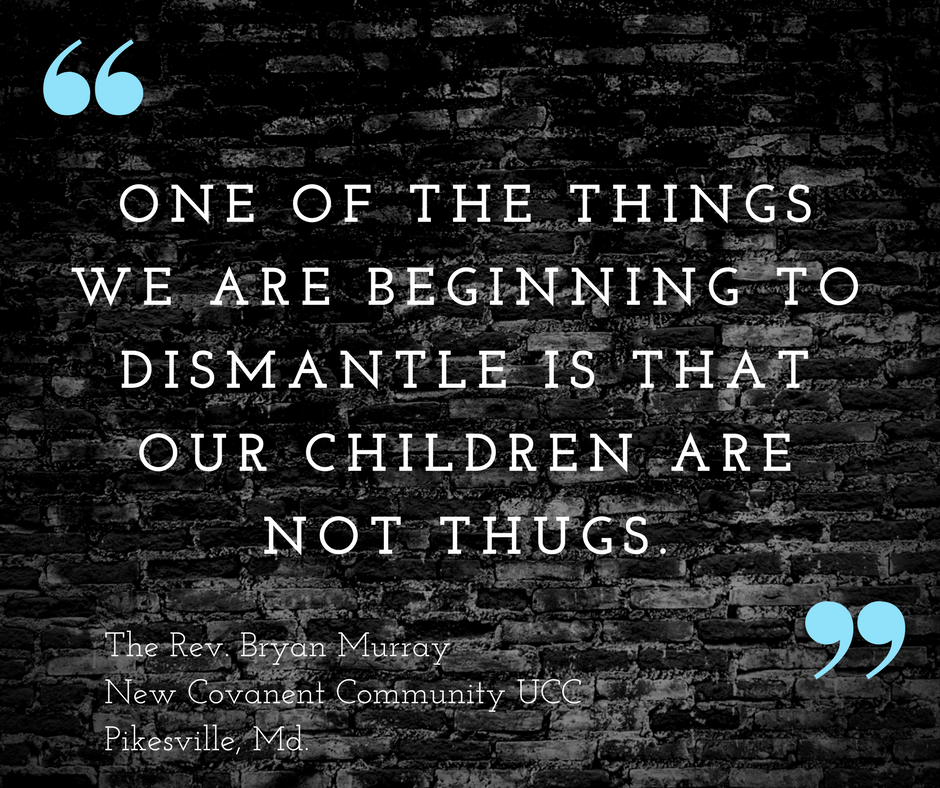 Two years after Freddie Gray died while in the custody of Baltimore police officers, United Church of Christ General Synod participants gathered with local leaders and activists to learn about the circumstances that led to the young African American’s death and consider how the city could unite going forward by confronting systemic racism.

About 50 people attended the Thursday program, “Baltimore: Before and After Freddie Gray,” a day before the start of General Synod 2017 in the city. Organizers hoped that the Synod stage would enable the lessons learned in Baltimore to be shared with a wider audience.

"We want to make sure we were being a good partner with those on the ground addressing the needs of people impacted by injustices, not only what happened two years ago but what has happened historically," said the Rev. Marvin Silver, associate conference minister for the Central Atlantic Conference, which organized the event.

"We're hoping to be a catalyst to move toward a new justice movement in the Central Atlantic Conference that recognizes the realities of this region," Silver said. "With General Synod in Baltimore, it's an opportunity for people to get to know who we are, and for the wider UCC to learn from the people in Baltimore who are working on racial justice, accepting their leadership and developing a partnership to work alongside them."

Baltimore police arrested Gray, 25, in April 2015. He fell into a coma while being transported in a police van, and was taken to a hospital where he died seven days later from spinal cord injuries. Six police officers involved in the incident were charged with homicide, for failing to secure Gray in the back of the transport vehicle. Three were acquitted, and charges against the remaining three were dropped.

"Freddie was a symptom of what had been festering in the city for decades," said Betty Robinson of Baltimore, a member of Showing Up For Racial Justice, a national network that organizes white people to promote racial justice.

"The news will tell you [Freddie Gray] had 23 arrests. The reality doesn't tell you that in Baltimore, 23 arrests does not mean 23 incidents of criminality," said Rev. Brian Murray, pastor of New Covenant Community UCC, Pikesville, Md. "So when he made eye contact with law enforcement that Sunday morning, he did so with a sense of mistrust and fled. And law enforcement sees that and captures him."

"One of the things we are beginning to dismantle is that our children are not thugs," Murray said.

The event began with a virtual historic tour featuring the short film "Blackonomics: Housing," which captured the economic disparity in Baltimore through the lens of housing affordability.

Blacks make up about 65 percent of the city's population and earn about $1 billion, in total, more than whites, City Councilman Ryan Dorsey, a lifelong resident, noted. But, he said, black households, on average, earn about half of white households do on an annual basis, highlighting some of the underlying challenges that the city faces.

Other panelists described how Baltimore has lapsed in investing in education, affordable housing and infrastructure. They also called on faith communities to be more vocal in calling out racism and white privilege.

"Every one of us, faith community or not, has an obligation to speak the truth, and the truth is that structural racism is 100 percent in the foundation of this country. And we need to discuss this in every temple, from city hall to the synagogue to the Catholic parish to the nondenominational church to the living room," Dorsey said. "We all have to put our own prosperity on the line."

Murray said he thinks the UCC does a good job confronting the issue, pointing to “this panel, being part of the Black Lives Matter movement, and diving into white privilege. But one of the things we have to do, as the church in general, is to understand that faith costs you something. The conversations about racism cannot be a group of black people talking to the mainstream. And we've got to call out at every opportunity those who would look at another human and judge if they are their equal."

Silver concluded the gathering by reminding the audience that systemic racism as described by the panel isn't limited to Baltimore. "You may have an opportunity to go back," he said, "and address these types of problems in your state, and your city. It's a conversation that will continue."